Although much criticized, the concept of sovereignty is still central to most thinking about international relations and particularly international law. The concept is condemned in context of a nation-state’s “right” to monopolize certain exercises of power with respect to its territory and citizens but it is still prized by those who maintain certain “realist” views or who otherwise wish to prevent (sometimes with justification) foreign or international powers and authorities from interfering in a national government’s decisions and activities.

Don't use plagiarized sources. Get your custom essay on
“ Importance of sovereignty ”
Get custom paper
NEW! smart matching with writer

It cannot be ignored that sovereignty is an essential ingredient of the State as it makes the State supreme in both internal and external matters.

A State can only be independent if it enjoys sovereignty. Furthermore, when one begins to analyse and disaggregate the concept of sovereignty, it quickly becomes apparent that it has many dimensions and several important functions. For example, the concept is central to the idea of “EQUALITY OF NATIONS”. The concept of equality of nations is linked to sovereignty concepts because sovereignty has fostered the idea that there is no higher power than the nation-state, so it is “sovereignty” that negates the idea that there is a higher power, whether foreign or international (unless consented to by the nation-state).

Sovereignty also plays a role in defining the status and rights of nation-states and their officials. Thus, we recognize “SOVEREIGN IMMUNITY” and the consequential immunity for various purposes of the officials of a nation-state.

Similarly, “sovereignty” implies a right against interference or intervention by any foreign (or international) power.

Therefore, one can easily see the logical connection between the sovereignty concepts and the very foundations and sources of international law. If sovereignty implies that there is “no higher power” than the nation-state, then it is argued that no international law norm is valid unless the state has somehow “consented” to it. Of course, treaties (or “conventions”) almost always imply, in a broader sense, the “legitimate” consent of the nation-states that accepted them. One classic exception may be the end-of-a-war treaty, at least in some circumstances. In addition, there are sticky problems in connection with state succession, including whether the colonial imposition of obligations carries over to a newly independent state.

Broadly speaking we can analyse the importance of sovereignty as:

Sovereignty is the supreme power over all individuals and associations. The State is able to control and regulate the activities and subsequently the behaviour of individuals as well as associations because it can punish anybody with its sovereign rights.

Sovereignty is the most important feature which differentiates the State from other associations which have no sovereign power.

The State can maintain unity and integration when it has supreme powers. Society will become worse and mutual disputes will occur without sovereign power in the State.

Sovereign authority is essential to maintain order in society. Without sovereignty, anarchy will prevail in society and there will be chaos and disorder.

State exists, survives and continues only when there is sovereignty.

The State can give protection to the citizens from any external threat or internal disturbances with its sovereign power. It is the responsibility of the State to create an atmosphere of peace and security in the society. One State controls and curbs any anti-social qne qnti-national elements since it possesses coercive power.

The State cannot make and implement laws in the absence of sovereignty.

A country can be independent only when it has sovereignty. Sovereignty makes the State to run trade and commerce freely and frame its foreign policy for the sake of welfare of people. 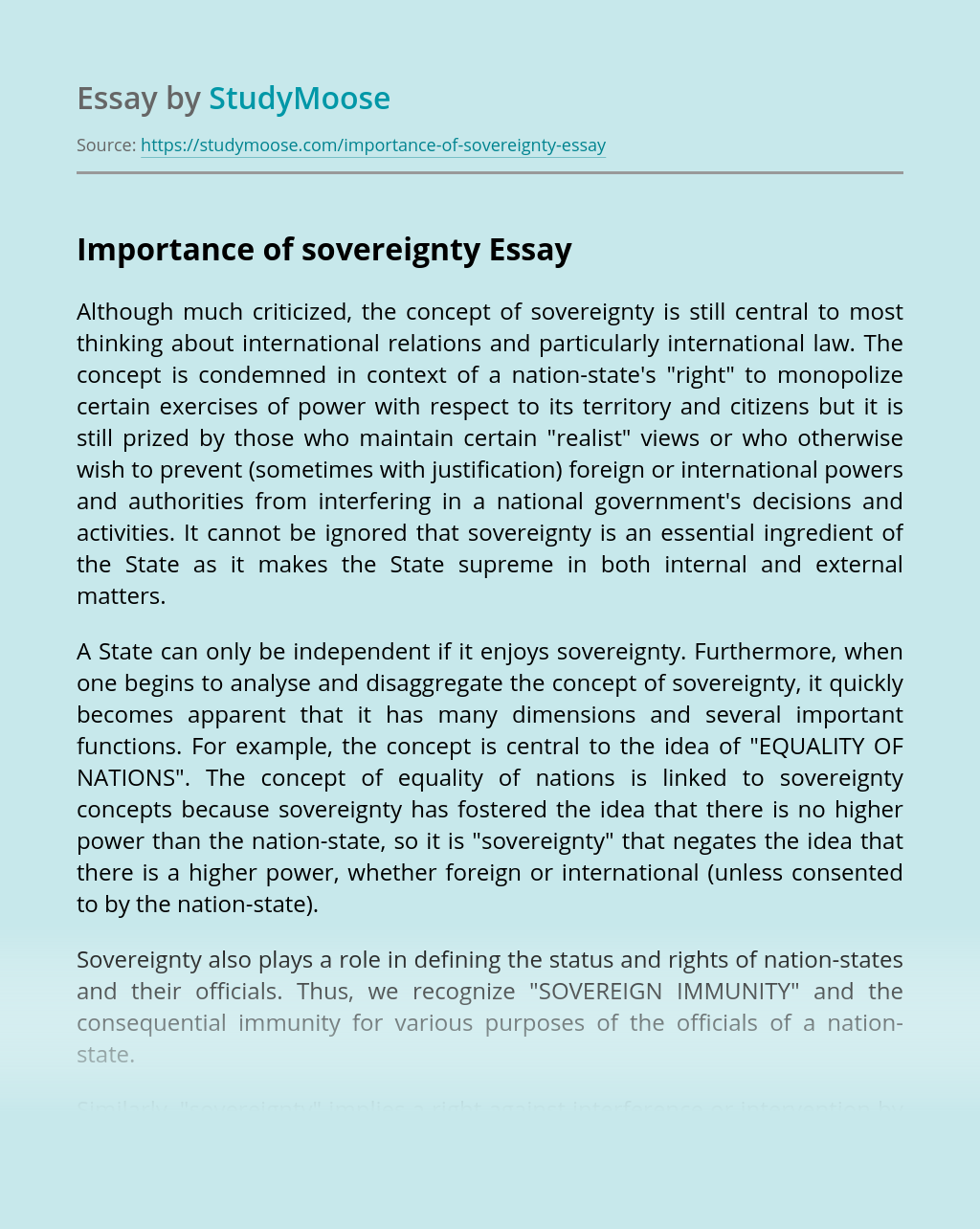