Something the Lord Made

Vivian Thomas was a black man living in a time of great prejudice in our country. He was very intelligent and skilled in the field of medicine and was an asset to the scientists and doctors trying to find a cure for the “blue baby” syndrome. He had great determination and humility while being faced with prejudice from so many people and is an inspiration to not only the African American scientists and medical professionals who followed him, but for many people even today who hear his story.

Don't use plagiarized sources.
Get Your Custom Essay on Something the Lord Made Just from $13,9/Page

Vivian Thomas’s talents and character traits were given to him by God to be used even in the face of so many trials, and I believe, after hearing his story that God uses the trials in our lives to make us into the people he wants us to be. Throughout his life and his career, Thomas was faced with the prejudice and persecution against African Americans in the country at the time.

The United States was segregated and many laws made it difficult for a black man or women to follow their dreams.

Thomas was not only looked down upon by many in the medical field because of his race, but was even betrayed by the man he considered a friend and mentor, after proving to be an asset to their studies. The trials he faced made it difficult for him and were discouraging as he worked hard to succeed, but I think that it was because of these trials that his character traits of humility and determination were developed. In times of trial, discouragement, and despair, it is difficult to persevere in the faith and continue to follow God and his plan for your life. Sometimes we think that our plans must lead down a better road, or that God must not love us enough to protect us from this pain we feel, but God actually uses the painful experiences to further develop our character.

Vivian Thomas could have given up when it became too discouraging, but instead he persevered and became an inspiration to many people. During times that are hard, God teaches us more about life, ourselves, and most importantly, about Him. Sometimes it is even necessary to go through a difficult time before we are able to realize the ways in which we need to grow and develop. James 1:2-3 says, “Consider it pure joy, my brothers and sisters, whenever you face trials of many kinds, because you know that the testing of your faith produces perseverance.”

This verse shows us that though it may not seem good at the time, every trial we face should be welcomed because when our faith is put to the test, traits such as perseverance are developed in our lives. In fact, how can our faith grow if we never know what it feels like to stand on God alone after everything else is stripped away? The difficult times in our lives are used as tests to see how strong our faith is, and to make us stronger.

It was an encouragement for me to see the way Vivian Thomas lived his life with perseverance, humility, and determination, even in the face of prejudice and opposition. It was easy to see how God used the trials in his life to develop him as a person and his story can encourage others to do the same in the midst of trials. When we trust God and persevere through the hard times in our life, not only will God strengthen our faith, but we can be an example and tell others our story to help them through the trials in their lives. Trials do not last forever, but God’s love is never ending.

Something the Lord Made. (2016, Nov 25). Retrieved from https://studymoose.com/something-the-lord-made-essay 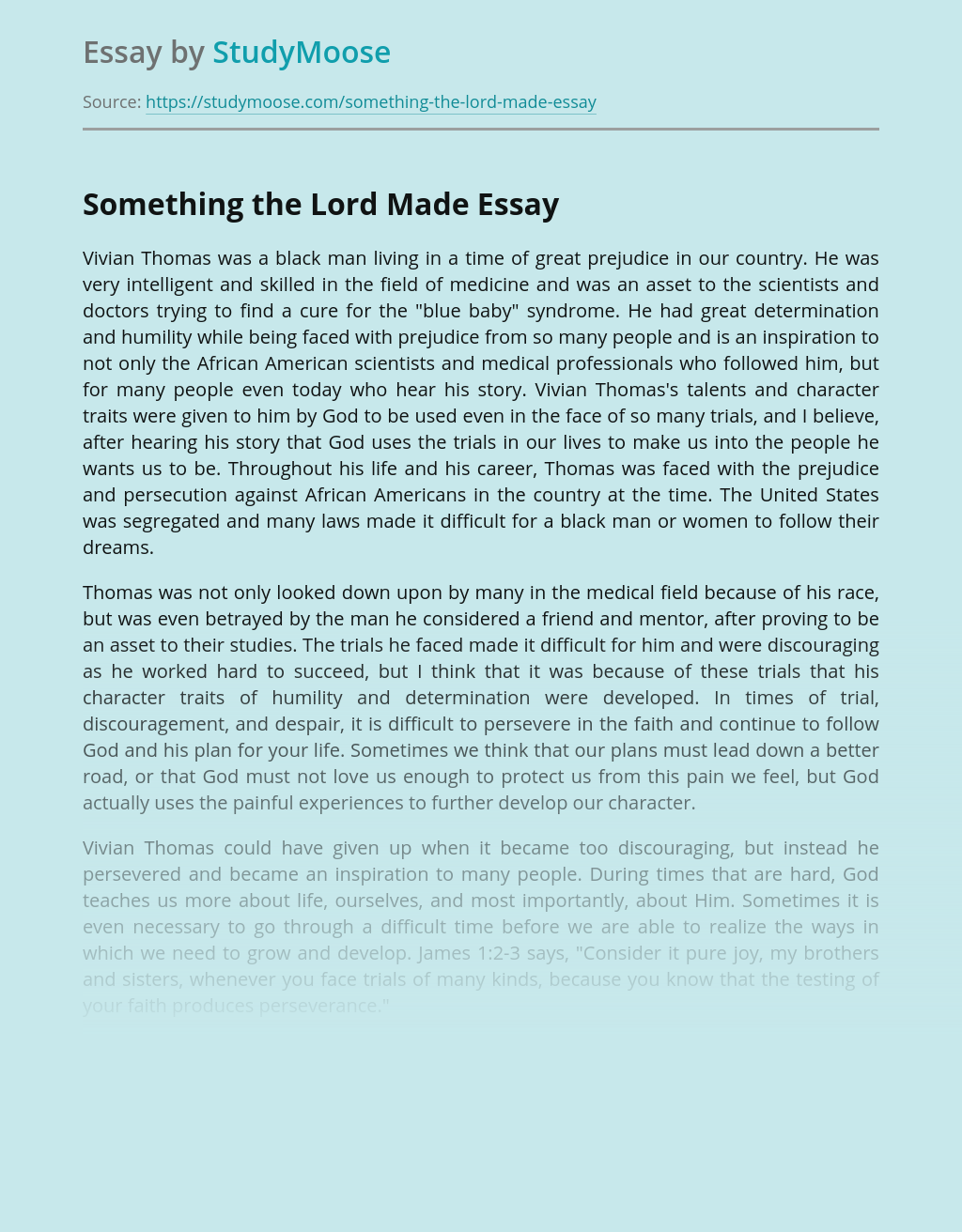 All world religions face unmatched times in the 21st century. The obstacles are varied and do not have easy solutions. The modern world has actually seen an amalgamation of worldwide worth systems and a comparable confluence of socio-political ideologies and viewpoints because of advances in infotech and the increased mobility made possible by modern technology....

Between 100 and 600 C.E., Rome underwent significant cultural and political changes. Culturally, the empires religious beliefs had changed, resulting in the predominance of Christianity. Politically, Rome’s economy divided. As for continuities, paterfamilias and women’s right remained the same throughout the time period. Religion was a large part of the roman culture, and made a...

Crisis and Trauma Counseling Introduction             Wright who is the author of this book begins by discussing his own individual dilemma where he had to make a decision. Wright narrates a life story which serves as a basis through which the human decision making subject is built. Wright uses this approach to relate to his...

Mullin Herbert Mullin was born in Salina California which happens to be the anniversary of the 1906 San Francisco earthquake as well as Einstein’s death. He was the youngest between him and his sibling, Patricia. He was raised by both parents Jean and Bill Mullin. He didn’t have any problems in school he was popular...

SOCIALIST The word socialist was added to the Preamble by the 42nd amendment act of 1976, during the Emergency. It implies social and economic equality. Social equality in this context means the absence of discrimination on the grounds only of caste, colour, creed, sex, religion, or language. Under social equality, everyone has equal status and...