Acid rain is a major global issue for many reasons. It is formed when greenhouse gases, specifically nitrogen dioxide, carbon dioxide and sulphur dioxide, dissolve into rainwater, making it acidic. These gases are formed due to mainly burning fossil fuels, this is done to create energy used for many things such as vehicles, factories house energy needs, etc.. Rainwater is naturally slightly acidic due to natural carbon dioxide releases such as respiration in all living things. However, when greenhouse gases are released in such large amounts, rainwater becomes unnaturally acidic and this causes many problems.

Don't use plagiarized sources. Get your custom essay on
“ Solar Panels vs Acid Rain ”
Get custom paper
NEW! smart matching with writer

One main problem is the destruction of trees and plants. The acid in the rain reacts with trees and plants and damages them, sometimes killing them. Another big issue is the impact acid rain has on sealife.

When acid enters lakes, rivers and seas, it lowers the pH of the water making it harmful to many aquatic species and damaging many aquatic plants and coral reefs.

Acid rain also has an impact on buildings and statues mainly ones made out of limestone and marble. Acid has a corrosive effect on marble and limestone meaning the acid rain will wear down statues and buildings made from these rocks. Although acid rain is a big issue, there are many ways of reducing it. One of these is the use of solar panels. Solar panels are a way of making energy in a more eco friendly manner. In a lot of countries, the main way of making energy is burning fossil fuels, which releases greenhouse gases.

However, with solar panels, energy is made through solar energy, without any releases of greenhouse gases. But how do solar panels work? Solar panels work by particles of light, also known as photons, knock electrons so they become free of atoms, creating a flow of energy. Solar panels are made up of many small units called photovoltaic (meaning the conversion of light into energy) cells. Each cell is made up of two layers, one with a positive charge and one negative charge, this is so that the energy can flow in one direction. Conductive metal is found on either side of a cell, the metal attracts the freed electrons and transfer them into wires so they can be used as electricity for many different purposes. Many of these cells attach to each other creating a solar panel.

Solar panels also have very low maintenance cost and do not need maintenance often, adding to them being economically sustainable. They usually have a 20-25 year warranty, showing that they do not damage easily and the wires, which are usually fairly cheap, have to be replaced every 5-10 years. This is very good in comparison with other renewable energy methods such as wind turbines which usually need expensive maintenance every year. Because solar panels are economically sustainable, it means that they can be used in mass, creating more energy. It also means that they can be used in almost every country, including LEDC (less economically developed countries), these countries may not be able to afford other expensive renewable energy methods so solar panels would be a good choice. Because solar panels can be used in most countries, it means an extremely large amount of solar panels can be used resulting in a bigger positive impact on the environment.

Although solar panels have many benefits, they also come with some limitations. One of these is that they are weather dependent. This means they work efficiently depending on the weather. Solar energy is still absorbed on a cloudy day but a much smaller amount than on a sunny day. Because of this, solar panels would probably be very inefficient if they were used in countries with very little sun. This reduces the amount of solar panels that can be used. It also proves that countries cannot be completely dependant on solar power as an energy source as there might not be enough energy produced if a country does not get a lot of sun. Another limitation is that solar energy is not easily stored.

You can store solar energy in large batteries, however these batteries are extremely expensive. Storing solar energy is important because if you can store it, it can be used during the night as no solar energy would be produced in the night as there would be no sun. Because storage it is expensive LEDCs would probably not be able to afford it (or at least not for many solar panel farms) which means they wouldn’t be able to be completely dependent on solar power.

Because of this and because other renewable energy methods are usually very expensive, LEDCs would probably be more dependent on burning fossil fuels as an energy source which contributes to acid rain rather than reducing it. Solar panels can be considered inefficient in some ways. This is because there needs to be a lot of solar panels to create a large amount of energy. This means that to be reliant on solar power, you need to have a lot of solar panels which takes up a lot of space and can be expensive if they are bought in mass. Because of this, solar panels might not be very efficient in a lot of countries, making it much harder for those countries to produce energy that results in no harm done to the environment. In conclusion, I believe that the use of solar panels can have a global reduction on the impacts of acid rain as it reduces the amount of greenhouse gases released into the air because it produces energy without burning fossil fuels.

However, I think that solar panels should only be used in countries that they would be efficient in. By this I mean that they should only be used in countries that recieve large amounts of sun and that have the right resources to install them. I think this because if they were used in countries with very low sunlight, it would not be worth it as they wouldn’t produce a lot of energy and they could be a waste of money that could be used on more important matters. Countries that don’t recieve a lot of sun should, in my opinion, rely more on other renewable energy methods such as wind power or hydroelectric power because those methods would be more efficient. 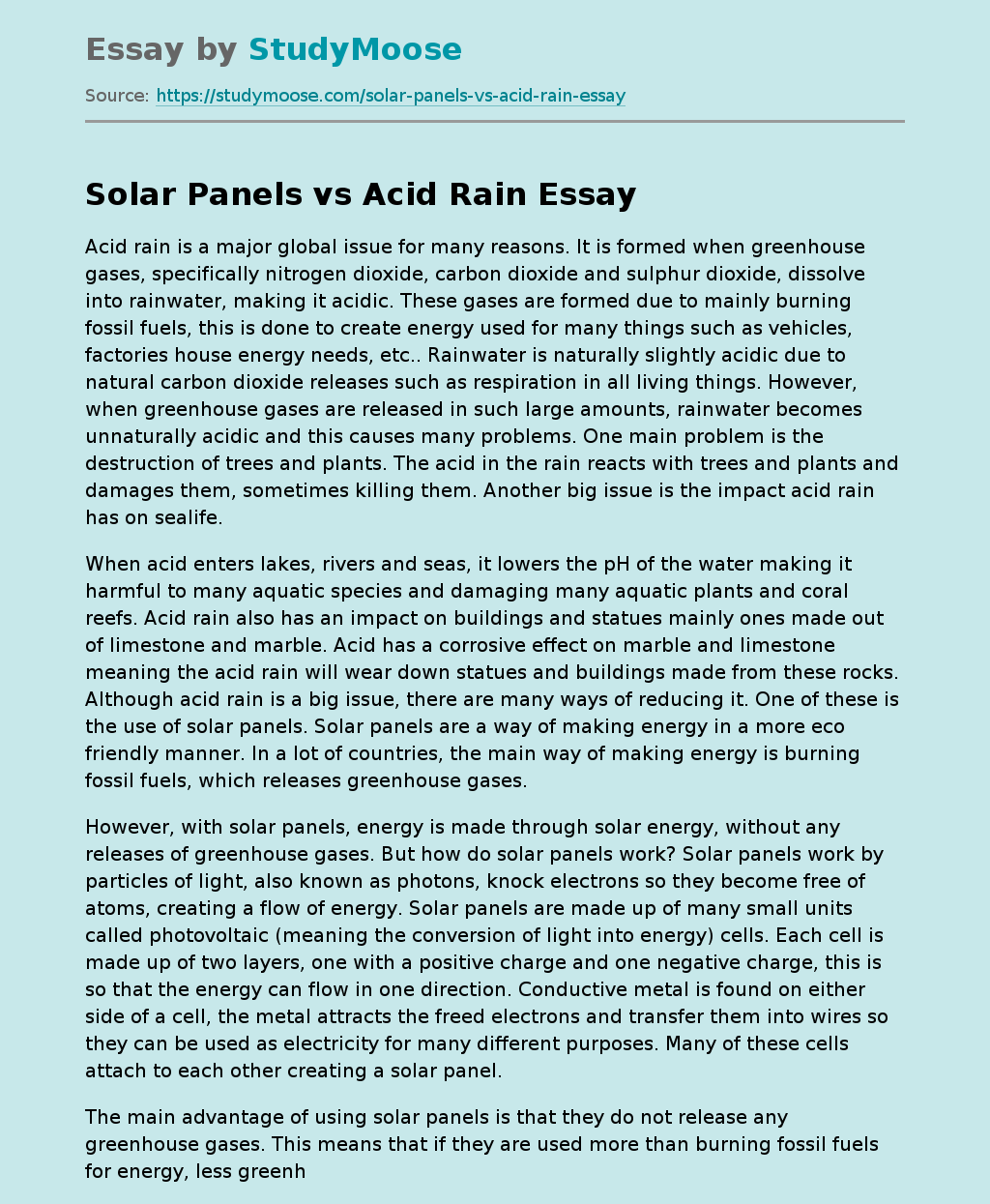