Chief Matenje is an example of corrupt leadership – particularly, the corrupt and oppressive leadership seen on the African continent. He is the antagonist and villain of the novel “When Rain Clouds Gather”. When we are first introduced to Chief Matenje, he is referred to as the “troublesome and unpopular brother” of the “paramount chief named Sekoto” (Head 2008:18). Chief Sekoto appointed Chief Matenje as the subchief of Golema Mmidi, a small, rural village in Botswana. He is extremely disliked by the villagers because of his “overwhelming avariciousness and unpleasant personality” (Head 2008: 18).

Don't use plagiarized sources. Get your custom essay on
“ When Rain Clouds Gather ”
Get custom paper
NEW! smart matching with writer

Chief Matenje’s unattractive and hard appearance is influenced by the angry, tortured and negative life which he had lived. He is described as having a “long, gloomy, melancholy, suspicious face” (Head 2008: 43). When the protagonist, Makhaya Maseko, first meets the Chief, he sees the face of a “tortured man” with “scarred deep ridges across his brow and down his cheeks” (Head 2008: 65). He notes that this is the face of a man who has only experienced the “storms and winters of life, never the warm dissolving sun of love” (Head 2008:18).

He used a number of items, including “a high-backed kingly chair” and “a deep, purple tasselled and expensive gown” (Head 2008: 62), to display this image. He even wished to display this royalty in his actions. When he first meets Makhaya, his descent down the steps of his house is described as “regal, kingly, spectacular” (Head 2008: 62). However, Makhaya sees right through this behaviour – he notices the “sham of it all” and it “instantly arouses his sympathy” (Head 2008: 62).

Chief Matenje lived a lonely life “in a central part of the village in a big, cream-painted mansion” (Head 2008: 41). He had previously been married but his wife divorced him and kept their two children. While he had lived alone for many years, he had recently “acquired a guest and friend in a certain politician called, Joas Tsepe” (Head 2008: 41). However, Matenje was still not happy. He felt insecure and unsettled in the village. He was very conscious of the fact that the villagers disliked him and his leadership.

Matenje was a traditionalist who was very conscious of the tribal divide. We see on page 43 (Head 2008) that he “understood tribalism” and he “commanded the largest following of diehard traditionalists”. He disliked his brother, Chief Sekoto, immensely because he felt “the chieftaincy should be his” (Head 2008: 43). He saw his brother as an “amiable, pleasant nitwit” (Head 2008: 42) – the very opposite of what he perceived as a good leader. He saw “arrogance and pride” as being “part and parcel of the bearing of a great chief” (Head 2008: 42).

Matenje’s dislike of his brother, Chief Sekoto, was so intense that he was even involved in a plan to assassinate him. When Chief Sekoto found out about the assassination plot, he brushed it aside and instead gave his brother the post of administrator in the village. However, Chief Matenje was still not able to let go of his hatred. He went on to transfer this extreme hatred for his brother to the villagers of Golema Mmidi (Head 2008: 43). The villagers were very conscious of this hatred. Even though they “politely addressed Matenje as ‘Chief’” (Head 2008: 18), they “avoided him as much as possible” (Head 2008: 44).

Chief Matenje saw himself as more important and superior to the people of the village. We see this clearly in a meeting between Matenje and Dinorego (an old resident of Golema Mmidi). When Dinorego greets Chief Matenje, Dinorego’s greeting “was dismissed with a slight gesture of the head, which contained in it an inheritance of centuries of contempt for the ordinary man” (Head 2008: 65). On page 185 and 186 (Head 2008), we see that Matenje is unable to see people as people.

Instead he saw them as “pawns to be used by him, to break, banish and destroy for his own entertainment”. Furthermore, the greatest moments of his life had occurred when “he had inflicted suffering on his fellow man” (Head 2008: 185). This is the sad truth of Chief Matenje’s life. However, the author suggests that perhaps Matenje behaves in this way simply because he doesn’t know anything different. She states that “this was the tradition in which he had grown up and maybe he could not be blamed for taking full advantage of it” (Head 2008: 186). While Matenje sees himself as superior to the villagers, he feels inferior to individuals who occupy positions of superiority.

After Matenje’s death, Gilbert is particularly troubled by the “pathetic way in which Matenje always backed down when confronted by a superior” (Head 2008: 193). We also see on page 74 (Head 2008), that Matenje “walked out crumpled” when he discovered that Makhaya had been granted a residence permit and that “particularly someone in a superior position could make him crumple in this way”.

In the end Matenje recognises that he is evil – “he was an evil pervert and he knew it” (Head 2008: 186). Before he committed suicide, it seems he did feel some remorse. After he has barricaded himself in his house, he stood there “crying like a forlorn and lonely child” (Head 2008: 186). At first, Chief Sekoto viewed his brother’s suicide as an inconvenience – “oh, oh the mess and fuss and brother” (Head 2008: 189). Later however, he stops “play-acting” and is “genuinely upset” by his brother’s death (Head 2008: 190).

Chief Sekoto wonders if his brother had suffered simply because “he wanted more things than a man should desire for one life” and that he had been “the helpless victim of terrible, private hungers” (Head 2008: 189-190). The villagers too feel a sense of loss for the Chief after his suicide. We see that he was in “all of their thoughts, hovering like a great, unseen shadow over the whole village” (Head 2008:192-193). Even Makahaya thinks that “you couldn’t ever forget Matenje, not once you had met him face to face” (Head 2008: 193).

In the end, it is mostly pity that the characters are able to feel for Matenje. He has very few good qualities that they could remember. Even the author wonders “what’s there to hold onto except a terrible pity?” (Head 2008: 192). Matenje is a memorable character who had an acute impact on the lives of all the individuals he came into contact with. They are unable to forget him – even after his death. It is only in death that he finds some redemption and forgiveness from the villagers – “you have to be loved a bit by the time you die” (Head 2008:
192). 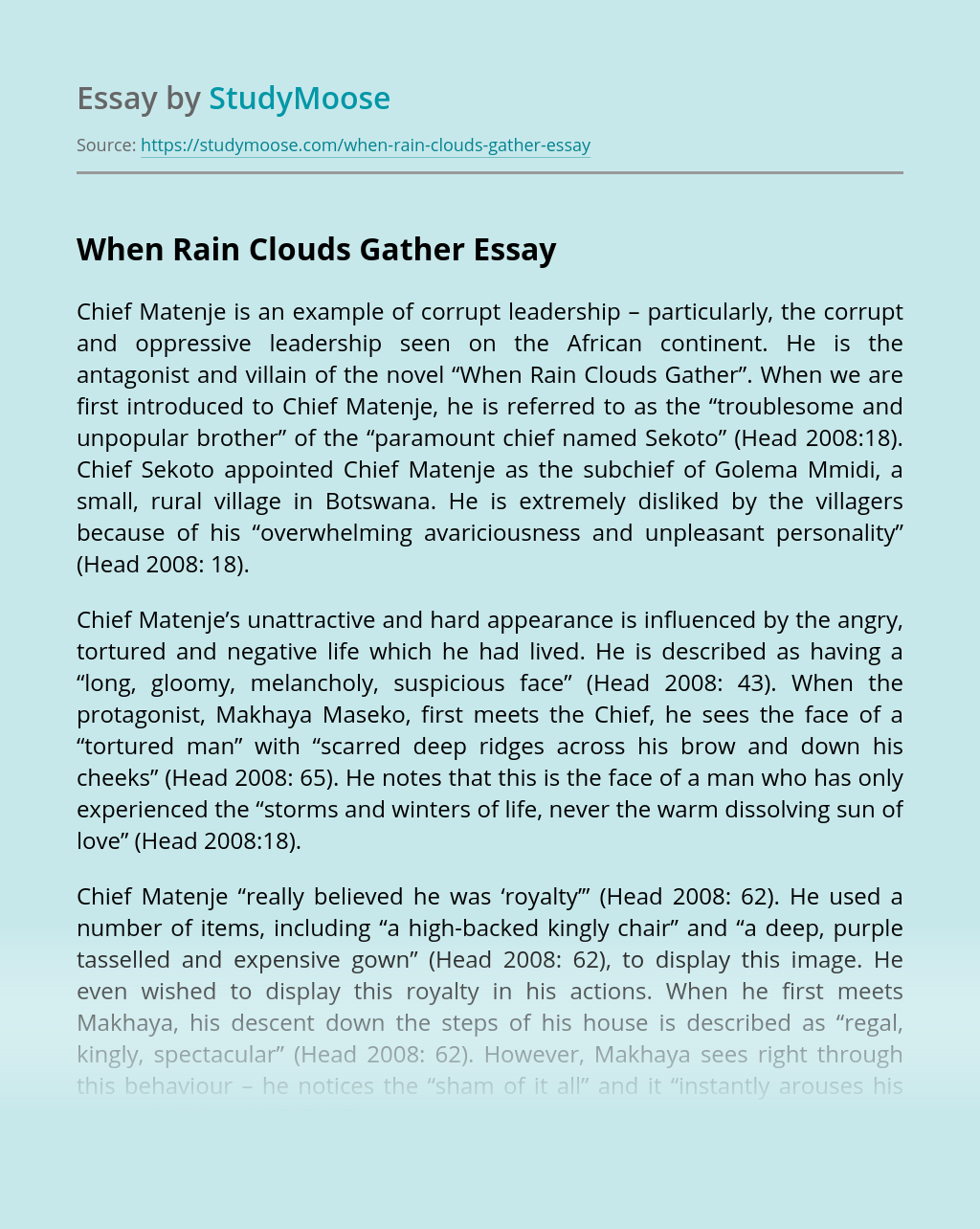