Sleeping deprivation occurs when a person does not get enough sleep. Sleep is very important because you need to get enough sleep so that you can be refreshed for the next day. For a person to get enough sleep and function very well, depends on ages. According to experts, lack of sleep in very harmful to your body and sleep gives our body a chance to overcome tiredness and fatigue.

According to Kathleen Davies (2018), define sleeping deprivation as normally happen when one does not sleep than they need to feel awake and alert.

Don't use plagiarized sources. Get your custom essay on
“ Sleeping Deprivation on College Students ”
Get custom paper
NEW! smart matching with writer

Or the inability to fall

asleep or stay asleep soundly. The general sleep disorder when one does not fall asleep or waking in the middle of the night and being unable to go back to sleep. Sleeping deprivation varies from individual to individuals depending on how little sleep in needed.

Sleeping deprivation is very common but varies across all ages. The percentages of adult getting sleep deprivation is about 35% because they get less than 7 hours sleep during a typical 24-hour day.

Report made by high school student getting sleeping deprivation is about 73% and they get less than 8 hours sleep on school nights. Also, the middle school student gets about 58% sleep deprivation by getting less than 9 hours of sleep. The following sleep pattern has been recommended by the National Sleep Foundation for different age group:

Sleep Deprivation is a condition of having an inadequate amount of sleep.

At least 50% of college students exhibits daytime sleepiness due to sleep deprivation compared to 36% of adolescents and adults. College students, on average get about 6 to 6.9 hours of sleep per night. (Shelley. D.H & Ronald. D.C. 2014)

College students tends to sleep anywhere, at any time for as long as possible. Many of the college student go to bed very late and this behavioural patterns of inadequate lack of sleep turns into a different thing. These lacks of sleep are due to multiple reasons; like physiologic and behavioural activities. Due to the lack of sleep hygienic, student have developed a certain behavioural activity which has affected their circadian rhythm, and this can encourage sleep deprivation. This lack of quality sleep affect or impact their class performance. Majority of students live by themselves and don’t have anyone to tell them how to use their time. In this case, they choose to stay up late socializing and enjoying school life when they should be sleeping.

School activities and class room work can put a lot of pressure on the students where they have to go to sleep very late, because they normally have to sacrifice their sleep-in order to complete their work. Also, the environment in the school and its surrounding can let the students go to sleep very late and this will affect the quality of their sleep. Campus living students often experience loud music and nosy neighbours can make it much harder to get restful sleep

According to (Gilbert & Weaver. 2010), getting enough sleep improves the life styles of students and this is very important. It also helps student to have a good memory consolidation, learning, decision making and to have a critical thinking. A study was also done by Ahrberg and his colleagues (2012), they found out that different types of stress affect the circadian sleep rhythm of the student. This implies a working student can feel stress from going to school and also working hard to get a job done. Students also likes procrastinating their assignment and trying to work through the night by completing their work and Ahrberg and his colleagues concludes that the result of sleeping late is due to the stressor on the student

According to JJ Pilcher & AS Walters (1997), Sleep deprivation can easily affect the performance of college students. Student participate in the Watson Glaser Critical Thinking Appraisal and after 24 hours of sleep deprivation, students were ask to complete questionnaires, one assessing self-reported effort, concentration estimated performance and the other assessing the off-task cognitions. 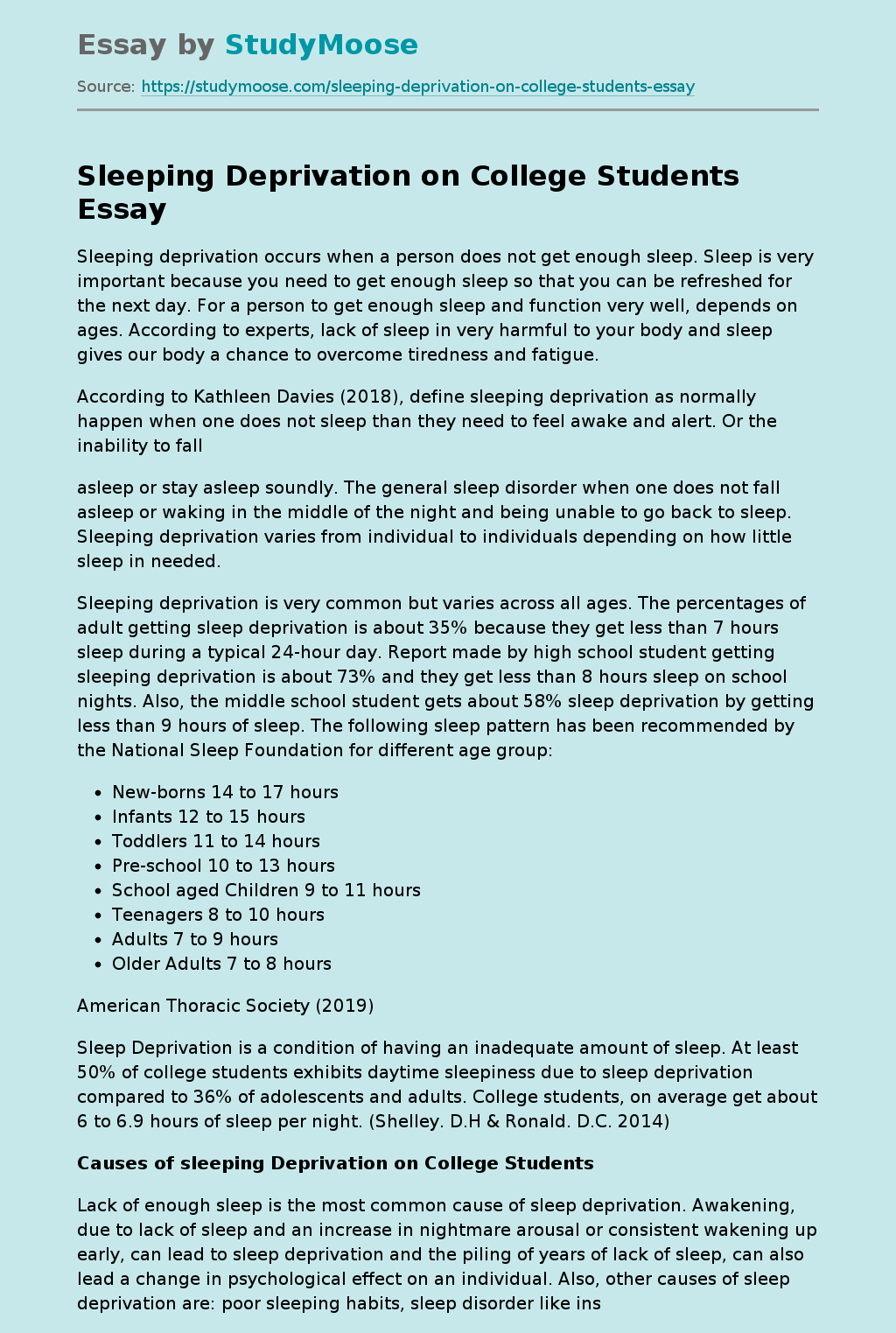