There are three different versions of “Sleeping Beauty” two in which are very scary for a young child to watch or read Sun, Moon, Talia and Briar Rose. Both have dramatic scenes, very troubling to know such a young woman can endure harsh violence and traumatic sexual content. Walt Disney Sleeping beauty has been edited and toned down for the younger audience. All three in tune has the same plot when it comes to the innocent pure young women in a deep sleep/death upon her from a curse when she was just a baby.

Don't use plagiarized sources. Get your custom essay on
“ Innocent Sleeping Beauty ”
Get custom paper
NEW! smart matching with writer

The most interesting part is the outline of each story, a princess or a lord’s daughter who is cursed to endless sleep after pricking her finger. Princess is rescued by a young prince/ king of higher power and wakes up. Each story involves magical being, fairies of some sort. Princess is shown to be a beautiful young girl with the heart of pure love and kindness she accepts all creatures and shows a strength of bravery and courage.

Different cultures appear to have their similarities, but they change characters and locations for the surroundings culture, “Sleeping Beauty” morals stay about the same, but in the earlier times the outlook of the folktale is cruder and meant for “adults”. In the older version, the first story told Talia known as “Sleeping Beauty” gives birth in her sleep to two children one in search of milk suckles Talia finger in the meaning of her breast and pulls out the splinter.

Time has aged, and the story evolved more suitable for children at a younger age.

So, the story of Sleeping Beauty, Sun, Moon, Talia, and Briar Rose, share the same common elements she is cursed with endless death/ sleep, pricks her finger with an object, is laid upon a bed for true love to awake her, and lives happily ever after. Sleeping Beauty is a classic fairy tale it has been told in different ways, the original and twisted versions of Sleeping Beauty have been written in different eras. Each tale holds different versions with violence, sexual abuse, and adultery.

The largest difference in the three stories is the rape in Sun, Moon, Talia where the already married king finds Talia unresponsive and takes her to bed. Smaller differences are the fatal splinter in Sun, Moon, Talia is of a flax. Briar Rose has an Ogress that accepts her death in a pit of vipers, Sleeping Beauty pricks her finger on a spindle of a spinning wheel, Sun, Moon, Talia the Queen herself was thrown into a fire along with her accomplice.

In the earliest versions of fairy tales was made into a single written volume Il Pentamerone. The stories have been passed on from grandmother to mother down to their children. The era of the written stories in the 16th century has been far from clean cut. The original story has included murder, cannibalism, incest, rape and far more despicable acts upon women. In the Grimm’s version, the evil fairy wasn’t invited to the celebration of the born princess because there was no cutlery and crockery.

In 2006 version of the movie played out in a more of a social impact, starting with the children. The modern story of today’s fairy tale allows children to step out of this world to play a role in a fictional world to use their imagination to their fullest. Only one version of the movie was made appropriate for young children which were sleeping beauty for its less violence, and more of a heroism role.

“Sleeping Beauty went through more changes as different people see different angles in the story’s in the 19th-century the Brothers Grimm published their version, Little Briar Rose”, a fairy tale aimed for children and their parents. Grimm’s story retained some of the dark imagery from the sexuality and bawdy humor of the tales since then all the fairy tales have been toned down for the younger age group. The Fairy Tales that are more of this day in age is more appropriate for the young generation. Sleeping Beauty itself has shown to be most appropriate for children in all aspects of the less violence.

The tale was originally written by Charles Perrault. The version collected by the Brothers Grimm was an orally transmitted version of the original literary tale published by Perrault in Histoires ou Contes du temps passé in 1697.[1] This, in turn, was based on Sun, Moon, and Talia by Italian poet Giambattista Basile (published posthumously in 1634), which was in turn based on one or more folk tales. The earliest known version of the story is found in the narrative Perceforest, composed between 1330 and 1344.

In film and television

Sleeping Beauty (1959), a Walt Disney animated film based on both Charles Perrault and the Brother’s Grimm’s versions. 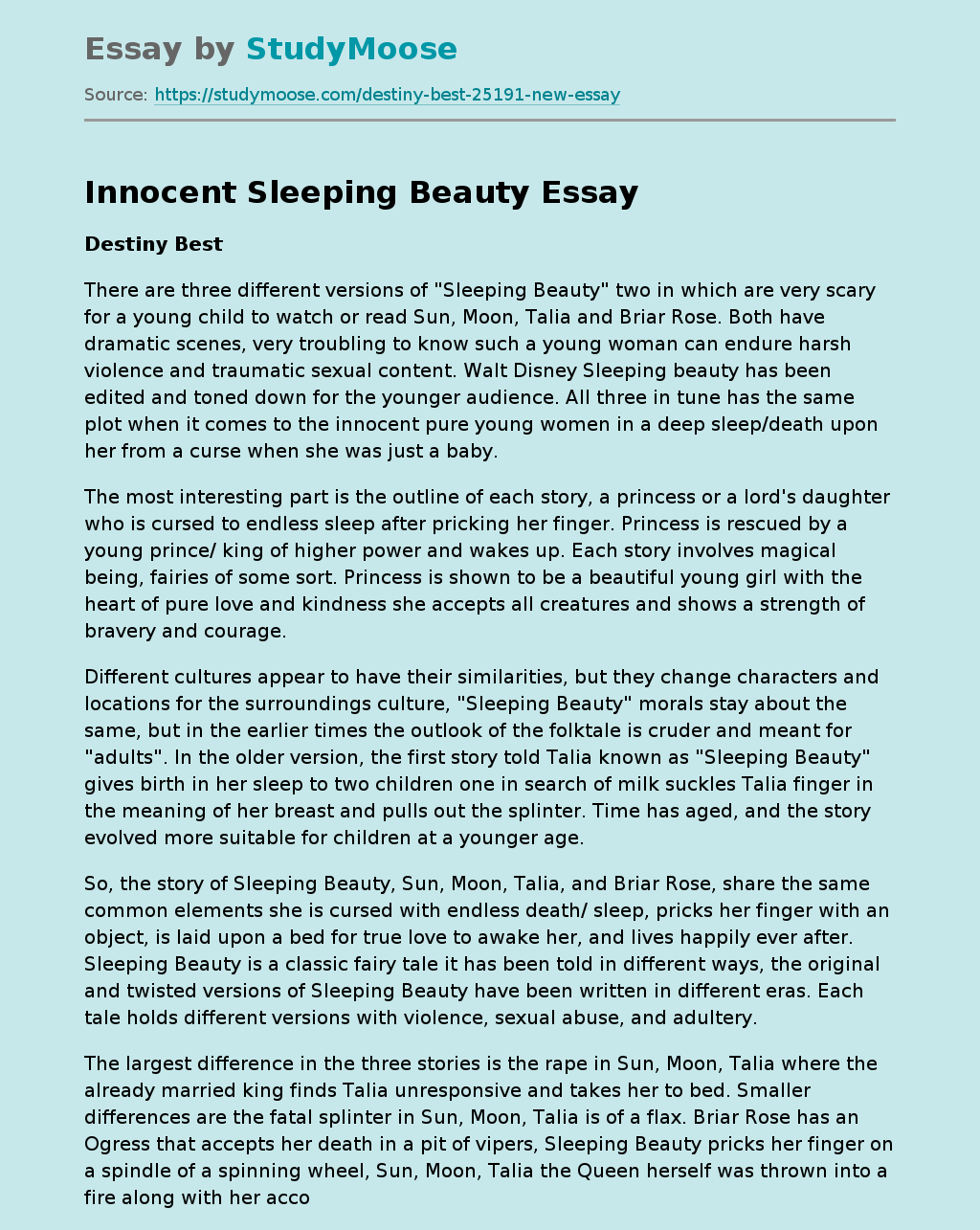