Uncle Tom’s Cabin is a novel about slavery that is based on a middle-aged slave by the name Tom whose unshakable Christian belief led to death. The intention of the author is often assumed to be shunning slavery because it emerges as one of the major themes of the novel. Tom, who is the main character in this novel, is presented as a saintly and dignified slave. The novel is believed to have been Harriet Beecher Stowe’s reaction to fugitive slave laws that were aimed at making the lives of slaves who attempted to run and those who aided them unbearable.

Don't use plagiarized sources. Get your custom essay on
“ Slavery in Novel “Uncle Tom’s Cabin” ”
Get custom paper
NEW! smart matching with writer

The story is believed to have been inspired by a real memoir of a real person by the name Josiah Henson. Among the themes that are covered in the novel is the role of women and is seen in various characters including Emily Shelby, Eliza, Eva, Cassy, and others. This paper discusses the important role that women play in society as depicted in Uncle Tom’s Cabin.

By the time the novel was being written the women’s rights movement had not come to existence. However, the role of women in fighting the vice of slavery is brought to light through various female characters in the novel. The novel tends to depict black women to be more courageous than their male counterparts. For instance, the courageous decision by Eliza to escape was not for her own good but for fear of losing his only remaining child. The things that mothers can do so that they can protect their children have always seen at the time when the safety and wellbeing of their children are threatened, and this is seen in the decision by Eliza to run away after learning that her masters were planning to sell her son.

This is an action that shows that women often show much more courage as compared to men because George, who was Eliza’s husband, did not do anything when it was decided that he was no longer going to work at the factory. His new owner said, ‘You needn’t trouble yourself to talk any longer’ (Stowe 13), and that was it. As much as this would be a temporal or permanent separation from his family, he did not do anything after his request to be taken back to the factory was turned down.

Uncle Tom’s Cabin shows that women have a special way of caring for and protecting the people that they care about than men are able to. Men might be physically strong but are not as strong-willed as women when it comes to the protection of their loved ones and the people that they care about. In this story, there are women who have shown strong will when it comes to protecting their loved ones and the people they wish well for. It is not only the black women in this story who are strong-willed but also the white ones. For instance, Emily Shelby proves that she has humanity and is strong-willed in her by distracting those who were pursuing Eliza. To Emily, Eliza’s happiness seemed to be more important than the money that they would have fetched by selling her. The same cannot be said about George Shelby who was not of the idea that Tom should be sold and only sought to know where Tom was when he was already dying. All he could say was, ‘O, don’t die! It’ll kill me!” (437).

Mothers are also depicted as more passionate patents as compared to fathers in this novel. Mothers in this story, including Eliza seem to be willing to go an extra mile so that they can protect the interests of their children. Prue is even forced into alcoholism after being in a situation of helplessness and letting her child starve to death. In this case, she could not live with her failure as a mother to protect her child. The statement, “you mustn’t tell nobody, Prue, she got drunk agin” (227) is an indication that her alcoholism had become a cause of concern. It is because of her powerlessness that Prue finds herself in a situation whereby all she can do is drink because she cannot bear the pain of having to lose her child in such a way. Cassy’s act of killing her child because she could not bear the pain of seeing another child might be a result of a clouded judgment as a result of the psychological torture that she had been subjected to after having to see two of his sons sold to slavery. Dispute the fact that Cassy’s action would have been extreme, it is agreeably that it was out of passion. This does not mean that the act of killing her third child is recommendable even in the circumstance she was in.

As seen in the novel, “Mrs. Shelby was a woman of high class, both intellectually and morally” (10). This is seen in her actions. The fact that Emily Shelby was willing to stand for the slaves and convince her husband not to sell them is an implication of the role that women can play in defending the interests of other people, especially those who lack the ability to talk for themselves. The fact that she cites the relationships that they had developed with the slaves is an indication that she considered them more than just their belonging. If Emily’s behaviors should be taken as just an example, then it can be argued that women often play the role of a moral campus in situations whereby men are more likely to base their decisions of logic like in the case of Shelby. The role of women as moral compasses in society is affirmed by Eva’s final wish, which was that all her father’s slaves be released. It is only St. Clare’s who seems to be different from the other women in the novel because she refuses to fulfill the promise that St. Clare had made to release his slaves. 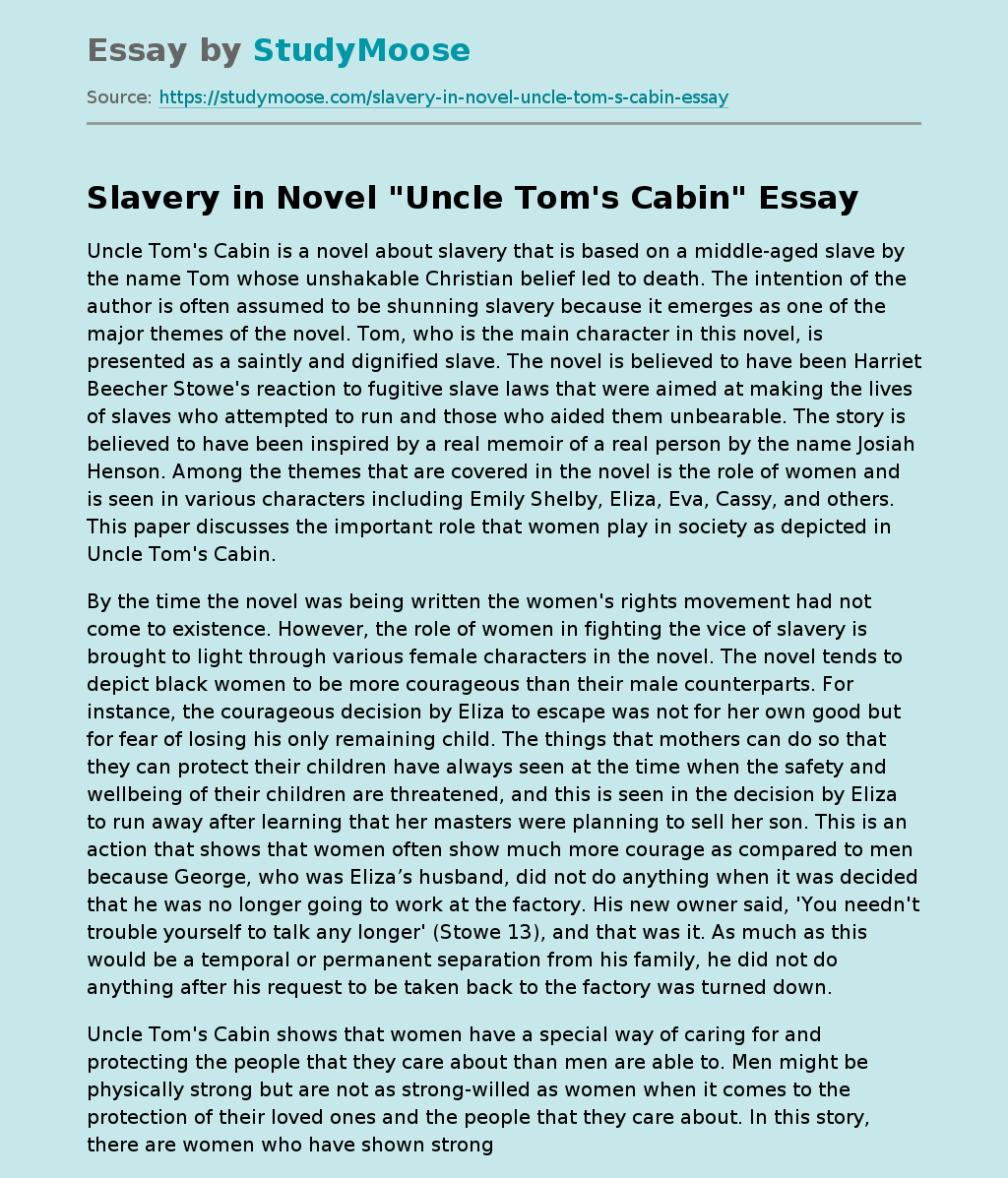