Don't use plagiarized sources. Get your custom essay on
“ Richard Frethorne’s Personal Experience of Slavery ”
Get custom paper
NEW! smart matching with writer

Frethorne was one of these poor persons who accepted to become an indentured servant, not knowing that everything that they were promised was not going to be fulfilled. Frethorne left England in 1623 and Jamestown, Virginia was his predetermined location. Frethorne’s life before servitude is quite vague, for there is not much record of his lifespan.

However we are able to decipher that he has his two parents alive (mother and father) and he has siblings (both female and male).

Based on the letter he sent back to his parents, Frethorne portrays the hardship of indentured servants in early 17th century Virginia. In his letter, Frethorne implores his parents for help. He is aware of the conditions in which he is exposed to living and he feels that the end is near for him. The letter serves as a cry for help as well as a goodbye letter if his death were to come. Frethorne compares his life now and the life he had back in England; in England he ate more in one day than he ate in one week in the ship; his parents have more to a beggar in England than what he had now.

In truth, even though poor whites suffered in England because of their poverty, being an indentured servant was worse than poverty.

Two issues that have come to surface regarding Frethorne’s letter to his parents are: complains about the unfulfilled promises made by elite Englanders to indentured servants and the second issue is regarding indentured servants being considered workers or slaves. The elites promised indentured servants three meals a day and upon their completion of servitude they were to be given coat, shirt, pants, shoes, and land; however, Frethorne’s letter depicts the complete opposite. Servants were not given three meals a day, they were barely given a good stable meal, and most of the food and water given to them made the passengers sick. Gottlieb Mittelberger described the conditions in which the passengers lived: they only had a 6×2 space, ships carried around 600 persons, passengers were forced to waste their last bit of provisions and money in order to stay alive, they were starved to death, trips were weeks long, and the salty food and blackened water made them sick.

In the early 17th century, more than two thirds of English settler came to the America’s as indentured servants. This was the only way that these poor English people could come to America and start a new life. But soon enough, these white indentured servants began to get tired of the backbreaking work they had to do, so masters now relied on African slaves to do the job. Both indentured servants and slaves were treated very similarly. Slaves and servants were both brought to North America in very narrow spaces, they were starved to death, exploited and lied to, and above all they were abused! Frethorne’s letter to his parents exposes the true intentions behind the elites. Not only did they exploit these poor people due to their economic status but they also deceive them by stating that they will receive certain things after their service is completed, however they are unfulfilled promises.

Indentured servitude is not a subject I have learned a lot about, but what I do know is that they were treated quite similarly to slaves. Regardless of their color, white indentured servants were still treated as inferior as slaves; their poverty made them subordinate to elites and therefore is made these poor white folks more susceptible to the cruel intentions of the “rich”. In this class I have learned that indentured servitude was completed by white poor people, but after time Indians and Africans became the new indentured slaves. After these white indentured servants completed the allotted time, they were then free to go and most of them became what was known as the middle working class in the 17th century.

I was also exposed to the horrific experiences these indentured servants had to undergo while on their trip to North America. Even though they were white, they were treated as inferiors and no mercy was taken upon them. Children suffered the most, families were turned against each other, rancor existed in all corners of the ship, and the majority died on board and were thrown to the sea without a proper burial or ceremony. Frethorne’s letter unsealed a new perspective I had not even taken into consideration.

These elites were ruthless and had no pity on anyone lower in rank than them. They stepped over all the inferiors in order to get what they wanted at any expense. Indentured servitude was almost alike to slavery and I believe that the only difference was those white indentured servants were promised freedom upon completion and that freedom were actually given. Through Frethorne’s letter, I have felt the pain these poor have experienced and I have felt the pain my people had to go through. We, till this day, are still considered inferiors and subordinate to whites, yet it is in our power to change that. 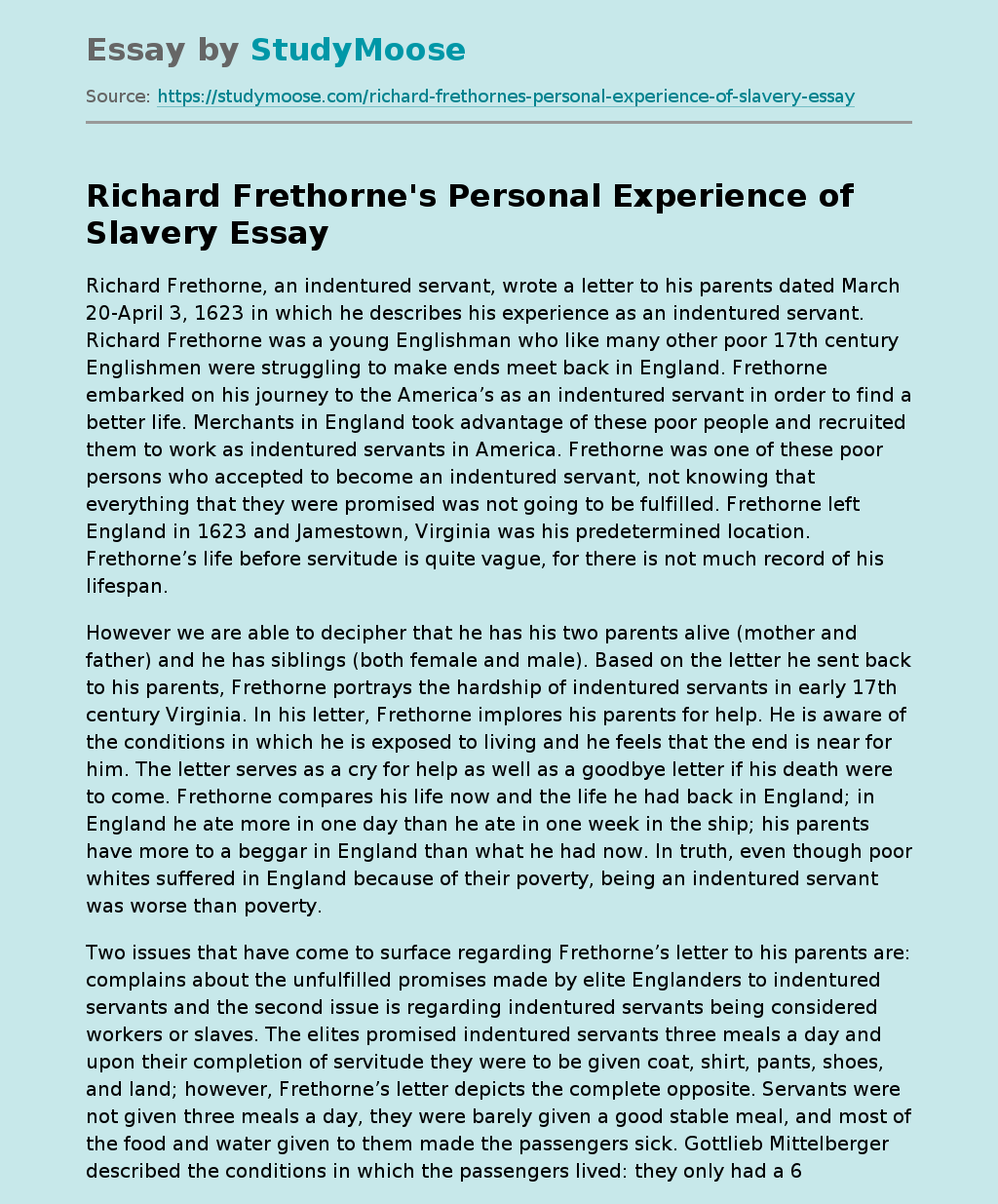