Should Governments Spend Money on Art, When They Have so Many Other Important Issues and Concerns?

Art has never lost its unique power to attract people and transport them to a different world. It is argued that government has the responsibility to financially support art though they have so many other important items to invest money in , which I totally agree with.

Evidences shows that arts can bring great benefits to individuals as well as the whole society. First of all, arts, such as music, painting and poems, always nourishes the human civilization. It is an effective approach to alleviating one’s stress and shaking off the shadow.

Don't use plagiarized sources.
Get Your Custom Essay on Should Governments Spend Money on Art, When They Have so Many Other Important Issues and Concerns? Just from $13,9/Page

Let’s take music ,one form of arts for example.A recently study announced to the public finds that music therapy helps more than 70% of earthquake victims in Sichuan overcome adversity and enter upon the reconstruction of their homeland. As far as I am concerned, the development of art serves well for the people, the government and the public, because it calms the angry men down and makes everything done fairer and softly, contributing to the harmony of society.

In addition, art is the main medium of culture. Art bridges the culture gap between different countries or religions. Take the art of Erhu of China as an example, in 1980s when Erhu first appeared on the international stage, this traditional Chinese instrument electrified the audience .Ever since that, western countries have started to learn about the Chinese culture through this art. Hence, the government’s support of art will help disseminate cultures and promote commerce with other countries.Therefore, I believe that government has the necessity and obligations to invest money on art.

Admittedly, government’s responsibility is not restricted to issue of arts. Obviously, government’s investment on art will add to the its financial burden, and may be time-consuming as well. It is known to all that the government has to address the problems of pollution, crimes, employment, etc. Hence too much money distributed to art would break the balance of society and disfunction the government’s duty. Even so, it is still worthwhile for government to spare some money for arts.

Should Governments Spend Money on Art, When They Have so Many Other Important Issues and Concerns?. (2016, Mar 24). Retrieved from https://studymoose.com/should-governments-spend-money-on-art-when-they-have-so-many-other-important-issues-and-concerns-essay 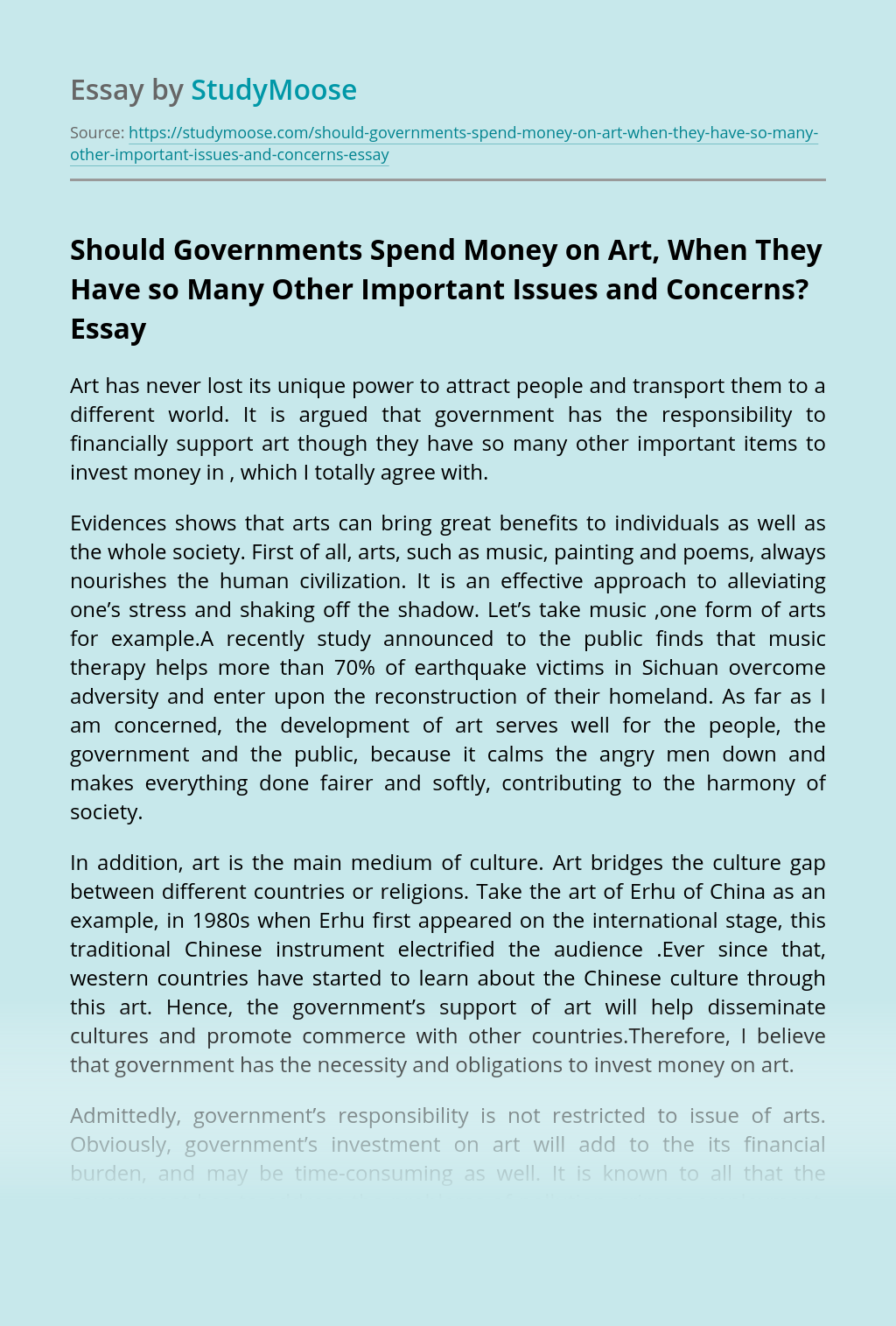 For the past 17 months, shown on every television news channel across the United States. The case of George Zimmerman, and the shooting death of 17-year-old Trayvon Martin. Like every year, the media will take a case and publicly turn the story into a circus. The rebuttal article for this paper is a story written...

“Art for Heart’s Sake” is a short story written by Reuben Lucius “Rube” Goldberg, an American cartoonist, sculptor, author, engineer, and inventor, who lived between 1883 and 1970. He is best known as a cartoonist and a founding member of America’s National Cartoonists Society. Collins P. Ellsworth is a wealthy 76-year-old businessman who is being treated for a form of compulsive buying disorder, otherwise known as oniomania. His uncontrollable buying habits—he...

Plutonium and internet start-up company which was founded at the beginning of the technology boom was developing the technological systems necessary to support the rapidly expanding user base. Plutonium purchased an expensive and complex billing system to automate the billing of internet accounts using a credit card to integrate its system. Jonathan, the manager of...

Arthur Birling is a self-centred man intent on climbing the class ladder, even at the expense of his family and employees. He regularly uses his obsessive behaviour over status to invoke popularity or power within a particular crowd, which is evident in the very first scenes of the play when Birling says to Gerald: ‘It’s...