Should animal testing be banned?

Should animal testing be banned? This question has always been highly debated and has periodically been in the headlines of tabloid newspapers due to its controversial nature. In this essay, I will highlight both sides of the argument giving equal weight to each, in an attempt to address some of the issues arising from this topical subject.

Those who disagree with animal testing claim that it is harmful, cruel and scientifically lacking practice. They also claim that the benefits are often misconstrued.

Don't use plagiarized sources. Get your custom essay on
“ Should animal testing be banned? ”
Get custom paper
NEW! smart matching with writer

In animal testing, countless animals are experimented on and then killed after their use. Others are injured and will still live the remainder of their lives in captivity. The unfortunate aspect is that many of these animals received tests for substances that will never actually see approval or public consumption and use. It is this aspect of animal testing that many view as a major negative against the practice. As it suggests that animals die in vain because often no direct benefit to humans occurred from animal testing.

Those against animal testing believe that alternative such as cellular or computer models are sufficient enough to replace animal models.

On the other hand, some people believe that every day thousands of people are saved from painful diseases and death by powerful medical drugs and treatments. They state, “This incredible gift of medical would not be possible without animal testing.” According to a lot of the scientific community, and lots of universities where testing goes on, animal experimentation is necessary to help human beings.

Some of the greatest scientific advances of all time are thanks to animal experimentation. Researchers argue that the things that humans and animals have in common make them invaluable test subjects. Untested products released on the market have led to the injury and death of humans in the past.

Some people stated that animal testing also essential for scientific inquiry and for pushing forward medical research and methods. Also the benefits to mankind from research on animals have been great, vaccines for chicken pox, cholera, influenza, measles, mumps, polio, Whooping Cough, TB and various other cures for diseases that were once life threatening were developed through testing on animals. Other medications, including insulin, penicillin, painkillers and chemotherapy, as well as medical devices such as pacemakers, artificial hearts and valves and artificial hips and knees, were also made possible by medical research involving animals.

One of the most famous examples when it comes to the dangers of animal experimentation would have to be the Thalidomide tragedy of the 60’s and 70’s. Thalidomide was a drug that came from the German market and was previously considered to be safe after it had been tested on thousands and thousands of animals. It was then marketed as a “wonder drug,” an amazing sedative for breastfeeding or pregnant mothers and it supposedly, “could cause no harm to either the mother or the child.”

Despite this, apparent ‘safety testing’, tens of thousands of children whose mothers had used this drug were born with severe deformities. This drug was slowly taken off the market and thousands of pounds were paid out in compensation, however, in many other countries the drug continued to be used because of the high profits made from its sale and the demand that it stimulated. The idea that it had been first tested on animals with no reported side effects was a safe guard that some say should not have been, and still should not be, relied upon.

Some for animal testing, cite the suffering and loss of life of animals to be “worth it” when the loss of life or with the reduction of human suffering is involved. The argument is a fundamental conflict of values that humans are superior, more intelligent and ultimately more important than anything else on the planet, and that animals have no rights in comparison to human rights. At this time, scientists don’t believe that alternatives to animal testing are sufficient to be replaced in all cases.

In Conclusion, many people argue that it is immoral to test products of any kind on animals, while scientists believe that animal testing and experimentation is just about the only way they can discover many medical or other unique breakthroughs.

I accept that Scientists typically have used animals for testing purposes because they are considered similar to humans and that in the past animal testing might have been the only possible method. I also acknowledge through the use of animal testing there has been great benefits, but I must also recognise the great mistakes to both humans and animals. Therefore, I feel that in today’s society where technology is so advanced alternatives must be sought. That money should be spent on developing other methods of testing drugs and medical procedures, so that the use of animals can be phased out altogether.

Should animal testing be banned?. (2016, Oct 03). Retrieved from https://studymoose.com/should-animal-testing-be-banned-essay 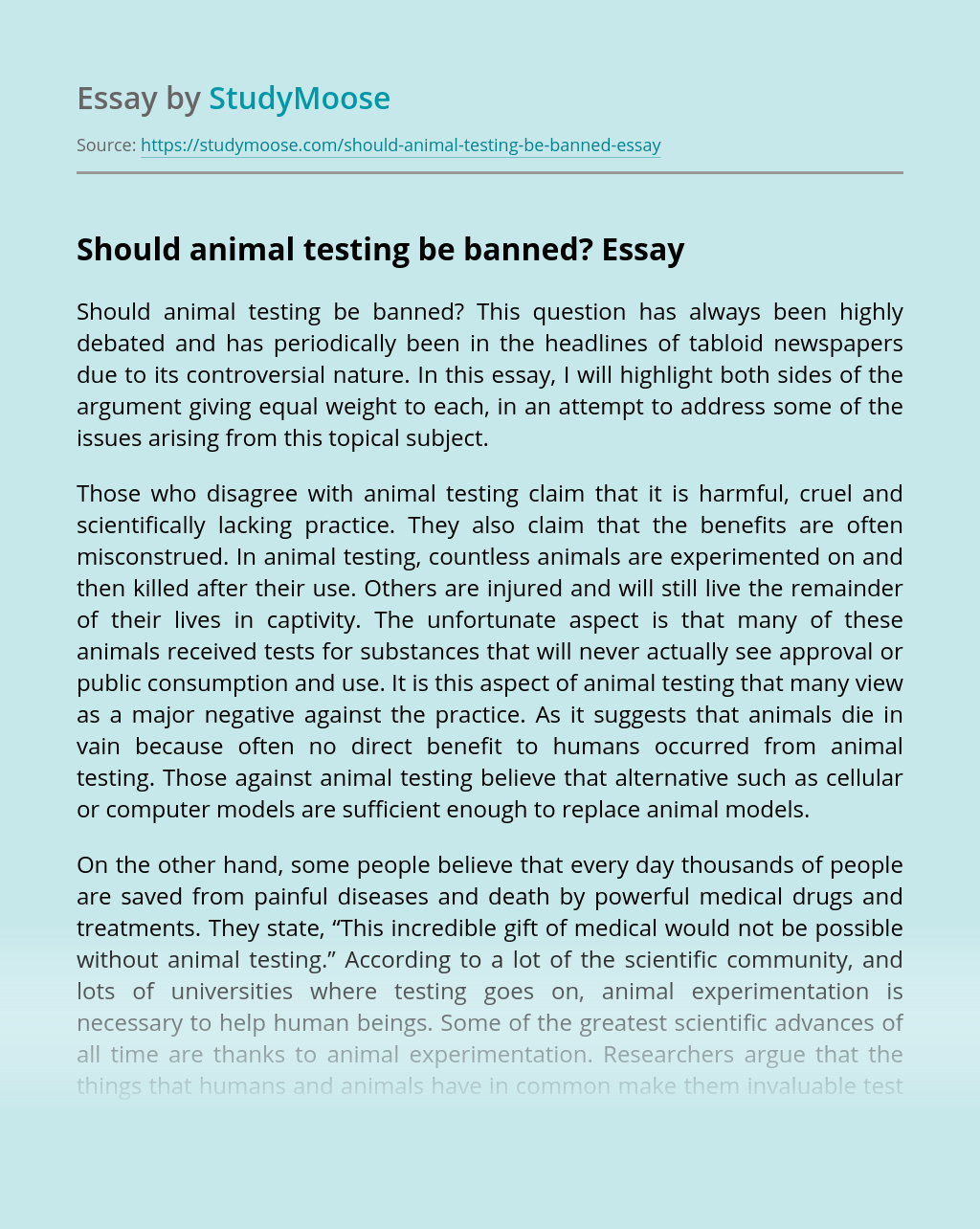