Should animal hunting be banned

Should Animal Hunting Be Banned? I personally think animal hunting should be banned because hunters are one of the main reasons why animals suffer, are extinct, and are endangered. Because of hunting animals are becoming extinct, and with arsenal of rifles, shotguns, muzzle loaders, handguns, bows and arrows, hunters kill more than 200 million animals yearly. It Is Cruel; Animals deserve just us much respect as we do. There are primates that are the closest living animal to us and we hunt them.

Don't use plagiarized sources. Get your custom essay on
“ Should animal hunting be banned ”
Get custom paper
NEW! smart matching with writer

People do it for no reason but animals do it because the defend the try to fend us of and defend themselves. I have for animals and will never try to kill an animal. It is cruel and unnecessary; hunting animals is absolutely horrible as animals feel the pain of a gunshot the same way we do. Humans can live on other things, which give you more protein than meat for example, quorn. This gives you more protein and stops pain going through all these poor innocent animals that have not done a thing to you.

In addition, I can’t believe my eyes seeing hunters and poaches STILL killing endangered animals. What do you want? Money? Fame? A fur coat? Why do you do this? There’s no need for this behavior and when all of these beautiful, stunning creatures like tigers become extinct everyone will be blaming it on you. And it annoys me how people keep saying ‘we do it to keep control of the population’ well our population of humans is over limit, and you don’t see the animals hunting us, do you?

Our planet is turning into a polluted piece of litter because all the people don’t seem to care about what the best things in life are and are turning it into a dark place without nature and animals.

There has already been many extinct species because of these matters, and I cry myself to sleep every night from all of this and I know I can’t do anything as I’m ‘just a little girl’ said from some people. No one listens to my opinion on anything and I know I’m nothing in this world and I can’t make a difference.

Stop killing animals for fun; Animals have feelings just like humans animals like giraffes elephants rhinos and gorillas should not be killed for fun and for money and ivory animals are becoming more and more endangered like some giraffes and elephants of course we have to eat meat just sometimes for our protein but there are other things to eat in life that is healthier and it helps not kill animals as much so lets stop poaching and killing animals for fun money and ivory/decorations and remember animals have feelings just like humans do.

It is simply wrong; Animals know pain and fear. Simply approach any wild creature and most will turn and run or prepare for a battle. Humans have the capacity to empathize. If you are capable of empathy and still choose to stalk and kill an animal you are not functioning to your capacity. Further, it is not unusual for hunters to shoot an animal but not kill it. The animal escapes to die a slow painful death or live with a lifelong injury. What gives us the right? Yes we need to hunt to survive, and have a healthy iron intake. But why do people hunt for fun e. g. sport?

In the world we live in today, there are many sports (some may say too many), that we find entertaining. If youre looking to play a sport, there are tons to choose from. Many of these make people become a lot more healthy rather than just aiming at beautiful animals and pulling a trigger. What gives people the right to kill innocent animals that God created? Even though human beings were given an unfair advantage over all living creatures, does not mean we have rights to harm anyone or anything! A poor helpless animal, doing its daily routine, minding its own business gets shot.

I’m sure this animal never desired to kill you even though you desired to kill it. Please stop hunting for sport! How Many Animals Are Killed Each Year? More than 100 million animals are killed by hunters each year. This does not include animals killed in the agriculture industry. More than 40 million of these animals are killed for their fur alone. Do humans need meat? You don’t need meat. The most unbiased information out there is the millions of people who abstain from it and are in excellent physical condition.

Humans do need a variety of nutrients: proteins, carbs, fats, vitamins, minerals, water, fiber, and a long list of micro nutrients… but that doesn’t mean they must come from any certain foods. There are plenty of ways to get the nutrients found in meat without eating meat, or eating fake food, or popping pills. It is a fact that humans need protein and other nutrients that are indeed found in meat, but where people get all their nutritional requirements is irrelevant as long as there’s a healthy variety and they ARE getting them, so they do not need to get them from meat.

If vegetarians are careful to eat well they are perfectly healthy, as are people who eat meat In around 300 years time, 75% of all mammal species will have disappeared from this planet. That’s the startling prediction from Anthony Barnosky, a palaeobiologist at the University of California, Berkeley – that’s if the current rates of extinction continue and the animals already threatened or endangered are wiped out this century.

It has been estimated that over 99% of all species that have ever lived are now extinct. Of course, there is also a remarkable record of persistence. Life has persisted since it originated on earth some 3. 2-3. 7 billion years ago. The descendants of the first land vertebrates that appeared on land some 400 million years ago are still around, and we are one of them, along with all the living amphibians, reptiles, mammals and birds.

Some groups are less fortunate, and there are no living descendants, for example, 100% the dinosaurs (notwithstanding of the kooks who claim that birds are living dinosaurs or descendants of dinosaurs), the ammonites, many of the Cambrian arthropods detailed in Stephen Jay Gould’s book “Wonder Life. ” Also gone are the enigmatic Vendian or Ediacaran fauna, which still puzzles scientists to this day as to what they were. Some scientists even suggested they were plants.

Should animal hunting be banned. (2017, May 19). Retrieved from http://studymoose.com/should-animal-hunting-be-banned-essay 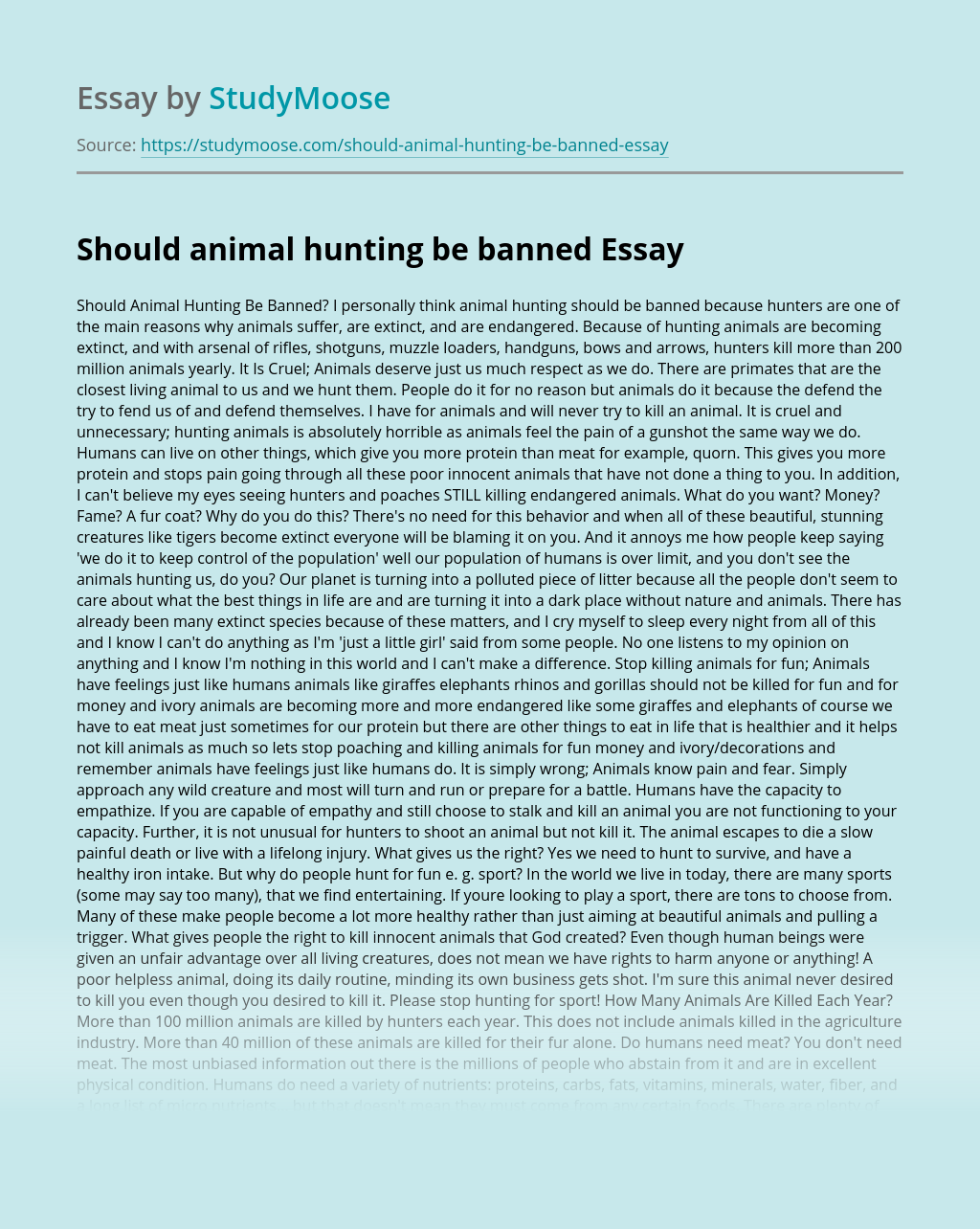