Why Sport Hunting Should Be Banned?

Hunting can be defined as the practice of trapping or killing animals. These animals are pursued otherwise, or the hunters track them with the same ideas. The hunting of wildlife and untamed animals is done by humans for sport, food, trade, and to have as pets or get rid of them that are dangerous to humans. But as years passed by, humans are hunting excessively and without remorse. Therefore, in my opinion, hunting should be banned permanently because it is causing a strain on the animal population, in the interim the extinction of animals.

Don't use plagiarized sources. Get your custom essay on
“ Why Sport Hunting Should Be Banned? ”
Get custom paper
NEW! smart matching with writer

Hunters claim that the only way to maintain control of the local wildlife population is to kill as many animals as possible. Some argued that animals cause damage to property and are adaptable, moving into people’s homes causing havoc, searching for food and security. But the reason why animals go into people’s property is that their homes are being invaded as well. It is established, that humans are grading down the forest to construct houses, the animal’s habitat does not have enough food due to bush fires, natural disasters or they are running away from predators.

Hunters need to be educated that the loss of habitat can cause the extinction of species and a decrease in biodiversity. Expectant animal mothers would seek refuge in a human’s home to deliver her offspring because she would think it is safe to do so. Our very own national bird the Scarlet Ibis of the Caroni Bird Sanctuary continues to face the threat of poaching and habitat destruction as well as extinction.

Cruelty towards animals also disrupts migration and destroys families. For example, the Red Howler monkey (Aloutta Macconnelli), is part of a complex social structure and forms strong bonds with its family members. A baby howler becomes very attached to its mother as she provides the necessary care, protection, and attention it needs in order to grow and develop. This bond between mother and baby howler is compared to that of a human mother and her baby. Recently, someone found a baby howler monkey, the animal was frightened and fearful of human interactions, it was taken to the Emperor Valley Zoo (EVZ). The calls it made trying to locate its mother was very heart-breaking to hear, (I have one). (Khan, 2018.). Everybody loves a cute baby howler monkey, but do they know how it is retrieved from the wild? It is well established that a baby can only be taken if the rest of the family is slaughtered (usually consisting of eight to twelve adults), a very usual and hapless habit in our country. The Honourable Clarence Rambharat has designated the Red Howler monkey as an ESS due to the ghoulish findings that went viral on social media about the remains of two Howler Monkeys found in Mayaro. This heart-breaking act was shared by a Conservation Group known as Papa Bois Conservation and Doniel Gibson a group that supports the ban of wildlife hunting in Trinidad and Tobago.

One can say that hunting is an activity that hunters find rewarding. But if they continue to hunt excessively, they will put a strain on the animal population, in the interim causing extinction. Some humans do not appreciate nature but destroy it for their own selfish acts. The reality of it, what animals will they leave for our future generations to know about? Only pictures will be available to illustrate extinct animals, therefore children will be robbed of real-life animal experiences. They would not know what a Scarlet Ibis or Red Howler monkey looked like. Many support the ban on wildlife hunting because of their passion for animals and seeing how they are ill-treated breaks their hearts. It is firmly believed that the human mindset is not geared towards respecting wildlife animals.

Why Sport Hunting Should Be Banned?. (2020, Oct 14). Retrieved from http://studymoose.com/why-sport-hunting-should-be-banned-essay 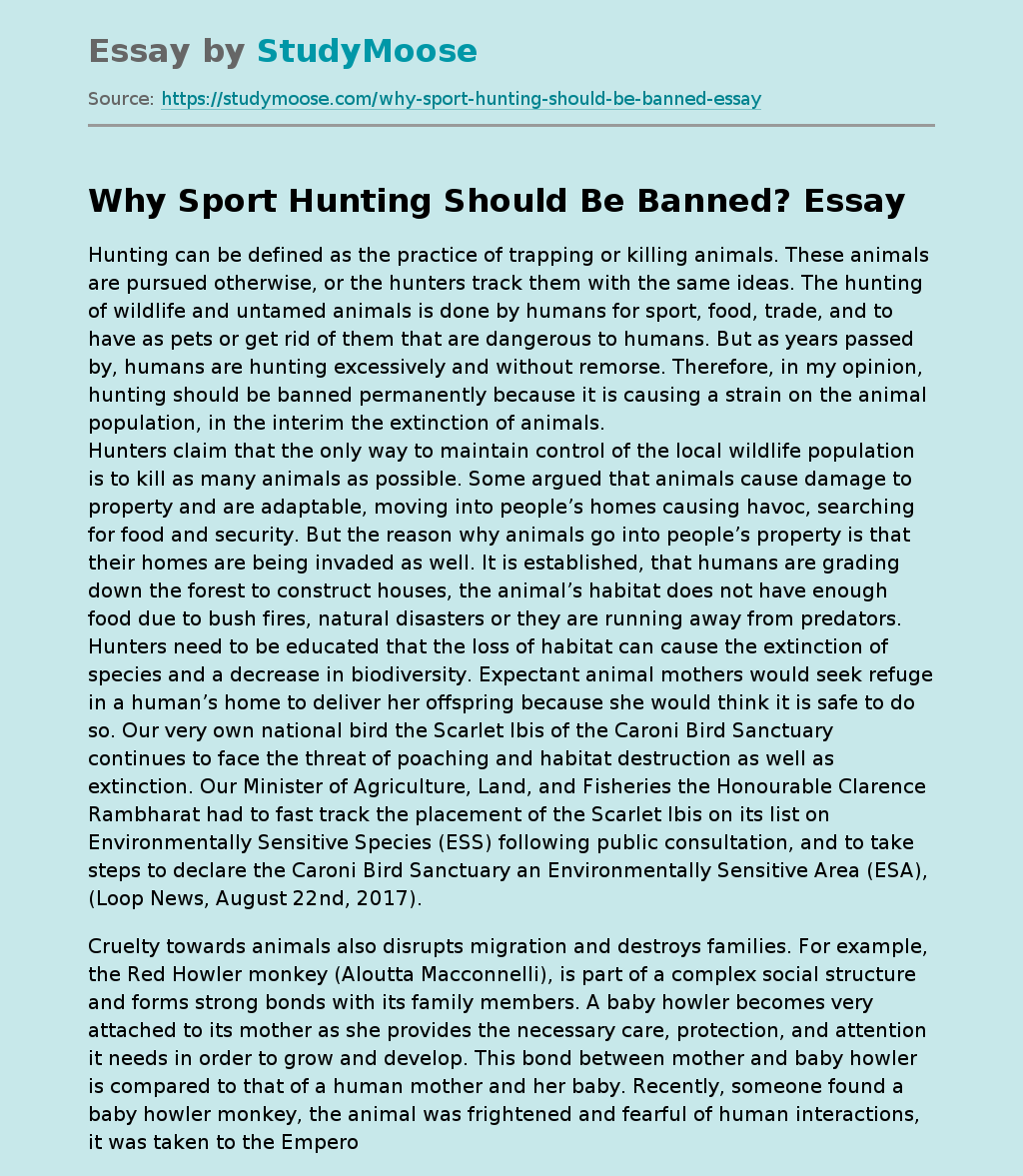