Should Abortion be Legal or Not

The moral lesson on abortion has always frowned on taking human life without consent. However, in some complex situations, this abhorred practice is allowed and made valid. For example, events, where pregnancy is life-threatening, was contracted from rape, or incest could be some of the reasons why abortion may be resorted to. Therefore, the moral argument on abortion is a relevant subject of interest as it remains a controversial issue to debate about. As such, the stance of the law on abortion is important to help settle cases and to spell out terms and conditions that may apply.

Don't use plagiarized sources. Get your custom essay on
“ Should Abortion be Legal or Not ”
Get custom paper
NEW! smart matching with writer

Human beings are expected to behave in a certain way to conform to a standard of morality in society. Aquinas claims that laws which conflict with the requirements of Natural law lose their power to bind morally. Plato, Cicero, and Aristotle shared the same sentiments. He expressed that if a ruler enacts unjust laws their subjects are not obliged to obey them except in certain special cases when it is a matter of avoiding ‘’scandal’’ or civil disorder.

Plato also came up with the concept of Justice where he proposed that only laws that pursue the ideal of justice can be considered right. The principles of Natural law are pro-life and pro-choice. The pro-life rule is the law of self-preservation which is about the existence of beings or the right to life of humans. Everybody deserves to live, therefore one cannot take the life of another intentionally.

For the people of Ghana, for instance, our history does not support abortion no matter the situation so if there is a law that will bring abortion, it will not be a good law and in that case, it will degrade the moral structure. The second rule which is pro-choice was being explained as a decision taken by the woman whether to terminate the pregnancy or not. The woman has a right over her own body and she decides what to do with her body because the fetus lives within her body and she has absolute control to give birth or to end the pregnancy as in the case of ROE V WADE [1973].

According to the legal positivists, they believe that law is the law when it is stated or written. John Austin believes that positive laws are backed by Sanctions and in our Ghanaian criminal law if it is not written, you cannot sanction the person on it.

To conclude, considering the effects of rape which is very grave on the victim, it would not affect the moral argument since a blend of all the theories will make the law better and this is even allowed in the laws of Ghana because of the post-traumatic stress disorders that make the victim feel terrified with low self-confidence leading to suicide and the effect it may have on her sexual life.

Should Abortion be Legal or Not. (2021, Jun 26). Retrieved from http://studymoose.com/should-abortion-be-legal-or-not-essay 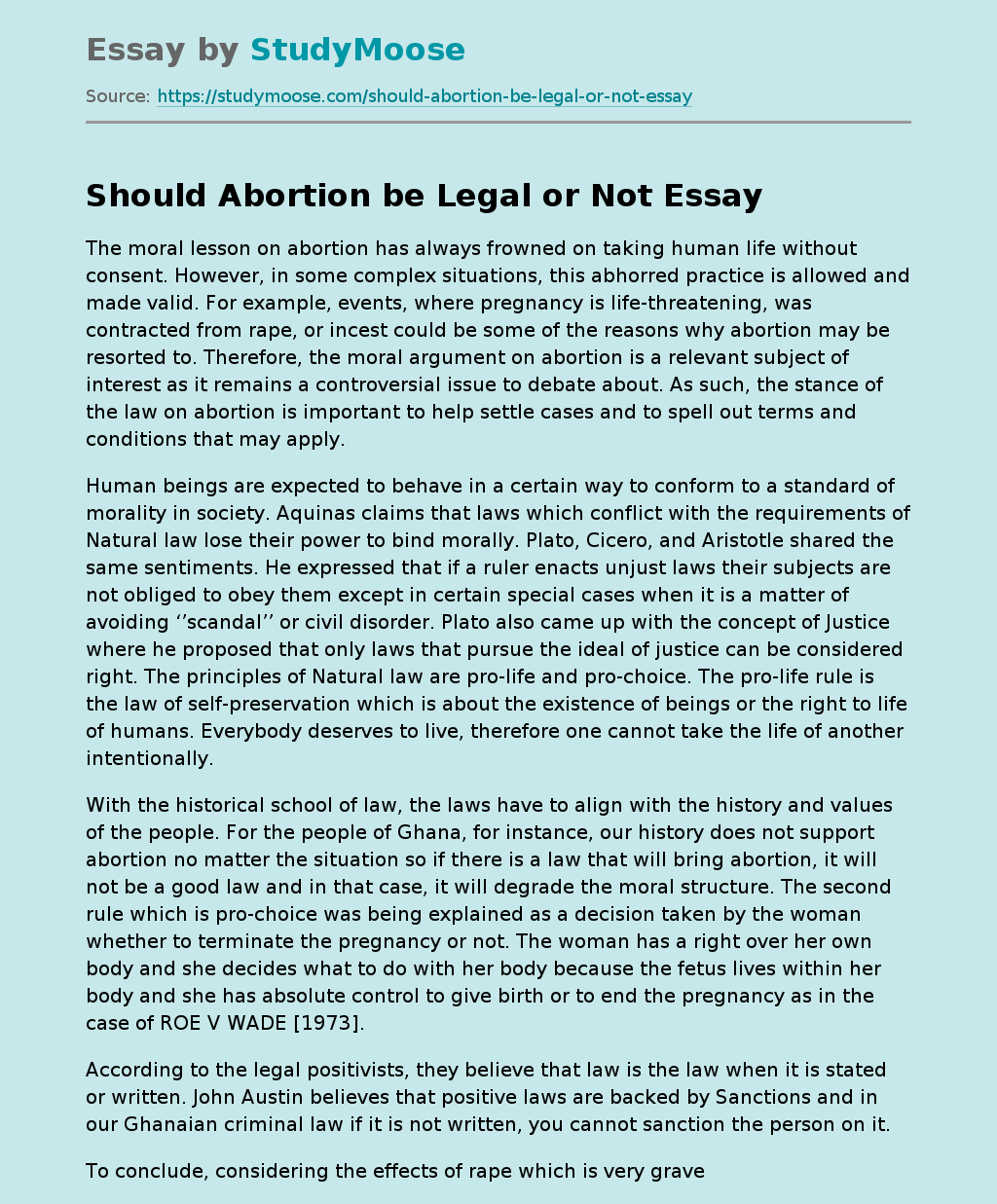