The Big Bang theory is today’s dominant scientific theory about the origin of the universe. It states that the universe was created from an infinitely hot and dense subatomic ball, which once exploded not only created energy and matter, but space and time itself. This is estimated to have happened around 14 billion years ago. 300,000 years after the big bang took place the plasma of elementary particles had cooled to 3000K, during which atoms began to form as electrons came into orbit around protons and neutrons.

Don't use plagiarized sources. Get your custom essay on
“ Short Summary Essay on the Big Bang ”
Get custom paper
NEW! smart matching with writer

It was at this point the universe also become more and more transparent, as previously the photons that had been created were exchanging energy with the fundamental particles. This could no longer take place so easily with atoms so the photons filled interstellar space in the form of almost a ‘gas’. Over a period of 10 billion years this matter and energy coagulated into stars, galaxies and planets and continued to expand, forming what we now know as the universe.

The big bang theory was initially suggested by Georges Lemaitre in 1927. His proposal came after comparing a model of the universe based on Einstein’s theories with observations of light from distant nebulae being ‘red shifted’. This is due to the Doppler effect, when there is a change of frequency or wavelength of a wave from a source, when wave and source are in relative motion. In this case when comparing emission spectrums, the light emitted from the atoms in distant stars has been shifted ever so slightly to the red end of the spectrum, in comparison with light from our sun.

This suggests that the distant star is moving away from us as red light has a larger wavelength. The diagram below is a spectral comparison of light from our sun and light from the distant __________.

But it was Edward Hubble in 1929 that gathered enough evidence to justify Lemaire’s theory. Hubble observed that distant galaxies in every direction are going away from the earth at speeds proportional to their distance.

The big bang theory also predicted the existence of cosmic background radiation (the radiation left over from the explosion itself). This radiation was observed in 1964 by Arno Penzias and Robert Wilson, providing further evidence that the Big Bang took place. The cosmic microwave background has the biggest cosmological red-shift known. It is due to the interstellar ‘gas’ that I mentioned earlier, in which after 14 billion years the photons have stretched slightly due to the expansion of the universe.

In recent years the Big Bang theory has faced some critism as problems have arisen which question the validity of the theory. Examples of these are the fact that the theory contradicts the law of conservation of angular momentum (in the form of retrograde motion of planets, moons etc), and the fact that it has been discovered that matter is not spread evenly throughout the universe. 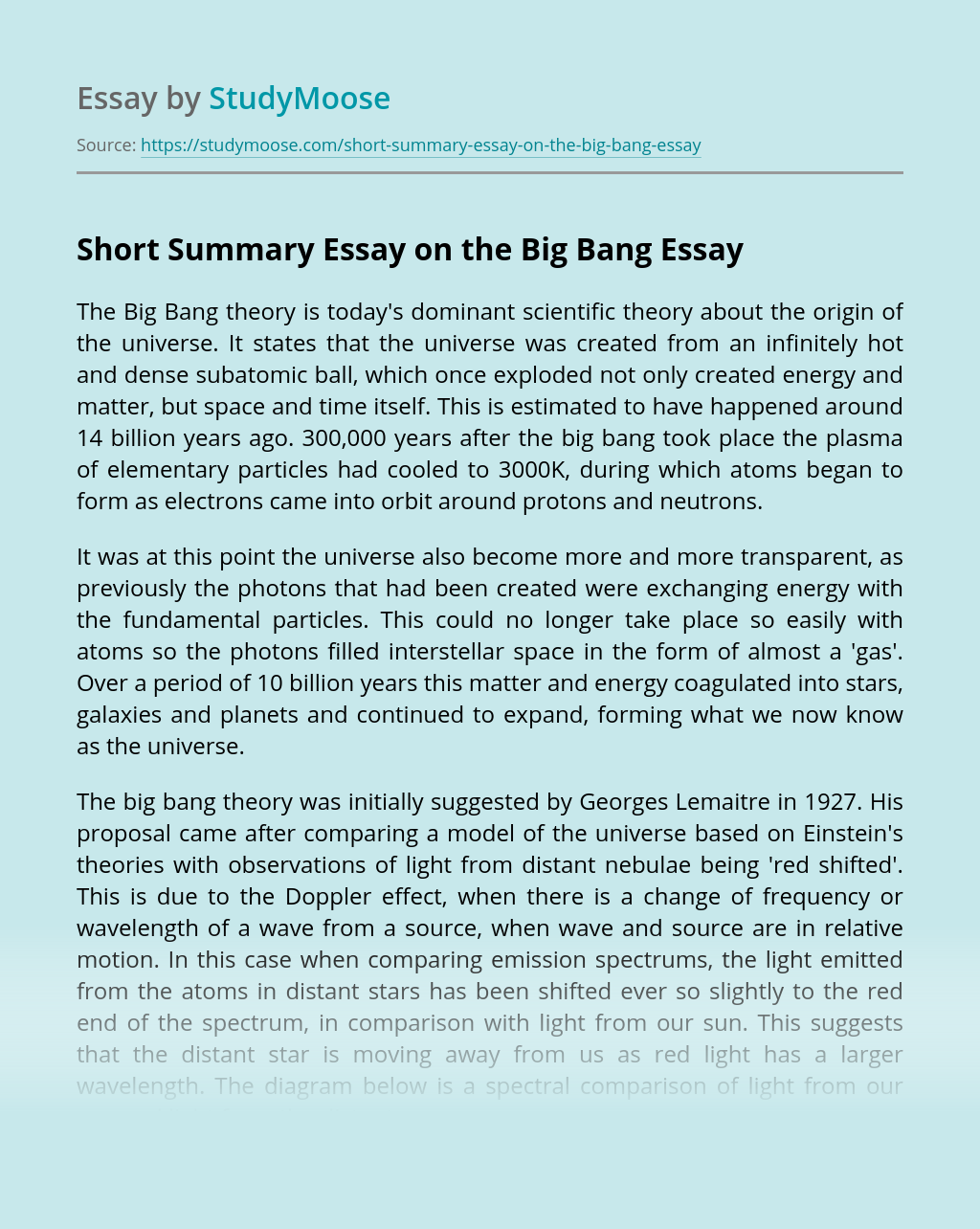