The Big Bang Theory: Beginning of the Universe

The beginning of the universe is explained in the big bang theory. It is proved beyond doubt that our universe had a beginning and that its origin was as a singularity about 13 billion years ago. This singularity was infinitely hot, small and dense. It had undergone a series of changes, which includes expansion and cooling to become the present form of universe. This theory is called the big bang theory. According to this theory the process of cooling and expansion is still continuing.

Don't use plagiarized sources. Get your custom essay on
“ The Big Bang Theory: Beginning of the Universe ”
Get custom paper
NEW! smart matching with writer

There are several evidences as well as arguments supporting this theory as well as opposing it.

The main intention of the present paper is to analyze these arguments in search of its validity. History of this theory, its religious interpretations as well as the features of the universe according to this theory also will be discussed in this paper. The big bang theory was proposed by scientist and Roman Catholic priest Georges Lemaitre and his called his theory as hypothesis of the primeval atom (Hubble, 1929).

The framework for this model was based on the Albert Einstein’s theory of relativity. Most of the astronomers today believe in this theory mainly because of the red shift that was observed in the near by galaxies.

Scientists believe that the universe is still expending because of the presence of dark energy (Big bang Theory, 2009). There are several features of the universe which support big bang theory. The abundance of light elements such as hydrogen and helium and less occurrence of the heavy elements or heavy metals in universe is actually in support of this theory.

This is because it is proved beyond doubt that at such a high temperature that persisted at the time of origin of the universe, the elements of mass numbers more than 5 and their isotopes would have been unstable.

This might have resulted in the formation of more light elements at that time. Presence of more matter than antimatter is another feature that supports the theory. Even now the scientists are not able to find a reason for this phenomenon. However, many scientists consider the asymmetry in the decay of some mesons as the reason for this phenomenon. Another feature of the universe is that it is composed of several galaxies and these are separated by cosmic voids.

The presence of a radiation in all directions which is quite even or uniform throughout is another factor that supports the theory which explains the origin of universe from a fire ball ( Big bang theory, 2009) One of the argument against big bang theory is that universe had its origin as an explosion. However according to experts it is better to imagine universe as a balloon with an infinitely small size and continuously increasing its size so as to reach the current size. It would be difficult to imagine the universe as a balloon bursting and throwing off its contents.

Another argument against this theory is that it universe e originated as a fireball in space. But according to the Einstein’s theory of relativity there could not be anything, space or time or matter or energy before the origin of universe. Thus this argument also has been proved to be baseless (Big Bang Theory – An Overview, 2009). There are many arguments or evidences that support this theory. Most of the people believe that universe had an origin. Edwin Hubble discovered that galaxies are moving away from us at speeds, which are directly proportional to the distance from us.

This provides evidence for the expansion of the universe, which was originally very small. The discovery of Cosmic Microwave Background Radiation (CMB) by Arno Penzias and Robert Wilson in 1965 provided evidence that universe was initially very very hot as it is explained according to the big bang theory. Another important evidence is the profusion of hydrogen and helium in the observable universe. This also supports the big bang origin of universe. According to the recent research by NASA and ESA, the universe had its origin from the remnants of a universe, which existed previously.

This is called loop quantum gravity theory (Zyga, 2008). This theory also supports the origin of the present universe as a singularity as in big bang theory. Still the arguments regarding the models to explain the origin of universe is continuing between great scientists. But one thing that has to be remembered is that whatever might be the arguments, there would always be a philosophical criterion involved and therefore these arguments are never going to end (Gibbs, 1995). Therefore as long as no one is certain about anything that happened at that time, the arguments would continue.

An important factor that has to be considered in the big bang theory is its religious interpretations. Origin of Universe is an area where science and theology places opposite views. According to Islam, Allah is the creator and Evolver of every thing in this universe. Of course the development of the universe to the present stage is something that is super natural and therefore there is nothing wrong in believing that there is a super natural force behind all these evolution and that supernatural force is God. The theologians as well as majority of people believe that it is not possible to evolve something from nothingness.

Estes (2009) has put it in a different manner. According to him this explanation of origin of universe is as absurd as believing that when there was an explosion in a place all the metal pieces joined in the air to form a car. He further explains that it cannot be believed that the different parts of the oldest computer one day exploded and then joined to form the most advanced computer now. This development took place as a result of long years of research by human beings. In the same way the development of universe to the present form, required the intelligence of someone who is super natural and that is God himself.

When we look at the stars, sun, moon and the galaxy as a whole, we see that they are all moving with accurate speed and timings in such a way that they do not collide each other. The earth is having the exact requirements for the life of man on it. All the requirements of the man are met through the other organisms as well as physical and chemical properties of the earth. It is very difficult to explain all these facts based on big bang theory (Estes, 2009). There is another school of thought in the Islam itself in support of the big bang theory (Huda, 2009).

The idea of singularity is present in the Quran also, where it is said that heaven and earth existed as a single unit originally. According to the big bang theory, the elements, which constituted the universe, had come together, cooled down and finally formed into the present shape. This is what exactly said in Quran, the only difference is that it was Allah who gave commands to these elements to behave in the way it had behaved. ‘Come together, willingly or unwillingly. ‘ They said: ‘We come (together) in willing obedience'” (41:11). The concept that Universe is expanding is also there in Quran.

“The heavens, We have built them with power. And verily, We are expanding it” (51:47). The fact that the universe is continuing to get expanded has been discovered only recently and it was the answer to the long debates by Muslim scholars on the exact meaning of this verse in the Quran. An argument in Islam against the big bang theory is that in Quran it is written that the creation of the universe was completed in six days. But in Quran itself it is written that one day of Allah could be 50,000 years for man. In another place it is written as 1000 years.

Thus the day could be regarded as an era with a fixed length of time. And six days could be six such eras, the length of which no body knows. Thus in this way also Quran is not contradicting the big band theory, which suggests that the origin was 13 billion years ago, and since then the formation of different organisms as well as the shape of the universe were gradual (Huda, 2009). Another aspect where Quran supports big band theory is that the process of evolution or the creation as Islam takes it, is never ending. It is clearly mentioned in Quran that Allah is continuing his creation.

This is what we see everyday, as a new child or as a new plant which is quite different from both parents (Huda, 2009). Considering all these facts the Muslims of the modern world believe that big bang theory is genuine and that the universe is ever changing. The only difference is that they believe that all these are happening according to the command of Allah and that everything that happens in the universe reveals the super natural power and majesty of Allah. It is stated that the creations are to be viewed upon, as tremendous power of Allah and His name has to be glorified.

Thus it could be seen that the Big Bang theory of the origin of Universe is the most widely accepted theory of cosmic origin. It is based on the Einstein’s theory of relativity. There are several features that the universe exhibits which supports this theory. Most of the arguments against this theory by different scientists have already proved to be baseless. More and more discoveries have been made in the last and present century, which supports this theory. Regarding the religious interpretation of this theory, in Islam, the origin of universe and earth and everything on it is explained in the same manner as the big bang theory.

Only difference is that, in Quran it is explained to have happened as per the command of God. It is quite logical to believe that there is a super natural power that is regulating all these happenings in the way it is happening so that we could exist happily and peacefully on this earth.

The Big Bang Theory: Beginning of the Universe. (2016, Aug 04). Retrieved from http://studymoose.com/the-big-bang-theory-beginning-of-the-universe-essay 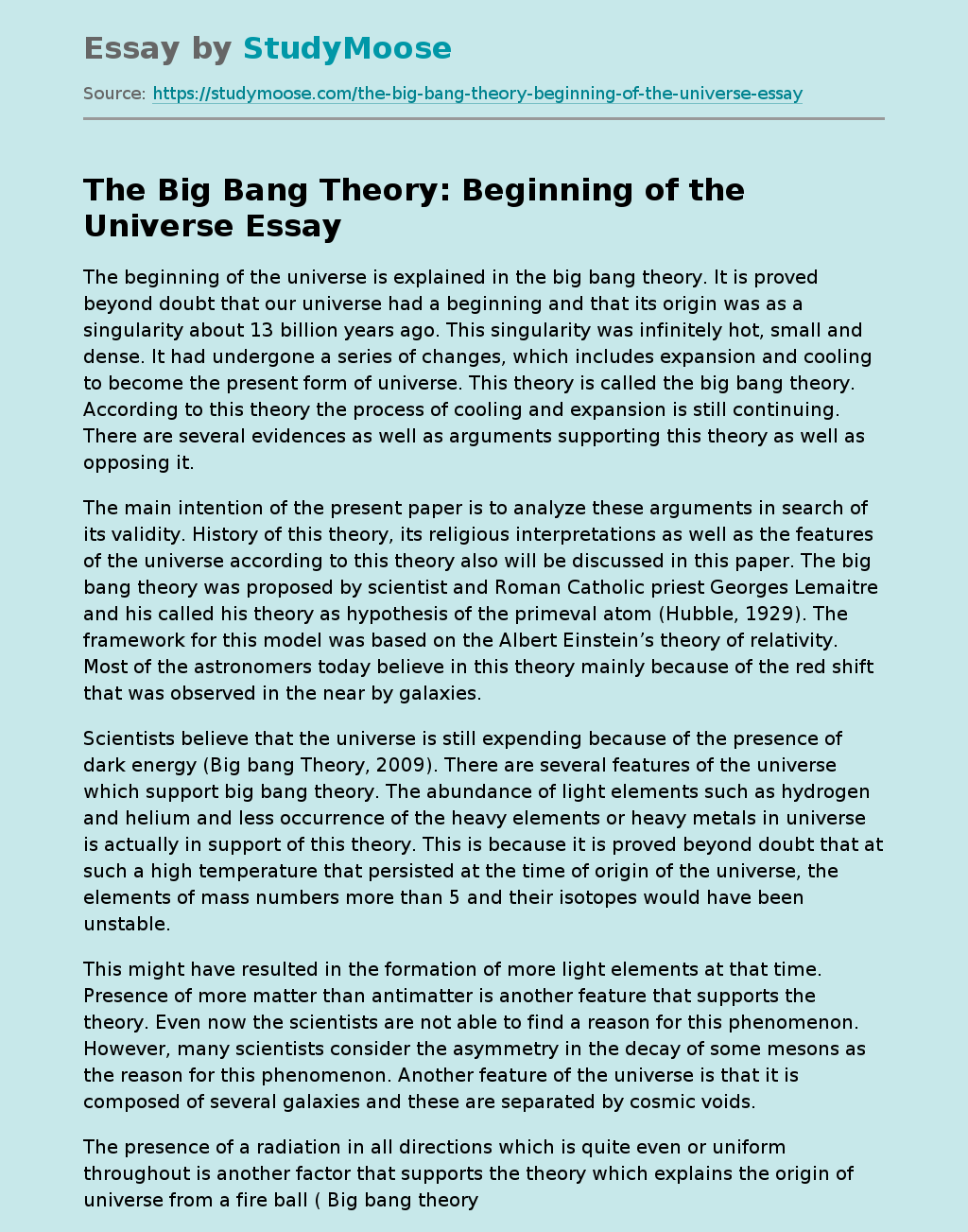