How does Shakespeare express conflict in the play Romeo and Juliet with reference to three scenes?

Shakespeare expresses conflict in Romeo and Juliet by using different types of techniques. These techniques include such things as strong powerful words and language to describe characters emotions towards each other and to describe fight scenes so that you can picture it in your mind. This essay will be exploring and explaining how Shakespeare expresses conflict between characters in the play Romeo and Juliet referring to three key scenes.

At the beginning of the play, in Act one, scene one, Shakespeare starts with a fight which shows the conflict straight away between the Capulet’s and the Montague’s by having a fight between the servants from the two houses.

Don't use plagiarized sources. Get your custom essay on
“ How does Shakespeare express conflict in the play Romeo and Juliet with reference to three scenes? ”
Get custom paper
NEW! smart matching with writer

The feud between the two families is between the masters who use their men to fight for them. We know this from when Gregory explains that “The quarrel is between our masters, and us their men.” This shows that the men see themselves as not only doing it as a favour to the family but that they also want to be involved and also hate the other family.

Furthermore it shows their loyalty towards their family because they stick by them and fight for their masters.

” However, Sampson trys to outdo Gregory and feeling very big Sampson says to Gregory, “I will bite my thumb at them.” Biting your thumb at someone was seen as a rude gesture a bit like sticking your finger up it today. This shows they are trying to be clever and they hope that Abram and Balthasar will not do anything.

However, they are much mistaken and Abram starts questioning Sampson who at this point is very worried and hesitates and starts saying “I do not bite my thumb at you, sir, but I do bite my thumb, sir” which shows that he is worried and is wary of what he says incase he says something wrong. However, Benvolio then enters exclaiming “Part, fools!” and this leads on to a short quarrel followed by a bigger fight including Tybalt and Benvolio now as well but luckily the officers soon come in and bravely stop the fight before anyone gets injured or killed.

This is one way of expressing conflict that Shakespeare used in Romeo and Juliet which I think is a very good effective conflict which starts from a gesture and leads to a fight where they even draw there swords to each other. However, someone comes into the scene and stops the fight to save the big fights towards the end instead of starting with a huge fight where people get killed and this is a more effective way of opening the play.

Another effective way that Shakespeare shows conflict is by using insults. In this case it also led to yet another fight. The fight starts when sly Tybalt begins to mock and provoke Mercutio by calling him “a villain”, to which Mercutio bites and replies “Tybalt, you rat-catcher, will you walk?” after drawing his sword. Romeo tries to calm down Tybalt to prevent a fight from arising. Romeo does not succeed however, and Mercutio exclaims that he is ready to fight with Tybalt. However, Mercutio loses the fight and Tybalt stabs Mercutio and the language and strong effective words that Shakespeare uses all contribute to the effect that is felt by the reader and the emotions that are felt during the fight and it is described so that it is emotional.

In conclusion, Shakespeare’s most effective uses to express conflict in Romeo and Juliet are by making the characters use gestures to offend the other characters to cause tension between the two characters which causes them all to start a fight using swords where people get stabbed and killed. The second and in my view most effective way that Shakespeare uses to convey conflict is using verbal insults passed from two characters in which they mock and provoke the other into making them fight to show the other that they are better and stronger.

How does Shakespeare express conflict in the play Romeo and Juliet with reference to three scenes?. (2020, Jun 02). Retrieved from http://studymoose.com/shakespeare-express-conflict-play-romeo-juliet-reference-three-scenes-new-essay 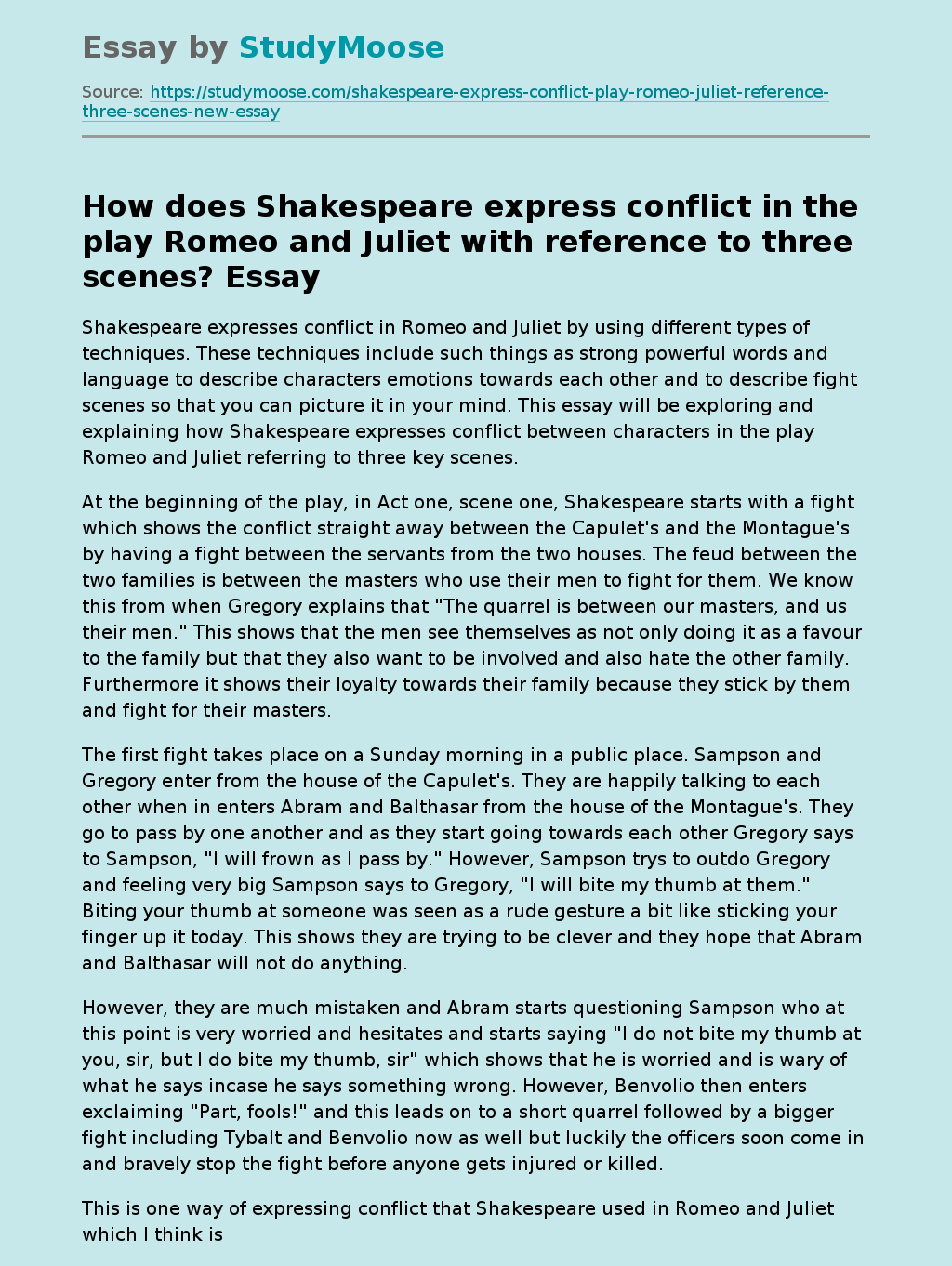