Today, many schools around the world enforce uniforms, requiring students to wear specific clothing. School uniforms, which was first established in 16th century England, are a topic of much debate in the public school system of the United States. Many people feel that uniforms reduce competition among students and bring a sense of unity in school. People who are against school uniforms think that they prevent students from expressing themselves and inhibits creativity. Many students dislike school uniforms because uniforms can be viewed as a violation of their rights, while others benefit from uniforms because it relieves the stress of picking what to wear to school.

Although school uniforms do have its benefits, they also limit self-expression. School uniforms are said to create a sense of equality among students.

With every student wearing the same clothing, there are less indicators of wealth between what people wear, so less students are bullied for the clothes they wear.

While that may be true for some, bullies don’t always make fun of their targets based on their clothing. There are many other aspects of people that are unaffected by uniforms ,which, bullies can use to bully them. It might be their hair or skin color, or the culture they’re from that causes the bullying. For example, students might get made fun of because of their race or the stereotypes that applies to them. Uniforms won’t protect students from bullying because clothing isn’t the only thing that bullies look at.

School uniforms can help improve the feeling of unity within schools, but pride in one’s school is dependent on being distinct and different from another school. There is rivalry between schools and school uniforms can lead to students being beaten up or worse.

For example, in New Zealand, a boy was beaten up by boys from a rival school. The boy said that the boys told him he should be shot because he went to a different school, which they could deduce from the uniform he’s wearing. School uniforms may give students a sense of pride and unity , but that comes with a chance of danger. It is a belief that school uniforms teach students to respect their learning environment and behave themselves, and, therefore improving discipline. However, that assumption isn’t entirely correct. Researchers have actually found that school uniforms don’t make students better behaved. According to a study of more than 4,500 students, those who wore a school uniform did not have fewer behavior problems or better attendance.

Forcing students to wear uniforms lead to more problems and misbehavior instead of encouraging discipline. Students could get into trouble if they did not wear their uniforms correctly. Many kids in today’s society cannot stand the thought of someone telling them what to do, especially what to wear. Instead of encouraging respect, uniforms may cause rebellions. For example, in 2009, a group of students at John A. Ferguson Senior High School rebelled against their school uniforms. Instead of following their school uniform requirements, the students wore what they thought would be a better school uniform to school. Not only uniforms don’t earn schools the respect from its students, but it may also lead to more problems. Some critics say that school uniforms increase the amount of clothing that parents have to buy for their children, meaning that they would have to spend more money. Students wouldn’t wear their uniforms outside of school, so parents would have to buy casual clothing for their child to wear outside of school. School uniforms may cost a hundred dollars or more per set and students would need at least 3 sets of uniforms for the week. Uniforms may be a financial burden for poor families, especially for ones that have many children.

Parents would also have to buy new uniforms when their child outgrows the last. Students would be more comfortable wearing casual clothing to school and it would reduce the burden on their families financially. The First Amendment of the U.S. Constitution guarantees its citizens freedom of expression. This many believe is violated by establishing mandatory school uniforms. The ability of students to express themselves are limited when they are forced to wear the same clothing as everyone else. Students use the way they dress to express themselves and to identify with certain social groups. Many students lose their self- identity when they lose their right to express themselves through fashion. Students should be able to experiment with their own individuality as it helps with shaping their character. School uniforms also violate the students’ right to freedom of religion, guaranteed by the First Amendment of the U.S. Constitution. If students are religious, they should be allowed to wear the clothes that express their religion, but school uniforms restrict this right.

Religious beliefs can be valuable and important to many students, giving their lives a great deal of meaning and structure. It can also inspire them to work hard and behave in a school environment. Some religions greatly value symbols of faith, such as headdresses and bracelets. School uniforms sometimes don’t support the students’ religious beliefs. For example, school skirts are often not long enough for Muslim girls, who believe that they should cover most of their bodies. Students should be able to follow the values that they hold so close. While some schools in the U.S. enforce uniforms, many schools have dress codes. Dress codes are similar to uniforms, but without the many disadvantages. Uniforms force students to wear the same clothes, while dress codes give students many choices of clothing.

Dress codes only prevent students from wearing inappropriate clothing to school instead of forcing them to wear specific clothing. Students are more comfortable that way and still get to express themselves through fashion. In conclusion, school uniforms aren’t as beneficial as they appear to be. It should be the students’ right to be able to wear appropriate clothing of their choice in school. This allows them to experiment with their creativity and develop their personality. Schools should promote diversity instead of equality by wearing the same clothing, because everyone is different and unique. Diversity helps people become friends as it helps sparks interest in each other. Clothing expresses a person’s unique personality and culture. It should be a person’s right to be able to show everyone their true colors.

There are more argumentative essays.

The most important benefit of school uniforms is the atmosphere it would create. With school uniforms kids couldn’t wear anything outrageous or abstract. This would limit distractions in the classroom, producing a better teaching and learning zone. Also, school uniforms would make for a better student teacher relationship because everyone would be looked at as an equal. Another distraction uniforms could remove is the problem with females wearing reveling clothing. Lastly, a majority of students can take up thirty minutes picking out there clothes for the next day. If uniforms were mandatory that time could be used to do school work or get a better night sleep for the following day.

Families would save an unbelievable amount of money from school uniforms. Students wouldn’t have to worry about buying the newest, hippest clothes which cost a fortune. That would save families hundreds of dollars. Sure, kids would still need clothes other than their uniform, but not as many. Families would also be more time efficient with uniforms. One example of this would be a smaller laundry load. In addition, you wouldn’t need to worry about rushing to get something washed for the next day because you already know what you will be wearing.

Bulling and labeling would be cut down if school uniforms were accepted by a school system. If uniforms were mandatory everyone would be equal and no biases could be set by someone’s apparel. Like wise, students couldn’t label someone as a scrub or high maintenance. When someone gets picked on, it is most likely because they are wearing something that is “not in” or because they are dressed “different”. If school uniforms were worn this would be a non-issue. Lastly, you couldn’t be labeled regarding your personal interests. For example, if you were wearing a band’s tee-shirt or a preppy clothing line. If this wasn’t and concern everyone would be open to each other and groups wouldn’t be made based on what you are wearing.

The only reason Student do not wish to wear uniforms is because they only care about looking good. However, they don’t know they can till look good in a school uniforms. Also, much more students would be open to school uniforms if they knew all the success they would get from them. Student and staff would have a much better school year if school uniforms were worn. 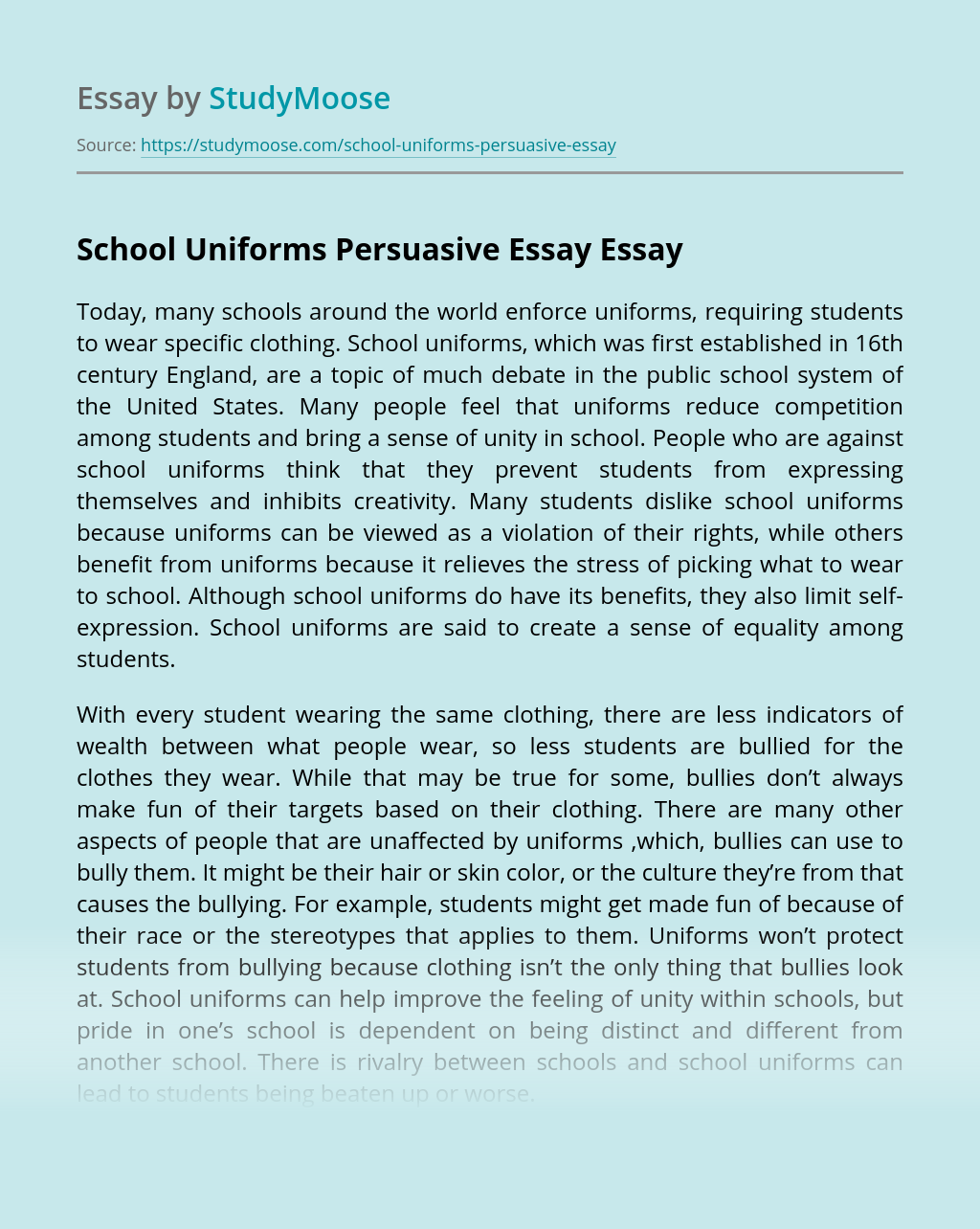