Today school uniforms have been a controversial debate. Just like any other debate, there are also many pros and con’s. School uniforms have a variety of unknown negative effects. But at the same time, they also have numerous positive effects. All of the positive effects are shown throughout the student’s attendance, academics, and lastly their behaviors. The negative effects are the annual cost, terminates the way the students can express who they are, and it also limits the whole concept of diversity.

Don't use plagiarized sources. Get your custom essay on
“ Dress Codes and School Uniforms ”
Get custom paper
NEW! smart matching with writer

By making school uniforms mandatory, many changes in a student’s behavior may occur. For example, by involving school uniforms into the system it may prevent the drama, harassment, and verbal abuse among the student body. But when students are able to choose their own clothing, they show how they want to express themselves. The student body will differentiate between each student obviously. But not everyone will like the way others dress. The younger group of children will humor themselves because of other children’s appearances and will often pick on each other.

Proficient in: Dress Code In School

Not everybody has kindness inside them which can cause some students to do unsympathetic actions that can hurt others. A student’s expression through their clothes can help build confidence in themselves. But with school uniforms put in place, it would so much harder to bully or tease each other because they are wearing the same thing. Their behavior in school has gotten students to focus more in their education. Many factors can supply for the positive attitude that people can have with school uniforms.

The major con to school uniforms is that it can limit to showing their self-identity and that is important to many of the students out there because this is also how people can find their friends. But it can raise the best in many students such as achieving better grades, creating less drama within the students, or even reducing the violence that takes place during school. But people can see other people’s clothing they can make general infer to see if they are compatible to be friends. Another reason is that, when people can show their individuality, it can boost ones’ happiness by a lot, and that can very much change their mood. Students that are in elementary through high school need some type of liberty while attending school to balance with the strict rules that a school can have with being able to express themselves in their clothing in a positive way. Not only that but they can get very pricey. Everybody in the school does not own the same amount of money, so this can be troublesome for some families out there. Some families out there would not have a problem paying for several uniforms to wear each day of the week. Each uniform can be expensive enough just for one uniform, but to multiply it by however many days there are in a week can add up to a pretty high number.

All in all, school uniforms may have a negative impact on students, but it is they who can change the way the negative features to positive. Eliminating a person’s individuality isn’t always true, but when the weekend comes around they can be as creative and wear whatever they want because it is their right to being able to express their individuality. Fewer distractions, students can go to school with a purpose, less competition between others will create an environment in which all students can become a greater person. 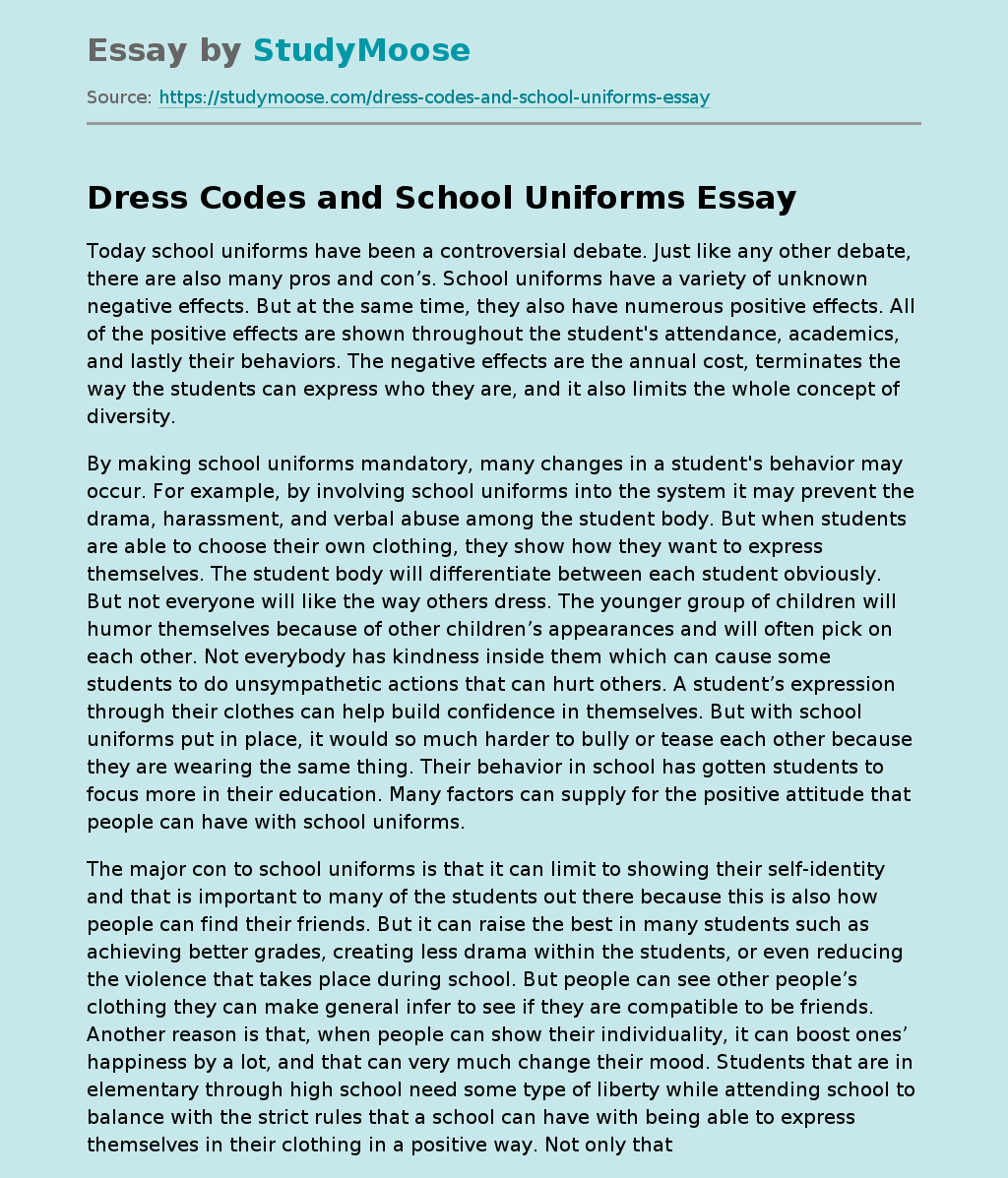