Enforcing uniforms in all schools has been an ongoing controversial for many years. Some school administrators and parents state that uniforms take away the opportunity to express oneself. However, most superintendents and administrators say uniforms display mainly positive effects among the school. Uniforms should be enforced in all schools around the globe to prevent some of the everyday issues that goes on.

Opponents say uniforms takes away freedom of expression. According to Bhattarai, a superintendent, states that some parents claim they want their kids to be able to express their selves through their clothing.

Don't use plagiarized sources. Get your custom essay on
“ School Clothes or School Uniform? ”
Get custom paper
NEW! smart matching with writer

Uniforms should be displayed in all schools to promote equality. Critics say that uniforms do not promote unity instead it promotes conformity over individuality. Bhattarai also states that they are too strict, and students should have a say so on their appearance without the governments input. The First Amendment gives people the right to freedom of expression and Bhattarai says that should be respected. Despite the supporters of uniforms, Bhattarai also states in his article, “uniforms should not be enforced because of the freedom it takes away.

” Lack of freedom of expression and conformity over individuality is displayed when uniforms are present, but the positives outweigh the negatives.

Uniforms create a level playing field among students, reducing peer pressure and bullying. In Ashby article she states the voice of Jeff Ritz, superintendent. He states, “Uniforms has helped give a business-like attitude and helped with a feeling of being prepared for life.” When uniforms are present it improves attendance and self-discipline.

Peer pressure and bullying is also reduced when uniforms are present. According to the U.S Department of Education it improves the school’s climate because everyone will appear as equals. A level playing field is a concept about fairness and with uniforms this is accomplished. It puts everyone on the same page, and it do not make one student feel better than the other. The Ohio School Boards Association President Linda F.R. Omobien addresses the fact it softens the difference among socioeconomic levels which makes everyone feel equal. Lima Highschool superintendent, Karel Oxley, states bullying rates have decreased since the enforce of uniforms in 2006. Bullying has taken so many lives around the world due to an individual’s clothing. It is statistically proven that bullying rates where uniforms are enforced are lower than schools where uniforms are not enforced. The rates around the world can all go down if this issue is pushed forward and activated. Therefore, uniforms should be enforced throughout all academic stages to decrease bullying activities and adjust student’s concentration primarily on their education and not about what the next student has on.

Uniforms will improve a students’ individuality because they will have to express themselves through clothing, rather than a piece of name brand clothing. With the implementation of uniforms students no longer must waste time thinking of what they are going to wear to school. Safety is also promoted when uniforms are present because of the display it puts on students. According to superintendent Lodi Frank Quatrone says, “An intruder can easily be identified and removed in school or on school grounds before, during or after school hours.” This statement should be taking into consideration around the world because school shootings increase every year because of the lack of uniforms. 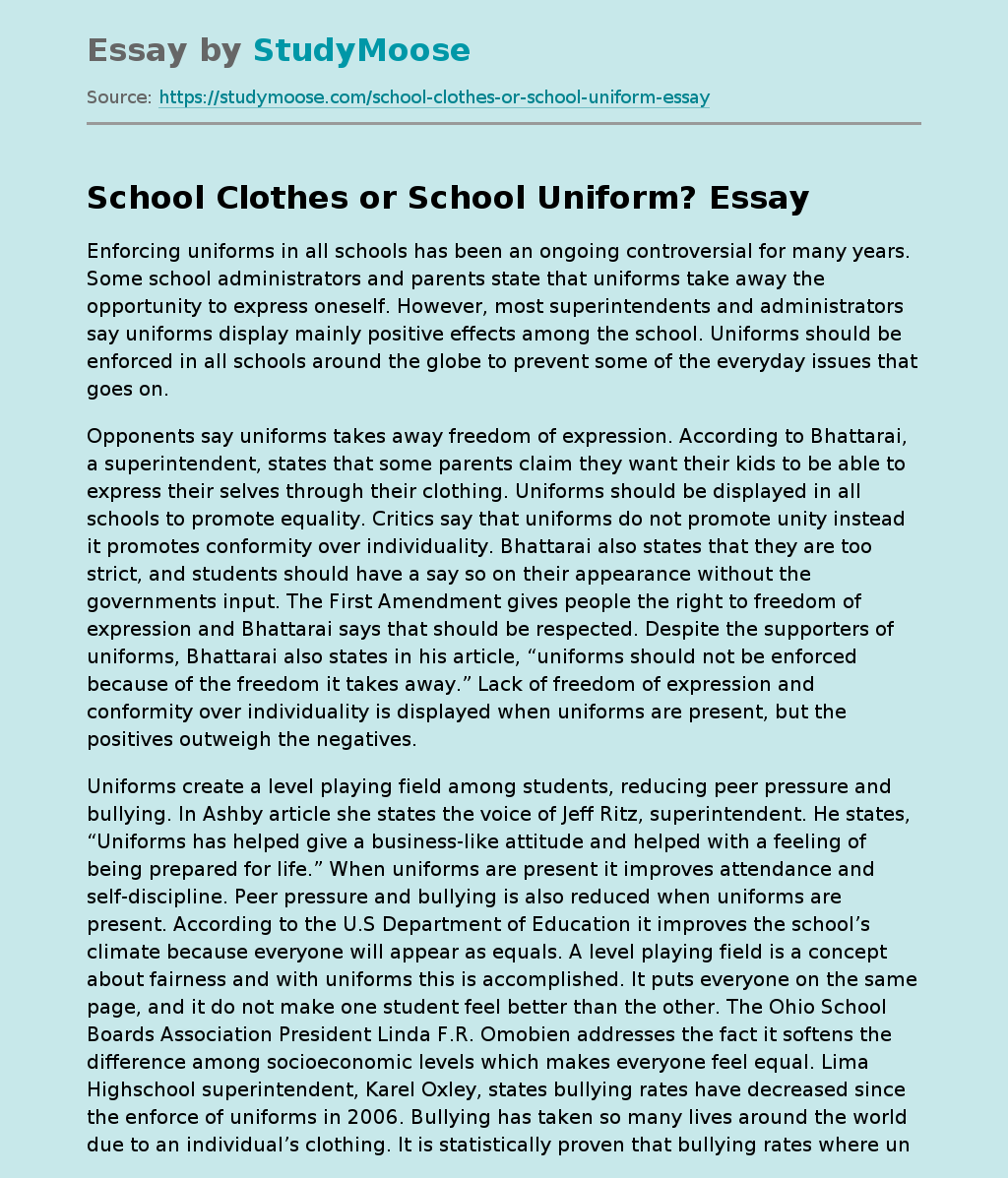