Symbolism is a powerful tool in literature, allowing a writer to deliver a deep meaning through ordinary people and items, and even through seemingly mundane events. In the short story “Swaddling Clothes”, our author, Yukio Mishima, uses symbolism in his characters and his setting to convey to his readers his rather bleak outlook on the future of Japan. His use of symbolism forces us to really think about the story’s message, allowing for a more memorable and thoroughly more enjoyable reading experience.

Don't use plagiarized sources. Get your custom essay on
“ Swaddling Clothes ”
Get custom paper
NEW! smart matching with writer

In “Swaddling Clothes”, many symbols were used to show Mishima’s perception of post-World War II Japan and the future he feels it faces. The characters Mishima used in this story are strong examples of symbolism on their own. Mishima uses Toshiko, the frail, traditionally-oriented, higher-class protagonist, to represent traditional Japanese values. In the story, Toshiko shows her distaste for the Western-style furniture in her house, and appears to be the only one who is truly disturbed by the birth of the child and the newspaper swaddling the infant was given.

She alone in the story frets about the child’s terribly dishonourable birth, and worries that he will grow up to be an angry, resentful, impoverished man because of it.

It appears that Mishima used Toshiko’s character to express many of his own opinions about Japan’s future. Meanwhile, the husband is used as a symbol to represent the Western influence on Japan. His profession is a very west-influenced one, his mannerisms appear Americanized, and it can be inferred that he played a large part in decorating his and his wife’s house with Western-style furniture.

When Toshiko wants him to go home with her, he instead goes to his business meeting, choosing his work above his wife. Mishima juxtaposes the husband against the wife to further emphasize the difference between their personalities and their symbolic meaning.

However, Toshiko and her husband are not the only symbolic characters in the story. The illegitimate child represents Japan’s future and is another strong symbol of how Mishima feels about westernized Japan: it lacks the honour that it should have. The old newspapers that the baby was swaddled in are reminiscent of newspapers that are used to wrap up garbage, symbolizing that the infant (and, by extension, Japan’s future) is no more than trash. This symbol is reinforced by the newspapers covering the young homeless man sleeping in the park. However, at the same time, Mishima’s use of an ambiguous ending is reflective of his admittance that he doesn’t quite know where the future is headed.

However, the characters aren’t the only symbolic things in the story. Mishima also uses symbolism within the setting he places his characters in. At the beginning of the story, Toshiko finds herself and her husband in a night club, a very American-style outlet. However, Mishima then juxtaposes the nightclub setting with that of the Imperial gardens, an extremely traditional Japanese setting. This use of contrast further reinforces Mishima’s opinions of the two—the Western night club is noisy and does not belong in Japan, while the gardens, tranquil and beautiful, show us what Japan should be.

Another use of symbolism in setting is in that of the house that Toshiko dreads going back to. Reminiscent of Japan in the aftermath of the Second World War, the house is strange, filled with foreign things that don’t feel like home, and haunts Toshiko with a horrifying memory.

Symbolism is a much-used and effectively-used tool in “Swaddling Clothes”. Through his portrayal of his characters and the setting, Yukio Mishima illustrates the bleak future that he feels Japan will face, due to the increased ‘westernization’ of the country. The symbols that he uses throughout the story help to show the readers that he feels Japan is losing its honour due to the increasing influence of our culture. The symbols in the story and the altogether theme of the story give us, as readers, much to think about, and weave a moving, meaningful tale.

Swaddling Clothes. (2016, May 04). Retrieved from https://studymoose.com/swaddling-clothes-essay 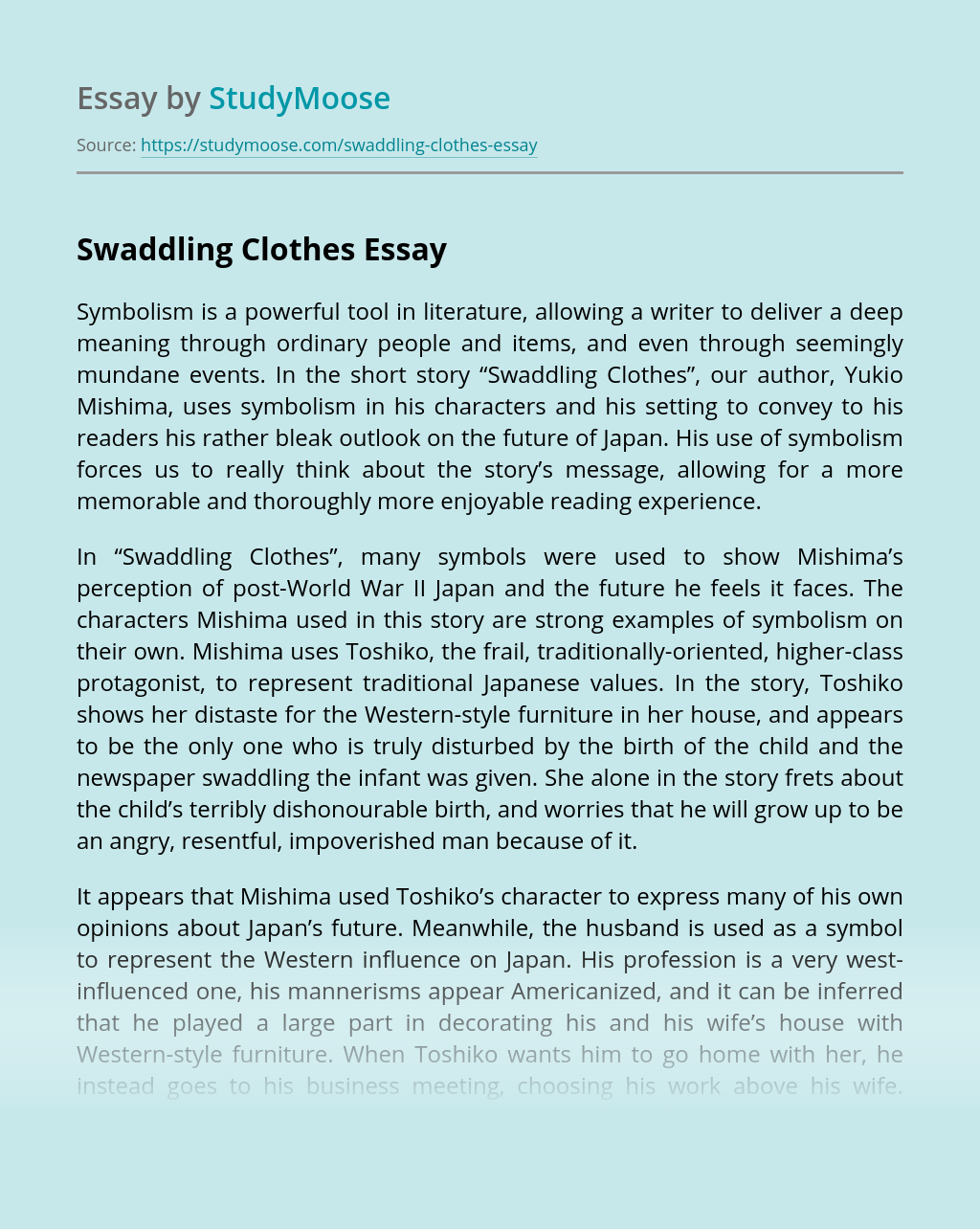