Essay topic: Runner shows that even though the world can be harsh and miserable, there are good people out there who make life worthwhile. Runner, by Robert Newton, is set in the slums of Richmond 1919 and also happened to be the home of the infamous gangster, Squizzy Taylor. The novel is about a 16 year old boy named Charlie Feehan, who is trying to survive in a cruel and depressing world. Although his life is tough, kindness and love are still shown through the actions of people such as his two neighbours Mr and Mrs Redmond who care about him.

Turn in your highest-quality paper
Get a qualified writer to help you with
“ Runner Analytical Essay ”
Get high-quality paper
NEW! AI matching with writer

Charlie lives in a time where poverty seems to affect everyone. With the support of his family, his neighbours and his best friend Norman, Charlie begins tho think that life might not be so bad after all. Charlie’s family is going through and extremely rough time. After his father’s death from the Spanish Flu, Charlie and his family have lost their main source of income.

They don’t even have enough money to buy basic necessities. They are so poor that they have to take donations of food from their neighbours in order to live. “We could stop takin’ ‘andouts and leftovers…” (p.26) In a world without government welfare, they were struggling even more to put food on the table. Even though Charlie and his family are extremely poor, the support and care they receive from their neighbours (who are just as poor as them), proves that though the world may be comfortless, there are still good people who make differences in other people’s lives.

Despite the fact that Charlie leads a challenging life, he has wonderful neighbours who look after him. Charlie is very close with his two neighbours, Mr and Mrs Redmond. In fact, he thinks of them as more than just neighbours. “…they were more like grandparents to my brother and I.” (p.1) Mr and Mrs Redmond treated Charlie very well. They even took time out of their lives in order to help Charlie train for boxing. When Charlie decides that boxing just wasn’t his game, Mr Redmond fully supports his decision, and even offers to help Charlie train for the Ballarat Mile Running Race, saying “ya know, I could train yer, if yer like…” (p.123) This shows that there are still loving neighbours in Charlie’s world, who go out of their way to help him. The people that Charlie love are being badly hurt by others. When Charlie walks in on his mother being assaulted by Mr Peacock; the man who runs the local wood yard, he goes blind with rage and
slams a cricket bat down on Mr Peacock’s head which results in Mr Peacock to be knocked unconscious. The incident causes Ma’s behaviour to change very dramatically, and it takes her several months to return back to her normal self again. “She’d begun covering not only the bruises, but her entire face with powder.” (p.79) Charlie’s mother is slowly fading away to a point where she can’t face herself, let alone the miserable world she lives in. She shuts herself off from Charlie and his baby brother Jack, and doesn’t properly take care of them. Although bad things happened to Ma, she is constantly encouraged and supported by Charlie and Mr and Mrs Redmond, who care about her. Charlie’s develops feeling towards Alice Cornwall. He first becomes attracted to Alice when he sees her at his best friend Norman’s football game. He later meets Alice working in her father’s shop. After he tries to force them to repay money that they owe to Squizzy Taylor, he realises that it wasn’t the right thing to do. He pays their debt to Squizzy and earns her love later on. “Alice Cornwall threw me a smile and I melted.” (p.159) Any type of relationship was cherished immensely by the poor.

Charlie father once told him “Whatever you do…find yerself a girl who can dance.” (p.127) Charlie is lucky enough to find Alice, a girl who can dance with him. Even though Charlie’s family is very poor, the relationships that he’s formed with Alice, Nostrils and the Redmond’s keep him happy and strong. For the poor, survival in the working class slums of Richmond, 1919 was extremely difficult as there was absolutely no government assistance. Each day, Charlie and his family struggled to make the most out of measly pickings. Life was very difficult for Charlie, but through the help and encouragement of his friends and family, he has found a way to be happy. The desolate world that Charlie lives in hasn’t impacted him. The only things that matter to him are the people he is constantly surrounded by such as, his best friend Norman and Alice. Although Charlie’s father dies and leaves his family in poverty, he, his mother and baby brother are looked after by their neighbours who care about them. With the aid of Mr Redmond, Charlie makes it to Ballarat, where he competes in a running race and gambles all his money, in hoping to gain financial security for his family. That risky gamble pays off for him and Charlie’s family is able to live comfortably again. The world may have been horrible and miserable, but as long as Charlie had his friends and family he was content. 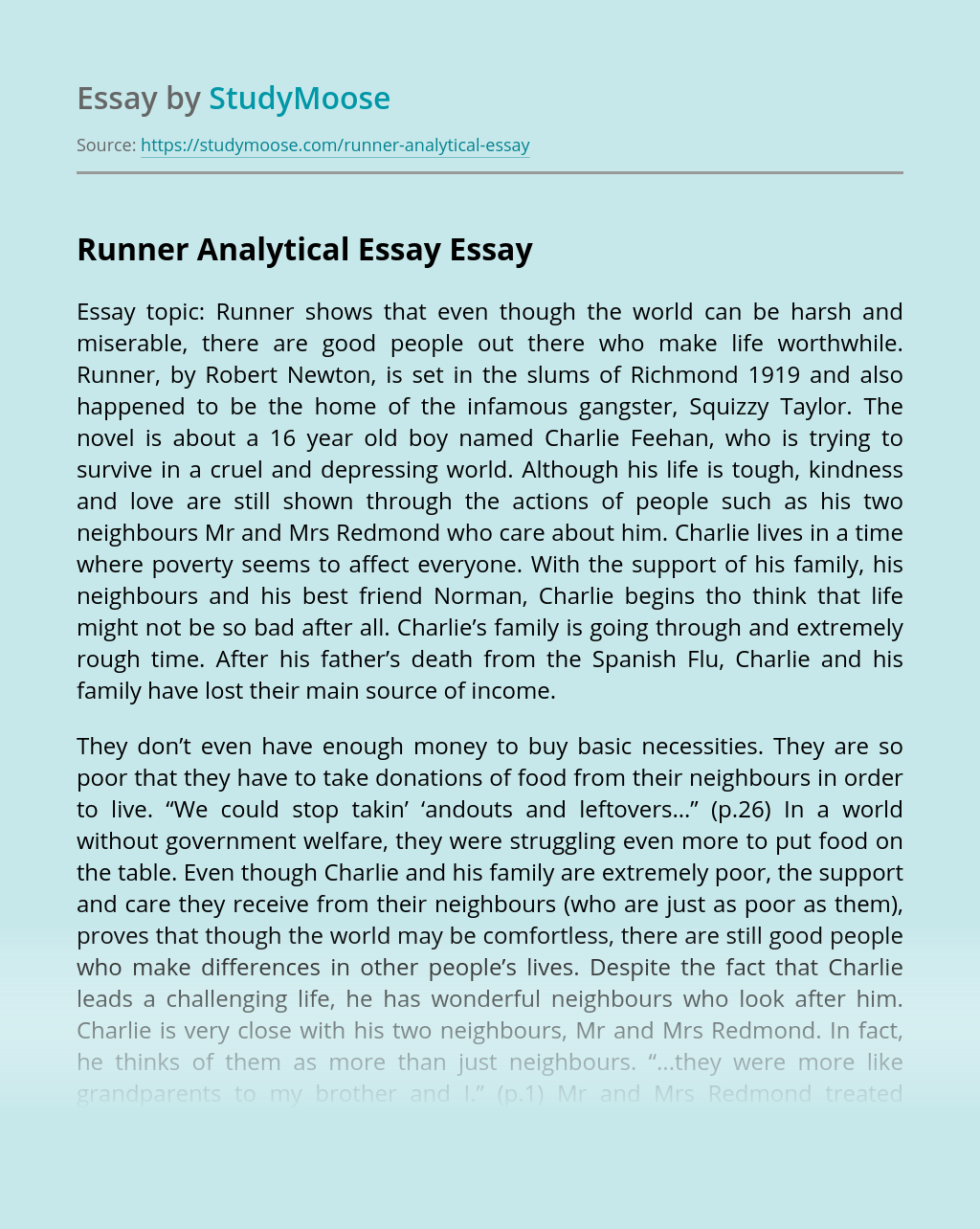 Turn in your highest-quality paper
Get a qualified writer to help you with
“ Runner Analytical Essay ”
Get high-quality paper
Helping students since 2015
Stay Safe, Stay Original