At the beginning of Macbeth, Macbeth writes a letter to his wife telling her of his encounter with the three witches. Lady Macbeth’s comments reveal one aspect of their relationship: “Yet I do fear thy nature.

Don't use plagiarized sources. Get your custom essay on
“ Role Reversal in Macbeth ”
Get custom paper
NEW! smart matching with writer

It is too full o’ th’ milk of human kindness to catch the nearest way.” (1.5.25-27) Macbeth and Lady Macbeth clearly have an intimate relationship. Macbeth even calls his wife his “partner in greatness,” (1.5.11) meaning that not only is she special to Macbeth but they might have a shared ambition. Macbeth and Lady Macbeth both have ambition which affects their relationship. Macbeth is ambitious, but only to the point where he struggles with the question of killing King Duncan.

Lady Macbeth, on the other hand is truly ambitious and almost Machiavellian.

She influences Macbeth and is the one who comes up with the plan to murder King Duncan and she even later wishes to be “unsexed” and would even have “plucked my nipple from his boneless gums and dashed the brains out.” (1.7.57-58) There may not be an exact role reversal as Macbeth is still the one who murders King Duncan. However at the beginning at least, it does seem that Lady Macbeth is the one who is more willing to kill.

Macbeth and Lady Macbeth do have a special relationship where one needs the other. However, their relationship might not be a loving one, as it is understood today.

After committing regicide and ordering Banquo’s assassination, it’s apparent that Macbeth is a changed man. He could be described as paranoid for sending assassins after Banquo and his son and even sending another assassin to kill Banquo’s murderers to hide the evidence. He’s even desperate enough to see the three witches once again. All of this must have taken a toll on his relationship with Lady Macbeth. Their relationship up to this point probably included some level of affection but whenever Macbeth interacts with his wife, she is always directing him in some way. In the beginning before Duncan’s murder she almost orders him to man up. Even after Duncan’s murder she tells Macbeth “These deeds must not be thought after these ways; so it will make us mad.” (2.2.36-37)

In an ironic twist it is Lady Macbeth who soon goes insane and is seen sleepwalking and trying to wash out some spot. Finally, the strain of being a king in “borrowed robes” affects Macbeth. Upon his wife’s death, he almost coldly says “She should have died hereafter.” (5.5.17) The rest of his lines are devoted to talking about how life is pointless. He might be blaming futility of life and how she was going to die anyway but simply the fact that he devotes a line to her former wife shows what has changed in Macbeth. By the end of the play Macbeth in a way “mans up” by being ok with murder while Lady Macbeth succumbs to insanity. Macbeth and Lady Macbeth had a relationship where they may have loved each other but they were more accomplices than admirers 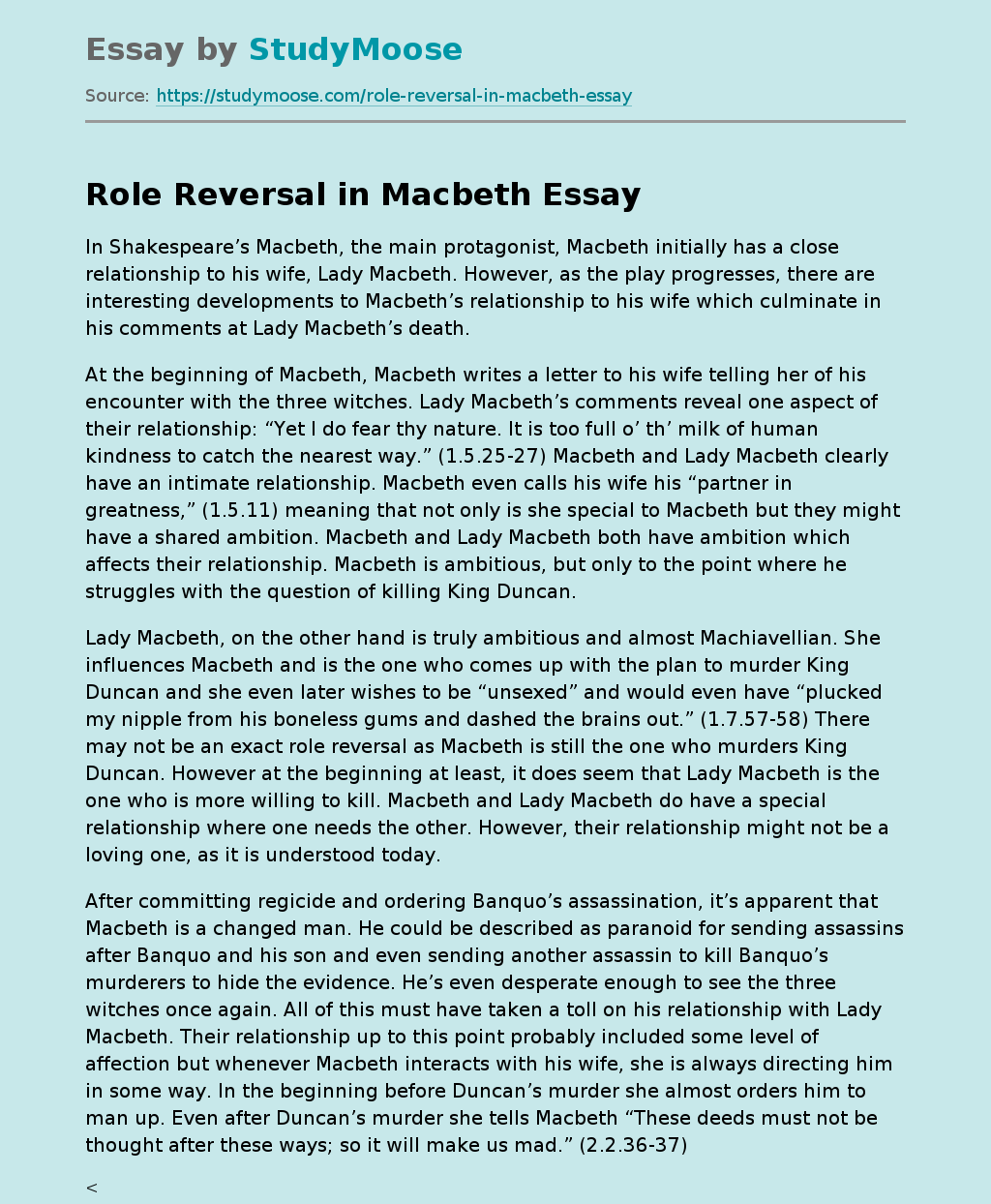