In Shakespeare’s Macbeth, intense influence of hallucinations forcibly alter and destroy Macbeth’s once virtuous and principled self to submitting towards intense ambition. Trudging through his guilt, Macbeth’s inner thoughts assist in morphing to become a monstrous tyrant. In Rupert Goolde’s 2010 film interpretation of Macbeth, Lady Macbeth uses her impulsive convincing skills to ultimately trigger Macbeth, played by Patrick Stewart, to kill for the throne. Once convinced to take on the murder of the previous ruler, Duncan, Macbeth presents a mental soliloquy where he faces an imaginative dagger and contemplates how this brutal killing will overtake his noble nature.

Don't use plagiarized sources. Get your custom essay on
“ Role of Macbeth’s Hallucinations ”
Get custom paper
NEW! smart matching with writer

Goolde’s brilliant use of framing, editing, and Stewart’s acting all beautifully blend together to create a more suspenseful and authentic showcase of the play.

Powerful hallucinations of Macbeth’s mind expedite his desire to push through and complete his devious plans, despite his original anxious and tense nature over the future consequences of his unforgivable sin. Object-involved hallucinations act as the connection between seemingly external world objects and internal feuds one might have trouble dealing with silently.

Director Goolde illustrates this internal conflict through camera angles and lighting, or quite frankly, lack thereof. As Patrick Stewart’s Macbeth questions the dagger hallucination, Goolde makes the conscious decision to limit camera movement and mainly focus on Macbeth’s face. In doing so, Goolde eliminates all other possible distractions that could potentially shift viewer’s attention away from Macbeth’s words, just as Shakespeare himself would have wanted. It creates great tension and anticipation, since viewers are staring directly into the crazed eyes of Macbeth as he speaks.

In addition to this, Goolde also decides to light Macbeth’s face in such a way where half of it is in the light and the other half is hidden in the shadows. This alludes to the mental battle of good versus evil that Macbeth endures within the scene; the good in him being the side that initially questions and hesitates upon seeing the dagger and the bad in him being the side that essentially embraces the dagger towards the end of the soliloquy.

Although he does not believe it at first, Macbeth’s mind gradually loses all regards of morality and sense of truth and justice through his choices of action. False vision of a dagger helps to convey the mental state of Macbeth being vexed by the tremendous levels of anxiety he has over killing Duncan, even though at this point in the play, he has yet to complete the deed; his conscious generates a fear of his inherent character and temperament. Through metaphoric representation, Macbeth’s false dagger proves to be filled with the ultimate sin of bloody murder, deceit, and loss of integrity. Though, however fearful and worrisome Macbeth may appear through the beginning of his hallucination, towards the end of his thoughts he comes to a realization of where his true path lies when he speaks to the false dagger in front of him and says “thou mashall’st me the way that I was going”, accepting the fact he was already heading towards the effects of his crude temptation of power and unethical triumph (Macbeth 2.1.43).

As Stewart finishes presenting his soliloquy, Goolde’s only other camera shift goes to Macbeth walking boldly in a dim-lit passageway towards his goal of killing Duncan; now fully covered in the darkness of the shadows, Goolde’s cinematic camera direction further emphasizes how the evil has now completely taken over Macbeth’s soul. The urge to become the sole, most powerful ruler of Scotland is now fully instilled inside his mindset, as he is now just as fully committed and prepared to go through with the vile stabbing of King Duncan for his own benefit.

Patrick Stewart’s Macbeth transforms into a blood-curdling subsequent to learning of his fate as the future Thane Of Cawdor through Stewart’s awe-inspiring acting. Although other actors’ decisions to make extra motion gestures and facial movements when partaking in the role of Macbeth dramatise the story and make it more comprehensible to the audience, Stewart and Goolde’s approach of keeping things simple and more raw make the story more realistic and truly captivating. In this 2010 film adaption of Macbeth, less is truly more. In other interpretations of the play, actors choose to portray the character as heinous, evil, and insane. Although Macbeth is all of those things, he is also just a mere man. Macbeth may have turned corrupt and malevolent but he was once just a simple man, like the rest of society. In portraying him as “man gone bad” rather than “nefarious overlord”, audiences can reflect and take note on how Macbeth is just like us; Macbeth is a warning to show that if one isn’t careful, they have the possibility of turning out exactly as cunning and destructive as he.

Making listeners conscious of themselves and the world around them is Shakespeare’s true intention. Shakespeare’s works are always meant for audiences to be able to put a mirror up to themselves and recognize that all characters are real people in real life that live among us, they’re ourselves on written paper. Shakespeare’s plays give insight into human history and human behavior, and show audiences the faults and triumphs of all individuals. He wrote about humanity’s innermost thoughts and struggles, love and sacrifice, and the battles of the mind. Macbeth was never meant to be played as some mystical super villain, he was meant to be played as realistic as possible; Macbeth was meant to be treated as an example, a naked lesson. Patrick Stewart does this by neither overdramatizing his lines nor his body language.

In Roman Polanski’s 1971 adaptation of Macbeth, actor John Finch constantly shifts his head and moves around his hands. During the line where Macbeth looks at the hallucination of a dagger as if it were “proceeding from the heat-oppressed brain”, comparatively expressing his fear of wrongdoing to the heat of sin, Stewart says his line as if he were talking to a mirror while Finch raises his hands to cover his face; this motion wrongly takes attention away from the overall depth of the line and refocuses it on hand gestures. (Macbeth 2.1.40). Not only does Finch’s over dramatization take away from the human feel of authenticity of the play, but Polanski’s use of special effects does as well. Despite some individuals believing the sound effects and animation make the film more understandable and entertaining, the electronic bells and whistles actually take away from the natural, realistic, and suspenseful tone Shakespeare originally wrote the scene in. Even though editing effects might make the movie more amusing, it is simply too cheesy and wonderlike which makes the overall story appear much less credible and valid.

One of Shakespeare’s most widely known works, Macbeth, has fans all worldwide. Both Polanski and Goolde’s movie interpretations show great artistry and immensely creative film directing, Rupert Goolde’s 2010 interpretation rises slightly above the others due to Goolde’s camera management, Patrick Stewart’s realism in acting, and minimal editing. Whether Goolde fan or not, the emotional connection one experiences when viewing one of Shakespeare’s works will forever be strong. Shakespeare and his Macbeth have made such a valuable impact on the world and will remain a timeless classic for years to come. 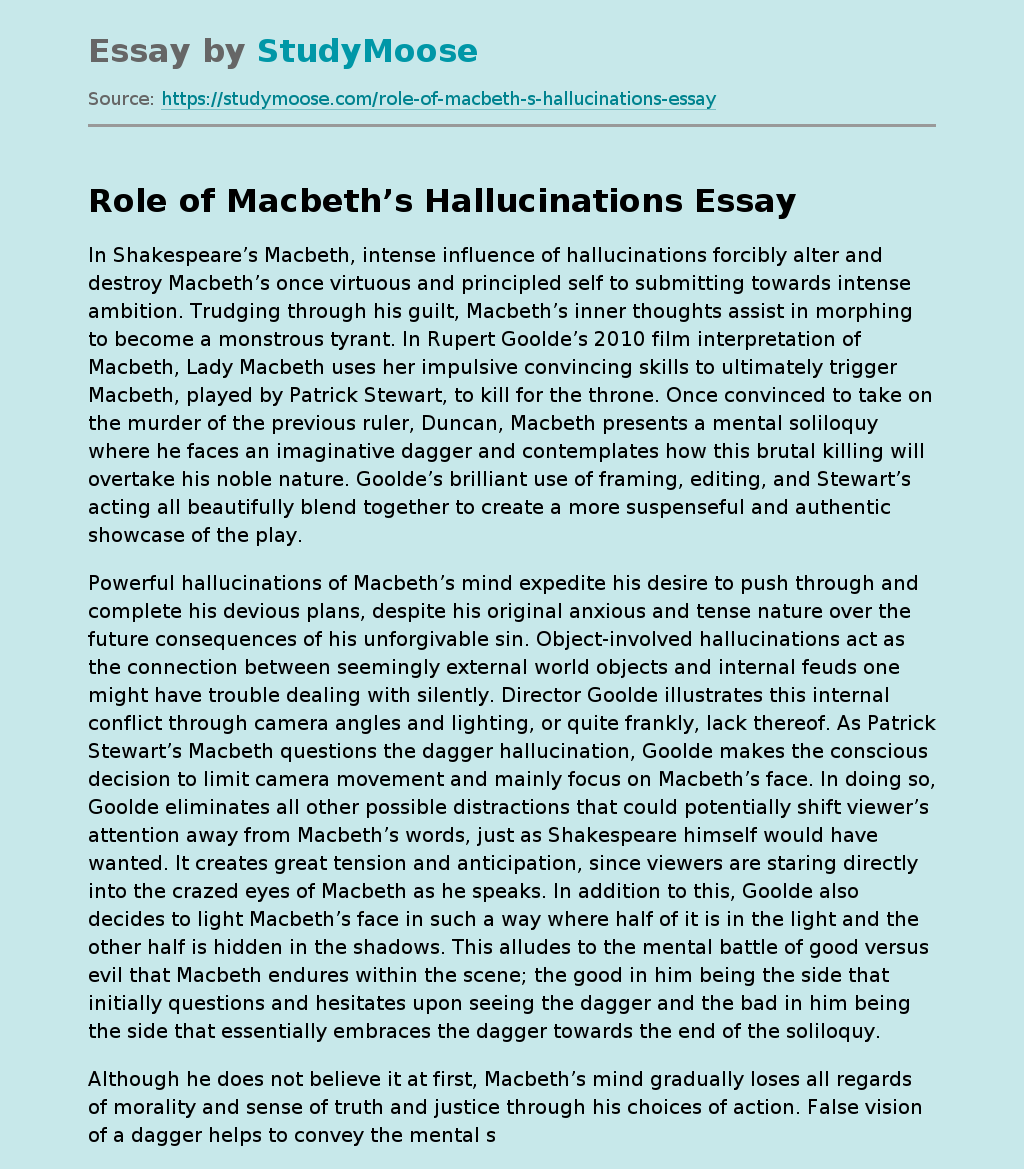