Your total answers that you write must be 1000 words minimum. To be submitted by due date to Blackboard. Type your answers and include your name. Unless you are in an online course, you must be in class on the date we discuss the case for full credit. Make sure your answers are very easy to understand and identify. Separate each answer with its own paragraph and a heading in underline or bold. Use bullets and numbering for easier reading.

What are the goals and objectives of Robin Hood and his band? What is it that they are trying to accomplish? Robin Hood aims to steal from the rich and give to the poor in order to form a strong and well organized group to fight against the current sheriff and his administration, who charges high taxes of poor people.

Turn in your highest-quality paper
Get a qualified writer to help you with
“ Robin Hood – Case Analysis Questions ”
Get high-quality paper
NEW! AI matching with writer

Create a basic organization chart for Robin Hood and The Merrymen. Write each person’s name and what they are responsible for doing.

Name
Position
Responsibilities
Robin Hood
Director/ CEO
Responsible for the main decisions of the group, delegating tasks and defining responsibilities to the managers.

Will Scarlett
Operational Manager
Responsible for the intelligence, analyzing the opponent, checking their next moves and collecting information about the opponent.

Scarlock
Financial Manager
Responsible for converting loot to cash, payment of shares and save the money in a safe place.

Much
Logistic Manager
Responsible for providing all the basics necessities that the band needed
like food and shelter.

Robin is a strong and good leader.
Strong support from the farmers and poor people
Band members are increasing, creating a stronger group to fight the sheriff.
The group is organized, there are qualified people in each area and each person has specific tasks.

Discipline is harder to enforce since the band is increasing. Robin doesn’t know several members of the group.
Buying food for the whole band is draining the bank’s financial reserves. Exceed the food capacity of the forest.

The sheriff is getting more organized and stronger.
The sheriff had powerful friends at court and was well regarded by the regent, Prince John.

Revenge by the Prince John

Think about your SWOT analysis, and answer the next 4 questions. Think about how each of the 4 opportunities would help (or not help) to solve Robin Hood’s problems. A plan that does not solve our problems or achieve our goals is useless. Also a plan that we cannot execute is also useless.

What is your opinion about expanding the band’s operations to a larger area around Sherwood Forest as a way of solving these problems? Why or why not is this a good idea? First Robin and their managers should draw a new plan and reorganize the group before expanding the band to a larger area. Expand the band would help in the cash flow, but the band would need more specialized people in each area.

Do you think make sense to impose a fixed transit tax to counter the decline in revenues? Why or why not? I think it is not the best option because it is against the principles of the band and if they start to charge taxes they would lose the support of farmers and the poor people.

What are the pros and cons of accepting the offer of the Barons to assist in securing King Richard’s release from prison? Do you think this is a good plan? Why or why not?

Pros:
Get money to grow and feed the band.
The band will not need to steal from the rich anymore.
Getting rid of the sheriff and Prince John quickly.

Cons:
Robin Hood could be accused of Provincial banditry and court intrigue. Prince John had spies everywhere, and he was known for his vindictiveness. If the plan failed the pursuit would be relentless and retributions swift. This is a good plan, because it is the only way to a significant change, momentarily and long-term. The corrupt would be exonerated and Robin Hood would achieve his goals.

What one course of action of the 4 opportunities you analyzed would you recommend to Robin? Be specific about why you chose this and how it helps with the threats/problems you identified in your SWOT analysis. I would join the Barons to raise ransom $$ to buy King Richard’s freedom because the band is getting disorganized, members are beginning to disagree with each other in certain subjects and Robin Hood must to do something to accomplish his goals. If the mission of liberating King Richard was succeed, the sheriff and Prince John would be expelled of their positions and they would no longer be a threat to the band.

Make a list of the top four or five specific action steps (tactics) that he needs to take in order to implement this plan and turn it into action, not just words. If you correctly list the action steps, then if the action steps are all followed, then the plan becomes implemented and goals are accomplished. The band should be restructured, delegating new tasks and invest in training for new recruits. Expand territory in order to seek new resources and capital for the band. Support the Barons and help to raise money to free King Richard. Provide the best archers and the most skilled members of the group to help in the campaign to free King Richard.

Show a new organization chart for Robin Hood and his men, based on whatever new course of action you recommend in question 9. Write each person’s name and what they are responsible for doing. There were not many changes in the organization of the group, because the band should still be careful with the sheriff, many managers will split tasks they had been doing and they need to help Robin Hood with the new plan. 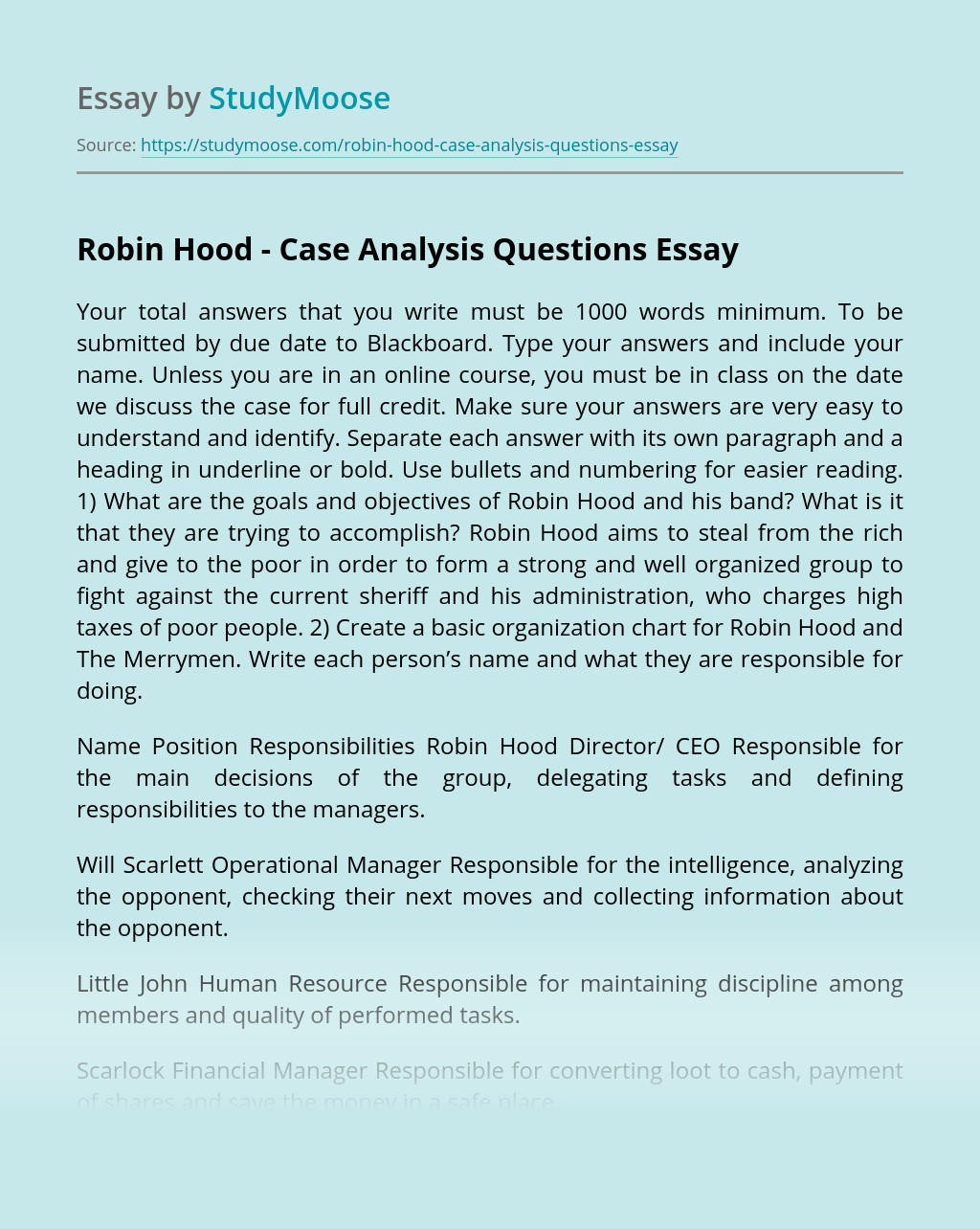 Turn in your highest-quality paper
Get a qualified writer to help you with
“ Robin Hood – Case Analysis Questions ”
Get high-quality paper
Helping students since 2015
Stay Safe, Stay Original