In this essay I will write about Robin Cook´s speech Chicken Tikka Masala. Robin Cook is the former foreign secretary and leader of House of Commons. He passed away in 2005, 59 years old. He gave the speech while he was the foreign secretary. Robin Cock speech very much about how the Britain´s not only comes from England, Wales, Scotland and Northern Ireland. “Tonight I want to celebrate britishness”

That was the first thing Robin Cook said. He wanted to show how the Britain’s is not only comes from the British islands; they come also from Italy, Germany, Netherland and many more.

He thinks that is very important for a country to have good connections to other countries. That will strength the economy, the security of the nation and helps the people against crime. Robin Cook resigned from his post as leader of the House of Commons because Britain did participate in the war against Iraq. He speech about how country have to cooperate together, that is the way to make the world safe.

The receiver of the speech is those people who as arrived and are new I Britain. He speech to them because they have to fell as a part of the British country. Britain should be a country where there is space for everyone, that the way it has been for hundreds of years.

London was established by Romans from Italy, and there were people from Germany and Netherland that lived here. Just like USA and Canada who is also a mixed country.

“The British are not a race, but a gathering of countless different races and communities, the vast majority of which were not indigenous to these islands” Britain was not open for foreigners at they should be according to Robin. There were three threats against. Foreigners that came and wouldn’t be a part of the British identity. Robin tried to be optimistic but it was hard. He describe it like the EU already is only country. He was afraid of being a part of the EU, because it will properly take the British identity away from the Britain’s.

“I Want to go further and argue that in each of the areas where the pessimists identity threat, we should instead see developments that will strengthen and renew British identity” At last it was that Scotland, Wales and Northern Ireland gets more and more power. That is seen like they are just few steps away from break up with the United Kingdom. That will also ruined the British identity. The other countries will there own identity, and that way be self-controlling. “Britain was unusually open to external influence; first trough foreign invasion, then, after Britain achieved naval supremacy, through commerce and imperial expansion. It is not their purity that makes the British unique, but after the sheer pluralism of their ancestry” Britain should not be afraid of losing their identity. The country was build on colonization. It’s a country where no one is real British. They have to be a part of the Vikings, the Germans, the Romans, the Indies and by the colonies they had in Africa.

They have to adjust to fit into the British system. The British is a little part of every of those country who has been a part of building the country up from the start. They all suddenly doesn’t have same religion but, they can some things they can get and share together, like Cricket, that really comes from India. “The modern notion of national identity cannot be based on race and ethnicity, but must be based on shared ideals and aspirations. Some of the most successful countries in the modern world, such as the United States and Canada, are immigrant societies” Britain is a successful, that they can have more than 30 ethnic groups that speaks more than 300 languages, is successful.

They have to find a thing that they can share. Not just one, but many different things. Sports or music, they should find every different culture could “speak” to each other. If that don’t happen they will properly just close themselves up in their own closed community. That will not be good and the will have a hard finding a national British Identity that all can share. “Chicken Tikka Massala is now a true British national dish, not only because it is the most popular, but because it is a perfect illustrations of the way Britain absorbs and adapts external influences” 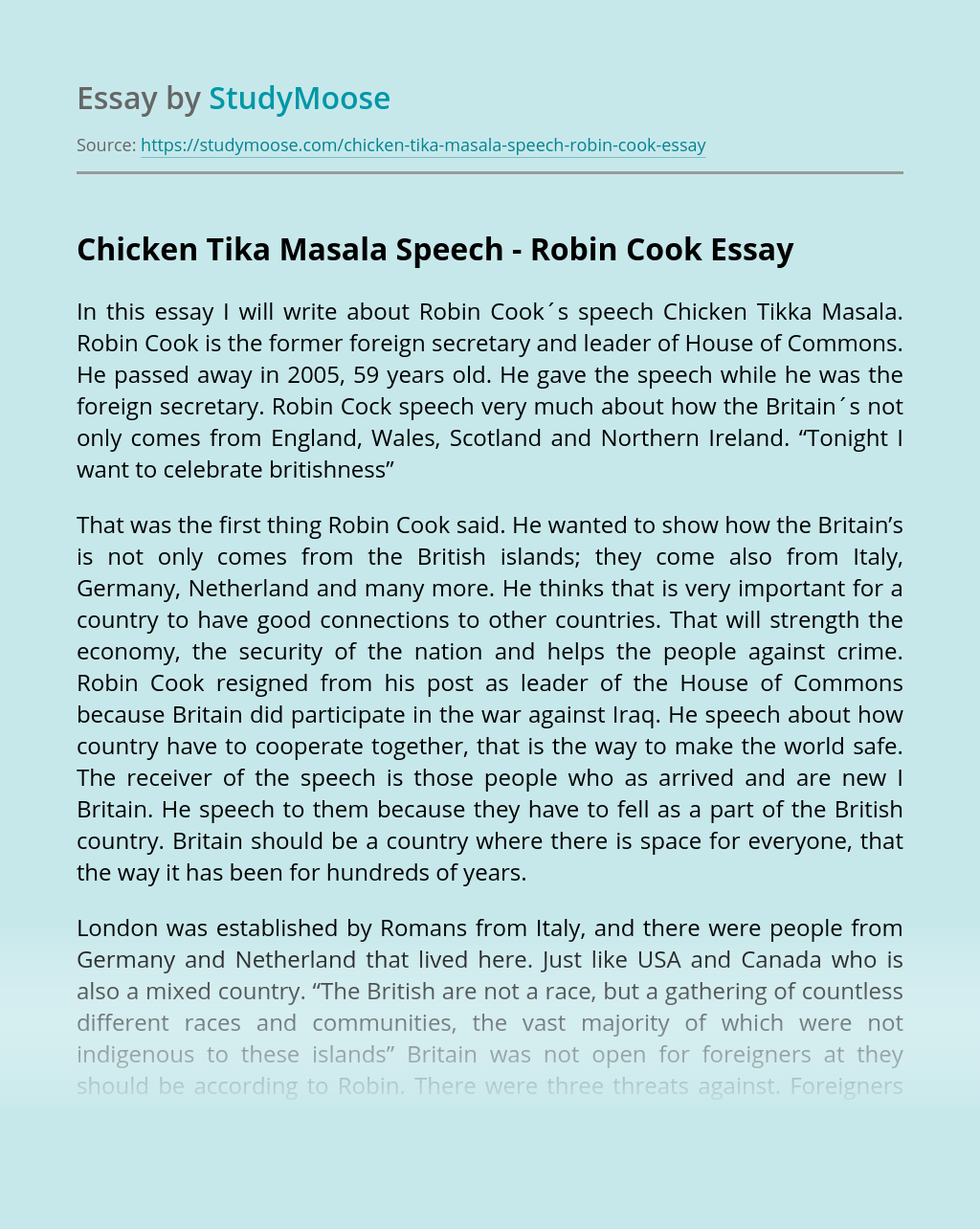