The film Little Miss Sunshine directed by Valerie Farris and Jonathon Dayton tells of the Hoover Family’s emotional and physical journey from New Mexico to Florida for the youngest member, Olive’s beauty pageant competition. The viewing audience is introduced to several characters in the beginning of the film and are able to see their development and change as the film progresses. Richard Hoover is the father of the dysfunctional Hoover family who shows an important change in values and viewpoint of life and people.

Turn in your highest-quality paper
Get a qualified writer to help you with
“ Richard Character analysis ”
Get high-quality paper
NEW! AI matching with writers

He is introduced as a narrow-minded and arrogant character, however as a result of his emotional journey he encounters he is later viewed as a respectable family man after re-evaluating his own perspectives, and priorities in life.

Richard shows the change in thinking and life philosophy, from narrow-minded to accepting of those around him and himself. In the beginning Richard is very concerned about his status, and lives off his definitions of losers and winners.

“There are two types of people in this world, winners and losers.” This shows the extent of his narrow-mindedness as he does not acknowledge or understand that an individual could exhibit traits of both a winner and a loser, and that we should not be defined by a superficial title. The diner scene is a key scene in the beginning of the film that shows Richard’s narrow-mindedness through his black-and-white perspectives about the controversial issue of concern for one’s appearance throughout the pageant society. Richard shows a clear bias towards those thinner through his words of “fat…or nice and skinny.

” He is portrayed as a dislikeable character in the beginning scenes of the film.

However, when faces with the difficulty of Olive’s eccentric character that does not fit in with the strict expectations of competitors in the beauty pageant, Richard accepts that fact although society may not condone or view Olive as the ‘winner’ of the pageant, Olive is still the ‘Little Miss Sunshine’ of their family and ultimately a winner. Through his consistent encouragement and support whilst Olive is performing on stage, we are able to see the newfound acceptance and appreciation he demonstrates. He exhibits the attributes of a supportive and caring father, who is able to accept Olive for who she really is. From this, we see the change of Richard from a narrow-minded and careless character to an accepting and supportive father.

Richard began as a character that was extremely conscious and perhaps uptight about pleasing society and upholding the law, however he develops into a character that is willing to break rules to meet the means of the situation at hand. When faced with a dangerous situation of getting pulled over by a police officer. Richard acts very cautiously, not wanting to displease the officer or raise suspicion for their potential crime. “Everyone pretend to be normal.” is a quote said by Richard, showing his need to please society and ‘acting normal’ when clearly they are a very unique, dysfunctional family of characters far from normal. We see his priority of upholding the standards of society and pleasing people. However, from this we can see his self-consciousness and uptight character displayed in the film. Later as the film progresses, Richard is able to develop into a character that is unafraid to break the rules at times to fulfil an ambition or goal. With the Hoover family running late to the pageant venue, Richard is sent o make the abrupt decision of “I’m not going back!” and potentially puts his family at risk.

He bypasses the chained gateways and parking barriers in order to fit the means of the situation and arrive on time through this shortcut. He is decisive in leading his family to the objective and now willing to bend rules, though he would have been reluctant to do so previously. Through this we are able to see the change in Richard’s behaviour and actions, as he is able to quickly assess the situation, be decisive and less uptight. Another significant change Richard demonstrates is the change in his priorities, where he begins as a selfish man with no regard for those around him including his family. He changes into a father wiling to sacrifice his pride, for the sake of his daughter’s potential happiness. In the beginning scenes of the film, we are able to see Richard’s selfishness as he hastily listens to the family’s voicemail machine recordings and dismisses all information irrelevant to himself. When talking on the phone about a business matter he tells those around him to remain silent for him.

His only shows concern for himself. We are able to see that he doesn’t tend to prioritise family above his personal matters, and displays his selfishness through this action. However, as the film progresses he becomes more selfless and willing to sacrifice his pride to beg for Olive’s chance to compete in the pageant. As he gets down on his knees and begs “You don’t know what we’ve been through.” for a chance, we see the vulnerability and selflessness in Richard which contrasts greatly with his character in the beginning scenes. He changes into a more selfless character, with the newfound sense of what his priorities truly are, as he puts the happiness of Olive before his own pride.

The character of Richard Hoover in Little Miss Sunshine displays a significant change in philosophy, attitude, priorities and behaviour through the contrasting in character in the beginning and end of the film. He is introduced and developed into a dislikeable character due to his selfishness, close-mindedness, uptight and need to please society’s expectations of people. However, he develops and changes into a selfless, accepting father with his family as a higher priority in his life. The happiness he receives and gives to those around him due to his change in perspectives and character show us the importance of discontinuing a life centred around ourselves. He demonstrates the change one goes through in behaviour, thinking, and actions when able to prioritise others before oneself. 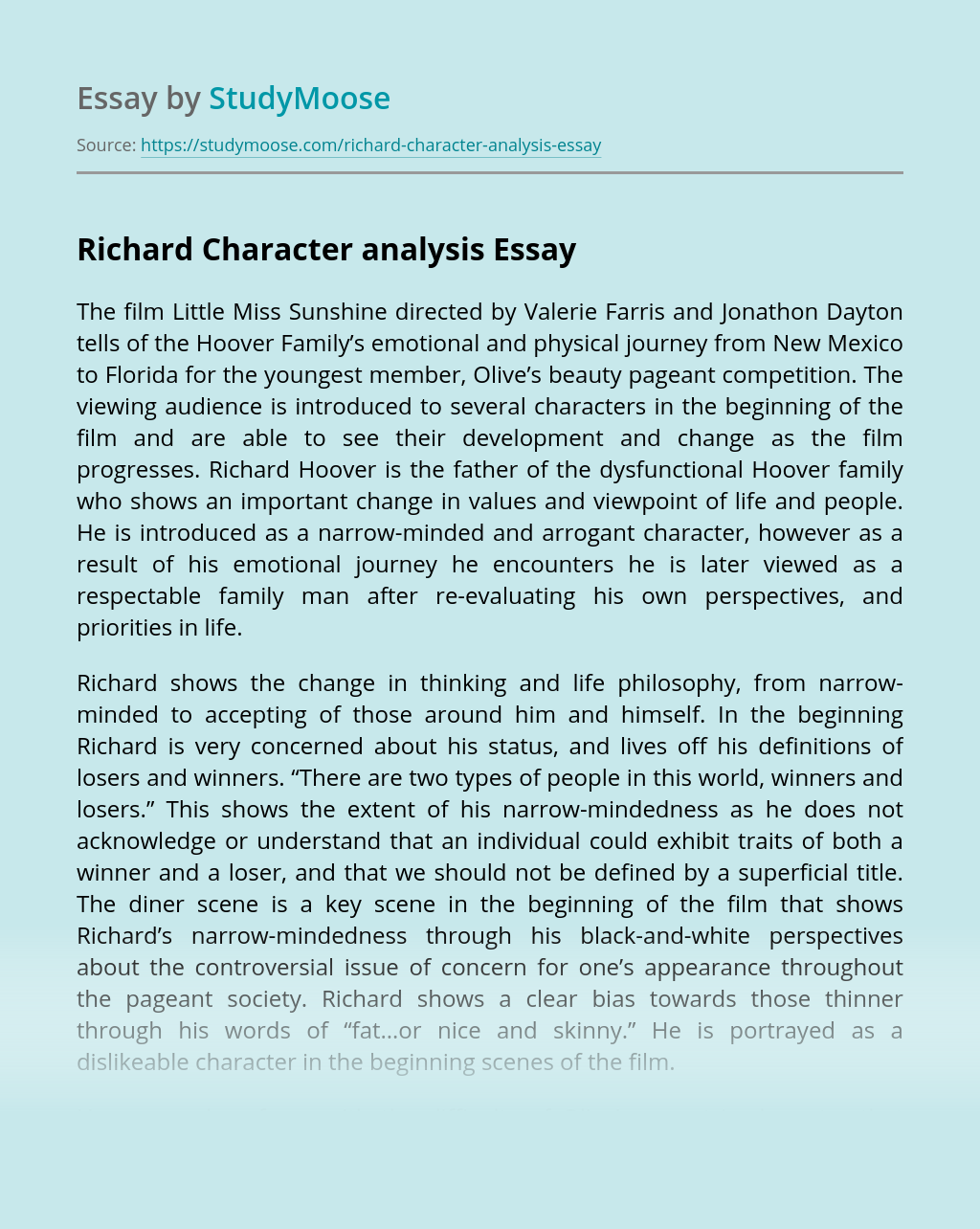 Turn in your highest-quality paper
Get a qualified writer to help you with
“ Richard Character analysis ”
Get high-quality paper
Helping students since 2015
Stay Safe, Stay Original