Rhetorical Analysis of Walter Benn Michaels, "The Trouble with Diversity"

Diversity isn’t something to be ignored, but is that where our primary focus should lie? It is in our very nature to celebrate our differences; without it we lose our identity. As a society we literally dance in the streets to celebrate our individualities. However, Walter Benn Michaels points out a very interesting issue that is not only social but economical as well, in his book The Trouble with Diversity: How We Learned to Love Identity and Ignore Inequality. When we strip away our color, our heritage and begin to look at our wallets we become embarrassed, even shy about our how fat or thin it becomes.

Don't use plagiarized sources. Get your custom essay on
“ Rhetorical Analysis of Walter Benn Michaels, “The Trouble with Diversity” ”
Get custom paper
NEW! smart matching with writer

His political stance is intended for a general audience to: show present concepts of cultural diversity, to illustrate how Americans have come to love race, and to shift the focus from race to economic inequality. The introduction of The Trouble with Diversity is merely a glance at Michael’s agenda and becomes quite confusing to an average reader.

He spends a fair amount of time discussing how we have become engulfed in our, as Michaels puts it, “love affair” with diversity that his primary goals are diluted within the text. When we break it down, his arguments become clearer.

To fully understand Michaels objectives one must take into account his general audience. It becomes clear with his use of the first person narrative, “The argument, in its simplest form, will be that we love race—we love identity—because we don’t love class.

” As Michaels points out the bulk of society is below the poverty line and when discussing economic inequality no one will listen more closely than those who are suffering the most. The upper class will also be able to identify with because as he emphasizes, “Survey after Survey has shown, Americans are very reluctant to identify themselves as belonging to the lower class and even more reluctant to identify themselves as belonging to the upper class.” As a society, we would rather associate ourselves as being middle class. In this way, no matter what the race, we are alike.

Beginning The Trouble with Diversity with F. Scott Fitzgerald famous saying to Ernest Hemingway, “The rich are different from you and me.” Expresses how some people view the upper class as a completely different race of individuals. Hemingway’s witty response, “Yes, they have more money.”

Illustrated to Fitzgerald that there is no difference in the rich, or the poor, except their wallet size; they are still human. Michaels goes on from there to describe how we have come to warship diversity. In Bakke v. Board of Regents, the Supreme Court ruled that it was reasonable for colleges to consider race when accepting applicants, as long as was in the interest of diversity and not to exclude members of certain racial background. Along with racial diversity, diversity became something to describe more than just the color of our skin. It now is used for sexual orientation, medical coding, and religious preferences. Unfortunately, diversity became closely associated with the struggle with racism and ended up with a notion that we should be “a color-blind” society.

As Michael states, “Why do we assume black people want to stop being black; why do we assume the deaf want to hear?” He finishes the intro of his book by illustrating how we have come to hate class. While we have become to love our identity, we have become increasingly uninterested in identifying ourselves based on the classification of income. He even accuses the left wing party (or liberals who have prided itself on working for social equality) in diverting focus of economic inequality.

“Giving the priority to issues like affirmative action and committing itself to the celebration of difference, the intellectual left has responded to the increase in economic inequality by insisting on the importance of cultural identity.” So by his observation Michaels believes that even the liberals are guilty of thinking the solution to inequality is simply to appreciate the lower class. 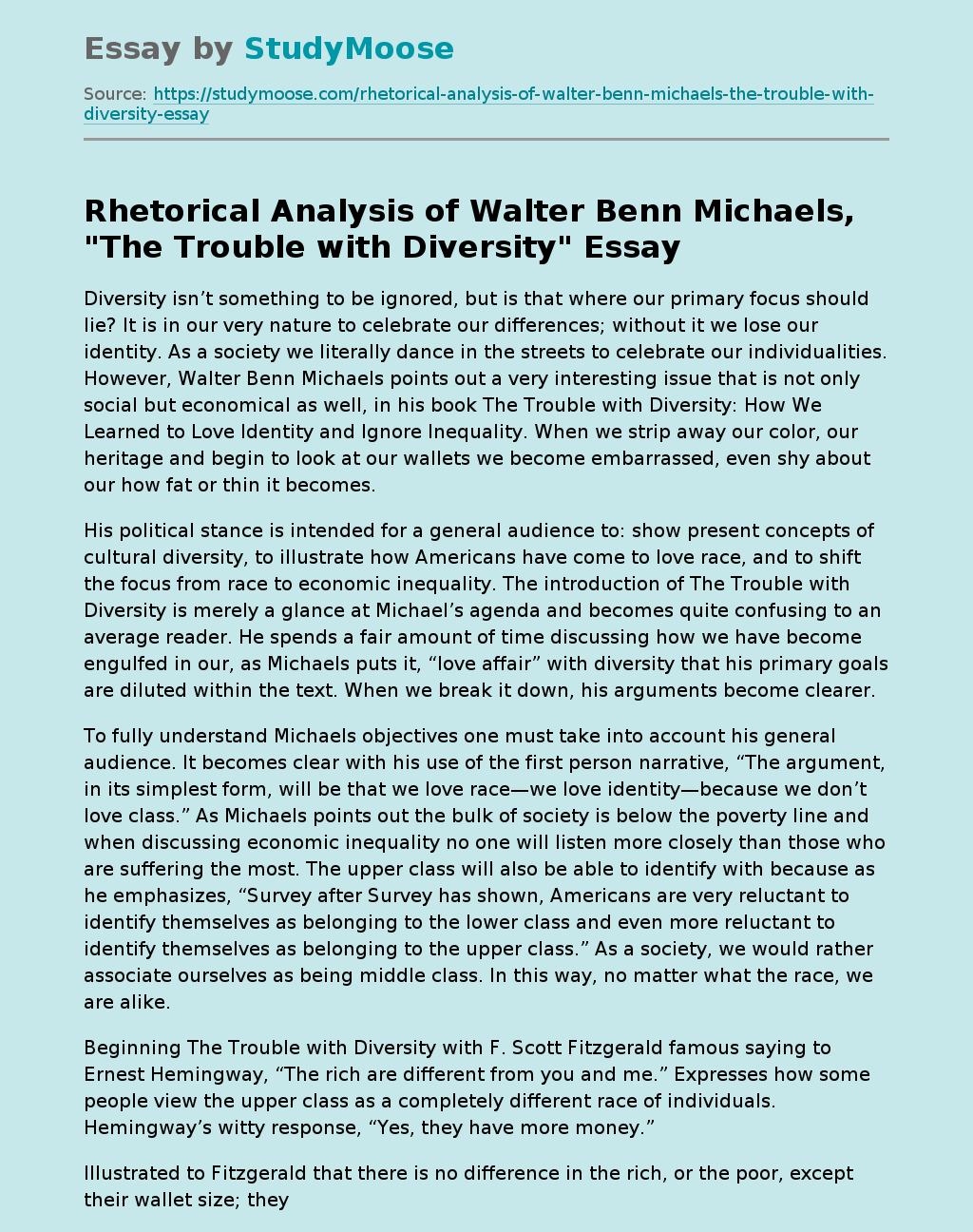