Rhetorical Analysis of The Declaration of Independence

In The Declaration of Independence Thomas Jefferson serves as a representative for the Thirteen Colonies by stating their grievances against King George the III. He elaborates on the complaints by giving his reasons for why it is necessary that the colonies break away from Great Britain and King George’s rule. He states that the king has neglected, restricted, and deprived the colonies of their rights. Jefferson is able to clearly get his message across by using a variety of rhetorical devices, which include allusions, anaphora, details, diction, imagery, and tone.

Don't use plagiarized sources.
Get Your Custom Essay on Rhetorical Analysis of The Declaration of Independence Just from $13,9/Page

He uses these literary devices effectively to help convey his message, although Jefferson’s most effective rhetorical device proves to be his persuasive appeal, meaning ethos, pathos and logos. With these techniques he is able to appeal to the audience’s emotions, ethics, and logic, helping Jefferson to further prove his points valid.

Jefferson has a very formal and professional tone to his wording and overall approach, but he also conveys an enraged tone all at once.

He is very descriptive in his writing and uses a sophisticated tone to help King George understand the seriousness of his message. He constantly displays his intelligence through the use of advanced vocabulary, which enhances his tone. He does not simply state, “the King of Great Britain is a tyrant and we want to be independent”. He uses phrases like, “The history of the present King of Great Britain is a history of repeated injuries and usurpations, all having in direct object the establishment of an absolute tyranny over these States”(Jefferson 238) to show that he is angered by The King’s actions, while still displaying his composure.

Furthermore, Jefferson’s diction is also an important aspect to the message he tries to convey. His unique style of writing allows him to add meaning to his overall message. For example, Jefferson’s quote, “We hold these truths to be self-evident, that all men are created equal” (238), displays that distinct style of his that gives more meaning to his point. The basic meaning of the quote is that no person is more important than the next, but the way Jefferson phrases it makes people believe that it is a fact, rather than his opinion. This supports his claim to King George, that it is only fair for the colonists to be treated as fairly as the people in Great Britain.

The use of imagery also proves to be a useful tool in conveying his tone and message. Jefferson’s use of imagery serves as a guide to create visuals in the readers mind. Moreover, it is important because it helps give the audience an understanding of Jefferson’s surroundings and the state that the colonies were in at the time. In the Declaration of Independence Jefferson blames King George for their wretched conditions and emphasizes their poor state by using imagery shown in the sentence, “He has erected a multitude of new offices, and sent hither swarms of officers to harass our people, and eat out their substance”(239). This example gives a vivid description to further add on to the image of suffering. This was Jefferson’s way of making his case to King George and validating their separation.

Details play a key role in the making of Jefferson’s argument. He uses an abundance of detail to help prove his point. For instance, using the statement, “…long train of abuses and usurpations, pursuing invariably the same evinces a design to reduce them under absolute despotism…” (Jefferson 238) as a starting point to describe the abuses provides the reader with the sense that The King of Britain has been cruel, unfair and abusive. He uses the fact that the King will not approve the necessary laws for the public good. He neglects the needs of the people and makes it impossible for them to get anything approved or changed. He also explains that the King has refused to make it possible for someone else to be elected and take his place. Detail after detail Jefferson is able to show his audience that King George has been abusive and mistreating the colonies.

In The Declaration of Independence Jefferson heavily relies on logos to make his point. He attempts to appeal to King George by using arguments mostly based on logic. For example, he argues that the rights the colonies are being deprived of are actually “endowed (to them) by their Creator” (Jefferson 238). In this quote he uses people’s basic rights as humans as the logical argument.

Jefferson’s Declaration of Independence uses many literary devises. The use of ethos, pathos, and logos being among the most influential to help his argument. Abundant detail usage in the Declaration of Independence helps provide an overall understanding of Jefferson’s message for the reader. Also the use of imagery, diction, tone, and details help to validate his points. His point being that The King of Great Britain was abusive and unfair, which helps persuade the audience that the colonies deserved their independence.

Rhetorical Analysis of The Declaration of Independence. (2016, Aug 12). Retrieved from https://studymoose.com/rhetorical-analysis-of-the-declaration-of-independence-2-essay 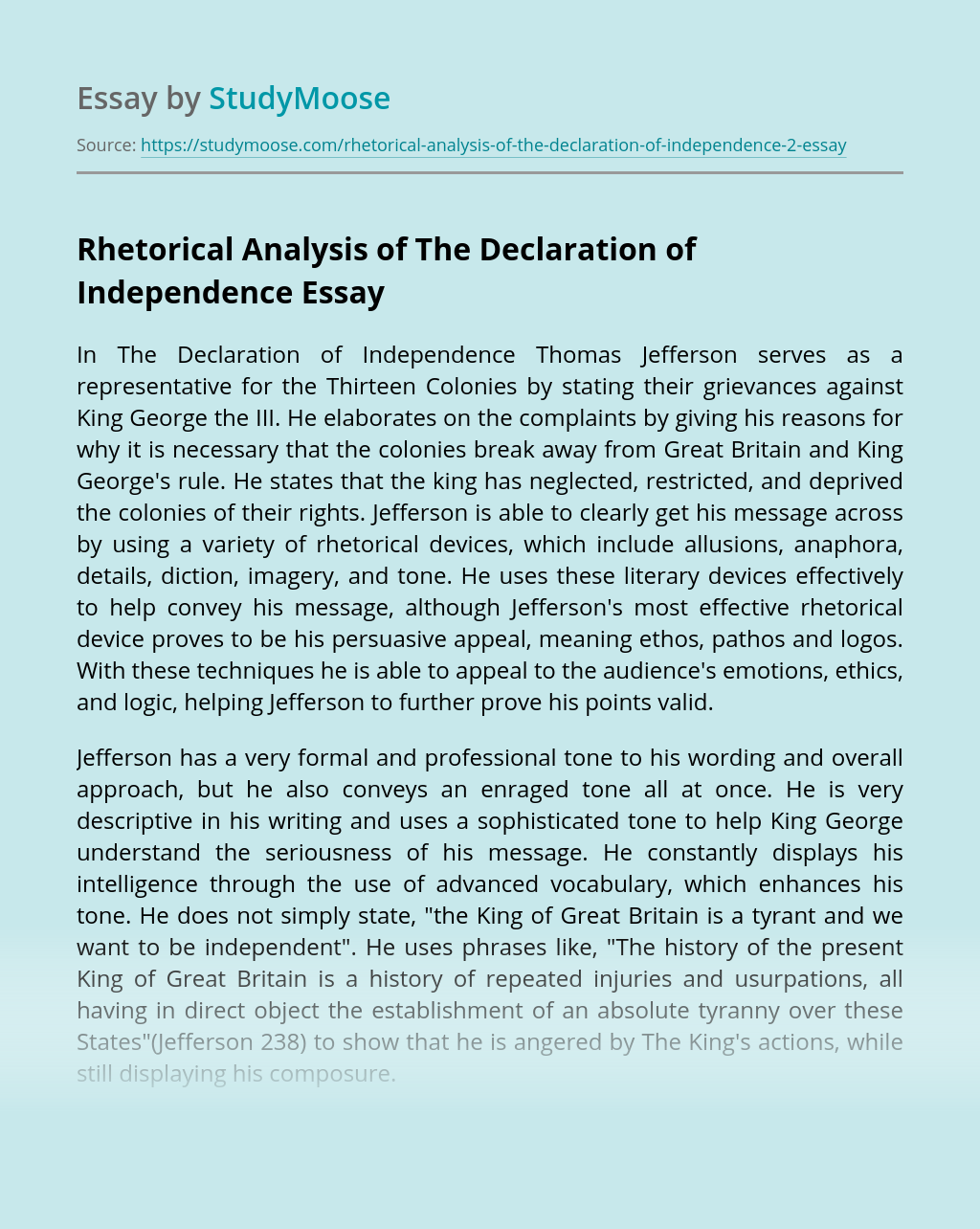 The replacement of dead cells and the repair of worn out tissues, as well as growth, are the results of cell division. Prior to division, the cell must duplicate its DNA in order to give identical DNA to its daughter cells. This process is done through DNA replication which requires transcription and translation processes. During...

The incident on the beach

My friends and I went to the beach. The sun was shinning and the sky was the bluest I had ever seen it. I took my shoes off and felt the soft, warm sand go through my toes. The sand felt like a warm winter’s blanket. The beach was full with families and groups of...

Problem Identification Becton Dickinson a manufacturing company, with operations worldwide, and revenues of over $2.7 billion was founded in 1897, and had ten core businesses organized into two product sectors: medical and diagnostic. Mainly US domestic operation was beginning to give way to expanding international sales, warranting a separate division in Europe. By 1970s, the...

The Third Man, was filmed in post World War II Vienna, releasing in 1949. The film was written by Graham Greene, directed by Carol Reed, and produced by the American David Selznick and the British Michael Korda. The black and white, pessimistic film “is one of the greatest British thrillers of the post-war era, in...

Wise buyer in Era of Sales And Marketing

In any industry there are two parties. The consumer and the seller. The Consumer is the one who is willing to buy products, where the Seller is the party willing to Sell products. The two parties are very different and some times disputes may arise between the two. The following paragraphs will explain A. What...