Respect of Women and Declaration of Sentiments

The Declarations of sentiments was arguably the most significant document in history for the advancement of women in the nineteenth century America. It was made famous at the first Woman’s Rights Convention, held in Seneca Falls, New York, in July of 1848. Drafted by Elizabeth Cady Stanton, the declaration outlined a series of grievances resulting from the unfair treatment of women and proposed eleven resolutions arguing that women had the right to equality in all aspects of their lives, including the right to vote.

Don't use plagiarized sources. Get your custom essay on
“ Respect of Women and Declaration of Sentiments ”
Get custom paper
NEW! smart matching with writer

Despite the declarations significance, however, it would be seventy-two ears later that women finally won the right to vote.

In early societies, women bore children, cared for the home, and helped maintain the family. Males dominated in early society from the time of the earliest written historical records. It was believed that women were naturally weaker and inferior to men. Therefore, in most traditional societies, women generally were at a disadvantage. Women were not allowed to vote, work, get an education, or be involved in the church.

Married women were legally dead in the eyes of the law and had no property rights. Women had to submit to laws when they had no voice in their formation.

In early society, women were robbed of their self-confidence and self respect. The events leading up to the 1848 convention date back to 1840, when Stanton attended the World Anti-Slavery Convention in London and was denied a seat at the convention because she was a woman. She then attended a small social gathering near her home in Seneca Falls, where she laid out her list of grievances about the treatment of women in society.

From this small gathering the convention was then planned and the Declaration of Sentiments was formed. The Declaration proposed reforms in all areas of women’s lives.

Included in the declaration was a list of eighteen injustices endured by women, ranging from the lack of equal educational opportunities and the denial of the right to vote, to the exclusion of public participation in the affairs of the church. It also protested unequal employment opportunities. Stanton read the declaration paragraph by paragraph, and over the two-days of discussion, the Declaration of Sentiments and 12 resolutions received agreement endorsement, one by one, with a few amendments. The only resolution that did not pass unanimously was the call for women’s authorization.

The Seneca Falls convention generated widespread ridicule and even hostility, primarily from religious leaders and the press. An article in the Philadelphia Public Ledger and Daily Transcript (September 1848) opined that, unlike the Seneca Falls women, the women of Philadelphia were “celebrated for discretion, modesty, and unfeigned diffidence” rather than “standing out for woman’s rights. ” After all, the writer reasoned, “A woman is nobody. A wife is everything. A pretty girl is equal to ten thousand men, and a mother is, next to God, all powerful……The ladies of Philadelphia, therefore….. re resolved to maintain their rights as wives, belles, virgins, and mot’

sers, and not as women” (Stanton, Anthony, and Gage, p. 804). Women’s rights conventions were held on a regular basis until the start of the Civil War. Elizabeth Cady Stanton traveled the country lecturing and organizing for the next forty years. Winning the right to vote was the key issue, since the vote would provide the means to accomplish the other reforms. The campaign for woman’s right to vote ran across continuous opposition and took 72 years for the women to win.

During the Women’s Rights Movement, women faced incredible obstacles to win the American civil right to vote, which was later won in 1920. At a time when traditional roles were still very much in place, the declaration caused much controversy. Many people respected the courage and abilities behind the drafting of the document, but were unwilling to abandon conventional mindset. An article in the Onida Whig published soon after the convention described the document as the most shocking and unnatural event ever recorded in history of womanity.

Although it would be many years before women finally won the vote, the 1848 Seneca Falls Convention had set the wheels in motion. Without question, it was Stanton’s Declaration of Sentiments that first politicized the issues that would take center stage in the struggle to attain equality for women. In today’s society, women now are more respected and are accepted to do many jobs. Women of those years effected the women of today by giving them hope and acceptance of their right to decide how they would like to live.

Respect of Women and Declaration of Sentiments. (2017, Jan 19). Retrieved from https://studymoose.com/respect-of-women-and-declaration-of-sentiments-essay 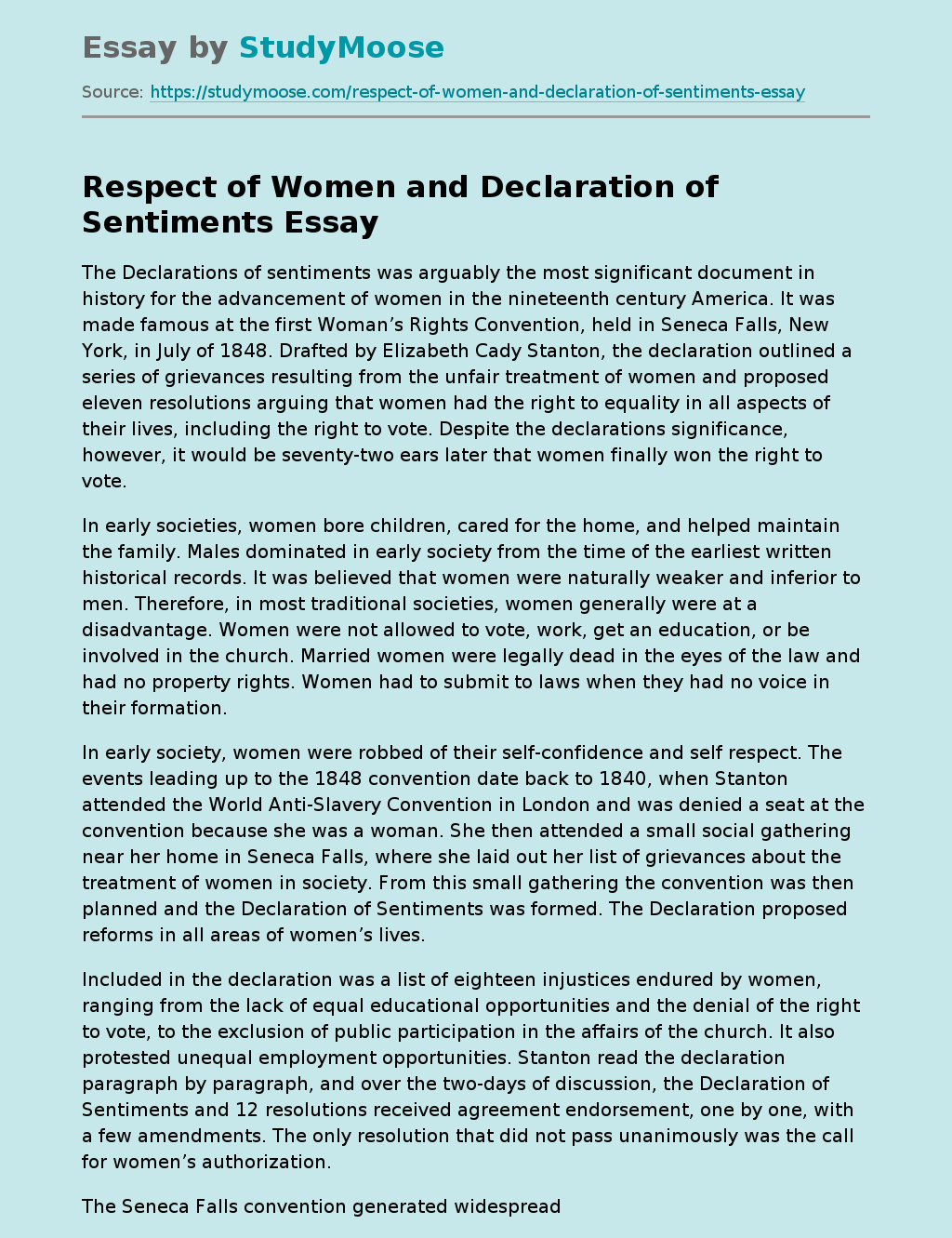