The application of technologies in schools at all levels has proven to yield positive results. There is a variety of technologies that are used in schools today and among them is the use of iPads in learning. In Saudi Arabia, a number of primary schools have adopted the use of iPads and this, as studies have shown, has contributed to improved skills in English. Below is a proposal on the impact of using iPads in the primary schools in Saudi Arabia, taking The 16th Girls Primary School in Zulfi as the case study.

Turn in your highest-quality paper
Get a qualified writer to help you with
“ Research Proposal on English Skills Improvement through the Use of iPad Technology ”
Get high-quality paper
NEW! AI matching with writers

The use of normal computers and laptops have fairly well been established in schools and a considerable body of practical evidences support and confirm the impact and value on learning as at 2014. However, the integration of iPad devices in the schooling system is still at the start level. There are few established researches documenting the impact of these tools on teaching, learning and improvement on English skills.

iPad application’s language has helped students in the 16th Primary School in Zulfi to improve the students’ English speaking, writing and listening. This proposal sets out to investigate, explore and demonstrate the innovative and beneficial practice of IPad applications on learning and improvement of English language skills among students (Cavanaugh, 2007).

Over the past few decades, technology has turned out to be a prerequisite in countless schools at all levels. Its influence has seeped into all facades of life, with the inclusion of English language education.

In contemporary age of teaching English language, media tools such as animation, DVDs, video conferencing, internet and iPads have lessened distance making the globe a small village, thus contributing to trouble-free learning of the subject. According to Brey (2006) “the current generation has an entitlement to get equipped for substantial integration of technology in the learning process.” This statement is supported by the outcomes of a research done on 1,050 pupils of North Essex School in London, aged between 11 to 16 years, which found out that the use of technologies in learning, such as the ipad, was warmly received and improvement on the performance of the pupils’ learning and thinking, was immediately registered (Todorovic et al., 2011). The pupils are able to tackle their personal challenges in learning in ways that fit them best, with the use of technology.

According to research done by Jackson et al., (2006), it was proved that the pupils, who utilize the technology most, attain higher grades and better results. According to Todorovic et al (2011), English educators are obliged to come up with effective practices that are applicable in teaching the subject with the use of technology (Cavanaugh, 2007). The students perform different tasks through the use of technology and thus, their cognitive learning ability is enhanced (Brey, 2006). Owing to this statement, the focus should be on learning through the technology as opposed to learning about it. It is further proposed that, the constant use of hypermedia makes the use of multimedia painless in enhancing language learning and teaching (Jackson et al., 2006). A similar research on the effect of the use of technology in language learning asserted by Cavanaugh (2007) is that “the equipments enhance the retention power of the student as well as the argumentative ability.”

The most helpful broader term used in technology is CMC (Computer Mediated Communication), which permits the verbal communication learner to communicate with other learners through chats, discussion forums, conferencing, e-mails, and text messaging (Jackson et al., 2006). All these activities enhance the learner’s skills in English language. It is, thus, critical that the program be implemented in all primary schools in Saudi Arabia. On the other hand, effective integration of this technology necessitates teachers to obtain familiarity on their use in teaching the substance, pedagogy and the connection of the entirety (Kubey, 2001). According to Ajab Al-Furaydi (2013), the use of these devices will facilitate the delivery of lessons to the learner in limited time and cost. This helps in managing, improving and sustaining the learning and teaching practice, thus assists in assessing and calculating the outcomes of the pupil. As Ahmad (2012) asserts, the use of these devices boost communication, enhances ability to acquire information, give better access to diverse resources of learning, and inspire students to increase challenge solving aptitudes and give support to deeper understanding (Ahmad, 2012). It is true that the technology has changed the language learning process and literacy acquisition and so is the dynamics of the settings of language teaching (Young and Kajder 2003). In latest years, teachers have been searching for techniques in which electronic learning can be engaged to make language learning extra efficient and inspiring for the students (Kubey, 2001). As the research has shown, the use of technology in language teaching and learning empowers the abilities of the students in becoming improved crisis solvers, speakers and communicators (Ajab Al-Furaydi, 2013).

The use of these devices in learning also enhances communicative and linguistic expertise by giving autonomy to the learner during the learning process (Young and Kajder 2003). This is so because the learner is given a chance to enhance the skills without duress or fear. Also, as Ahmad (2012) states, learning through the use of technology promote the sharing of personal experiences among students thus, they are able to learn from each other’s experience. This enhances their perceptions on the learning of the subject at hand which leads to improved performance (Ahmad, 2012).

Owing to the discussion above, it is, therefore, likely that the use of iPads in the 16th Girls Primary School in Zulfi, Saudi Arabia will have a positive impact on the performance of the pupils in English language skills improvement. The impacts on the English language skills are all likely to turn out positive (Todorovic et al.2011).Significance of Research

In Saudi Arabia, most of the primary schools use the customary means of teaching, but currently with all the technological advancements, some primary schools have applied technologies in their education system, such as the use of iPads in learning. The application of this technology has its corresponding impacts on English language skills. It is on the basis of the impacts of the use of iPads on the English language skills that this investigation will be performed (Kubey, 2001).

Based on the structure and statement of the problem, the research questions are created. A thorough investigation will be performed on the following questions in this study (Young & Kajder, 2003).

RQ1: What is the teacher’s believe on the possible improvement of English language skills through the use of iPads?

RQ2: How does the use of iPads in language learning impact on the English skills?

RQ3: What factors contribute to dispositions of advocating the use of iPads in language learning in primary schools?

Some of the considerations which are ethical that the researcher will adhere to are; voluntary participation, non-maleficence, autonomy and confidentiality. The participants of this study will not be coerced to participate neither will they be given bribes to participate. On the other hand, the research will ensure that no harm is experienced by the participants either physically, spiritually or psychologically. They will be left the way they were met before their participation or even better than they were. Similarly, the researcher will uphold confidentiality requirements of the research. Whatever the information given by the respondent will not be shared with another respondent. On the same note, all the names of participants will not be disclosed. Instead, pseudo names will be used in place of their real names (Brey, 2006).Limitation of the Study

The researcher will limit the study to 16th Girls Primary School in Zulfi, Saudi Arabia. This is attributed to the resources available to conduct the research, such as time. The time for the study will be limited to one month. The sample size will include ten teachers for the interview, most of whom are English teachers, and several classes of pupils who the researcher will observe for one month (Brey, 2006).

The sample size of the research may not reflect the whole sample of primary teachers and pupils in schools where the technology is applied, in Saudi Arabia. Each interview will be translated in English by the investigator. The investigator is not eligible as a translator; nevertheless, the scholar will work long hours with the university’s writing center to build up and set down the interrogation as best as possible (Ajab Al-Furaydi, 2013).

Research Proposal on English Skills Improvement through the Use of iPad Technology. (2015, Oct 04). Retrieved from http://studymoose.com/research-proposal-on-english-skills-improvement-through-the-use-of-ipad-technology-essay 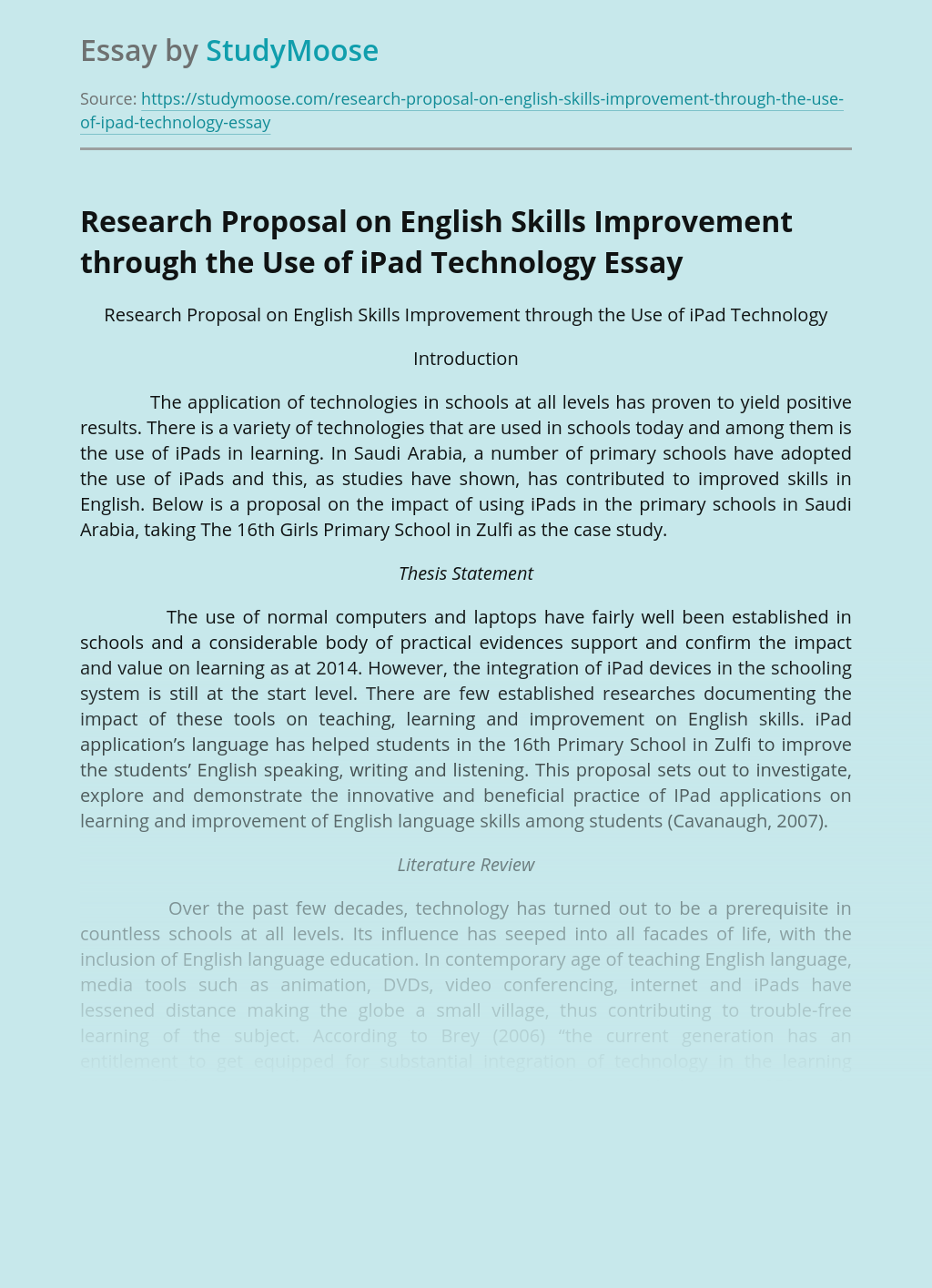 Turn in your highest-quality paper
Get a qualified writer to help you with
“ Research Proposal on English Skills Improvement through the Use of iPad Technology ”
Get high-quality paper
Helping students since 2015
Stay Safe, Stay Original