Examples of Research Proposal on Physical Activity and Environmental Perception

Gender is an important confounder in the epidemiology of physical activity, where men are more physically active than women (Aadahl, Kjaer & Jorgensen, 2007; Azevedo et.al., 2007). Within sport research, the focus on race and religiosity from a social science perspective has for a long time been a marginal research area. The early research on race and sport has been criticised for being ethnocentric (Fleming 1994) with stereotypes like ‘Arabic countries are not interested in sports’ or ‘Muslim girls are constrained by their parents from participating’ and that ‘the level of physical activity among Muslim women is low outside and inside their home’.

Don't use plagiarized sources. Get your custom essay on
“ Examples of Research Proposal on Physical Activity and Environmental Perception ”
Get custom paper
NEW! smart matching with writer

These need further groundwork examination to determine its accuracy. Researchers have explained the low level of participation of women of Asian and North African origin in sports in Europe as a result of both religious and cultural barriers as well as racism and discrimination within sports organisations.

For example, it is often argued that Muslim immigrant girls face gender-specific barriers that limit their leisure-time activities, such as household responsibilities.

Racism as an explanation for the low level of involvement is currently widely accepted among researchers (Carrington and McDonald 2001). Lovell (1991) found that Asian women are often given less attention and discriminated against in physical education because of teachers’ ideas of Asian girls as passive and frail and therefore not interested in sports. Sport participation has scientifically been proven to provide these benefits: lower risk of getting heart disease, stroke, high blood pressure, colon cancer, and diabetes, lower high blood pressure, reduced anxiety and depression and improved mood.

The Purpose of the Study

This research aims to identify the kinds and level of physical activity that Bruneian university students do on their daily routine and association of environmental perception from developing country (Brunei) and developed country (United Kingdom). The study will look into the physical activity engagement of the target group within a period of 7 days.

1. Are the gender differences in physical activity among Bruneian University students studying in the United Kingdom?

2. Are there differences in perception of the environment between male and female among Bruneian university students in the United Kingdom?

This research will be using quantitative methods of data gathering in the form of a survey. Snowball sampling will be used in this research. Approximately 150 Bruneian University students are expected to participate in the survey, consisting of 50% males and 50% females. All Bruneian students must be study in the United Kingdom for at least one year of academic year or two terms (2010/2011). The participants will be volunteers and the age range is from 18 to 59 years old. The participants will be recruited if they show interest in an email sent out from a social networking service (Facebook). The participants will be examined based on their time spent (moderate to vigorous activity) being physically active in the last 7 days, with the data examined through transcription and content analysis as well as environmental perception.

This study will use various self-administered survey questionnaires that are designed to determine the kinds of daily physical activity that Bruneian University students engage in as part of their daily routine, especially within a period 7 days. This study will look into the time spent by respondents sitting as an indicator of sedentary behaviour. In each of the four domains, the number of days per week and time per day spent in both moderate and vigorous activity will be recorded. There are three levels of physical activity proposed to classify respondents – ‘low’, ’moderate’, and ‘high’. Another set of questionnaire will be focus on their environmental perception on the environmental factor from Brunei to United Kingdom. The data needed will be derived from direct surveys, opinion or Internet surveys and literature review

The physical activity data from the questionnaire will be transformed into energy expenditure estimates as MET. To calculate the weekly physical activity (MET-h week-1), the number of hours dedicated to each activity class will be multiplied by the speciﬁc-MET score for that activity and statistically analysed. This will be used to find significant relationships between and among the data gathered. The data will be analyzed using PASW Statistics 18 (SPSS). The correlation between physical activity level and environmental perception will be analyzed. 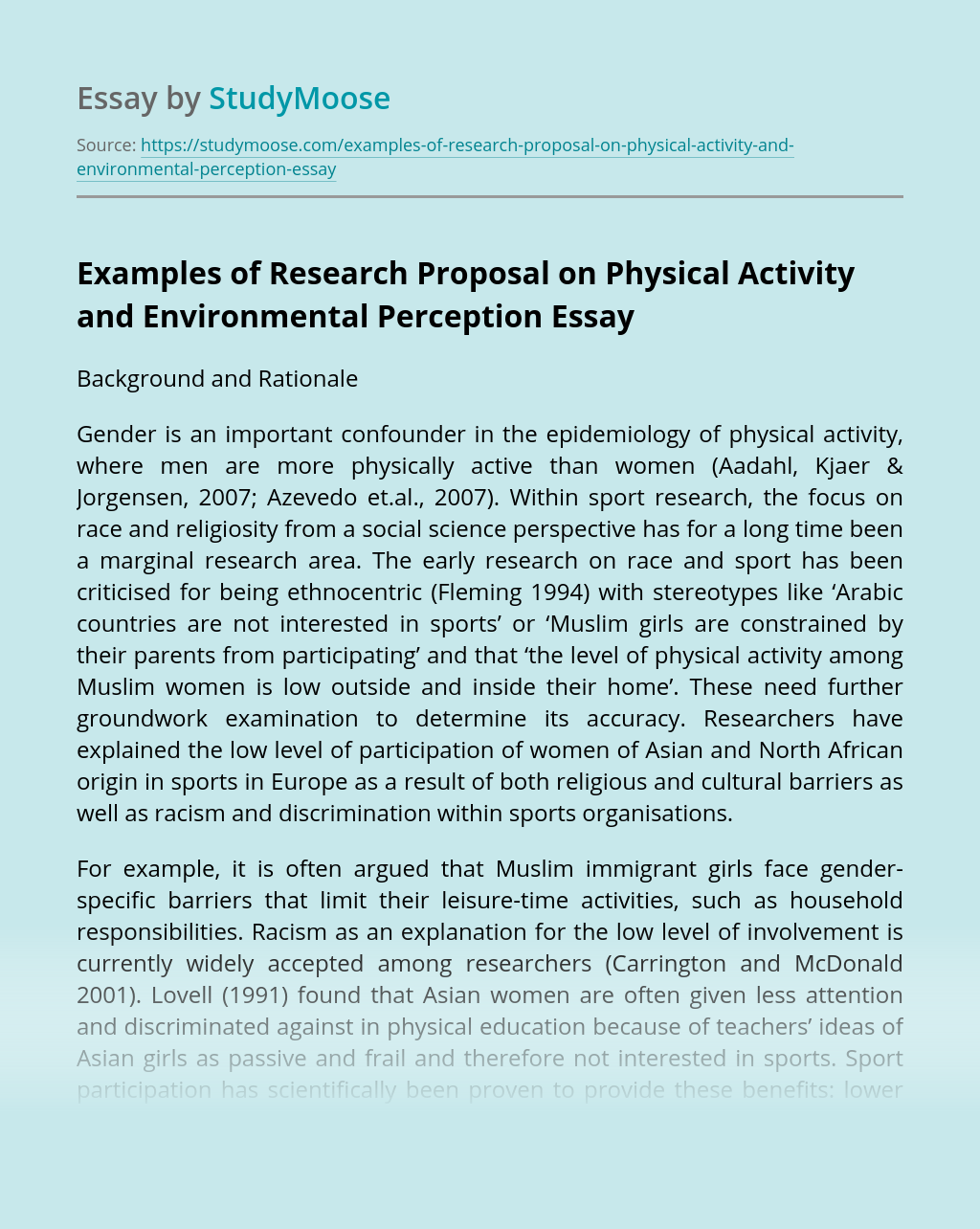