Religion should have an impact on everyone’s life. According to Karen Armstrong, without religion, people would not be able to discover their own personal reason of life with a pure reason or purpose set by any guidelines. As a result of obtaining a good foundation of faith in your religion, it will not only positively affect your life on a personal level, but the community as a whole. If we look back at human antiquity, we commonly find that people of many different religions, traditions, and cultures had one main goal of finding the meaning of peace and purity in their own “selves”.

Turn in your highest-quality paper
Get a qualified writer to help you with
“ Religion: Meaning of Life and Karen Armstrong ”
Get high-quality paper
NEW! AI matching with writer

In the seventeenth century BCE, the Hindus created a book of philosophical texts called the Upanishads, holding the main idea of finding ones sacred self, or atman. This sacred book led tranquility and serenity into the everyday lives of many Hindus. According to Armstrong, the purpose of religion has been and always should be to help us live peacefully, creatively, and even joyously.

Armstrong also states that by engaging in religious practices and forms of life, people can live their lives on a higher divine plane and thus discover their own true selves.

Karen Armstrong believes that religion does help people to find beneficial meanings in their lives and does allow people discover their inner selves. Throughout the passage “Homo Religiosus” written by Karen Armstrong, there are many historical events coming from various cultural and religious backgrounds that support her belief in which religion does and should play a crucial part in everyone’s lives.

However, not only does religion bring harmony and principle in people’s lives, but religion also aids people in finding a legitimate meaning in their life and in the world.

It helps to positively strengthen the relationship between the people leading to the elimination of greed, hatred, and pride in communities. Like Confucius beliefs, the Buddhists had a state of peace of their own. Nirvana was the natural result of a life lived according to the doctrine of Buddha’s anatta. Anatta required Buddhists to live as if though the self did not exist, which led to corruption fading away. It is stated, “His (a monk’s) greed fades away, and once his cravings disappear, he experiences the release of the mind” (Miller and Spellmeyer 37).

This text states that when the people heard about annata, their hearts were occupied with joy and they immediately experienced Nirvana. As a result, people were living between each other with love, care, and ease towards one another which led to a better life style overall. The famous Confucius practice Golden Rule is also another example of religion brining peaceful meanings in ones life. Confucius, the most famous religious icon in Chinese history, clarifies the meaning behind the Golden Rule. The Golden Rule states that an individual should treat another the same way he/she would like to be treated by others.

Confucius would later explain that the practice of the Golden Rule would bring people into a state of ren, which is a state of compassion and love. Although ren did bring peace and love between the people of Confucius, it is stated that it was so hard to entirely be in this state. It was stated that people had a hard time achieving a full state of ren. Nonetheless, people desired being in this pure state. Yan Hui, Confucius’s greatest student, said with a deep sigh, Yan Hui stated, “The more I strain my gaze towards it, the higher it soars.

The deeper I bore down into it, the harder it becomes. I see it in front, but suddenly it is behind. Step by step, the Master skillfully lures one on. He has broadened me with culture, restrained me with ritual. Even if I wanted to stop, I could not. Just when I felt that I have exhausted every resource, something seems to rise up, standing over me sharp and clear. Yet though I long to pursue it, I can find no way of getting it all” (Miller and Spellmeyer 38). This passage explains how hard people were trying to obtain this state.

Religion as defined by the mentors of great countries like India, China, and the Middle East was not something impossible, yet it was a realistic one. It was not about believing in a God or believing in a divine being. Religion was based on physical activities, disciplined work, and robust undertakings on a daily basis. Back then, religion had its real meaning of organizing ones life and basing ones life on religion. Sadly, religion has its own different inappropriate meaning nowadays.

Which leads to my point of Karen Armstrong talking about how many people find the concept of God and religion so troublesome simply because they have lost sight of this important understanding. She also explains how for each separate religion, there is an ontological approach to understanding it. Many people have simply just given up on God because of self-corruption like greed, stubbornness, and impatience. In Greek mythology, it is stated, “ No god can survive unless he or she is actualized by the practical activity of ritual, and people often turn against gods who fail to deliver.

The rites and practices that that once made him a persuasive symbol of the sacred are no longer effective, and people have stopped participating in them. He has therefore become otiosus, an etiolated reality who for all intents and purposes has indeed died or gone away” (Miller and Spellmeyer 31). If God does not comply the peoples needs, then they will turn against this god and he/she will no longer be effective. In the passage, it is also explains how religion requires a disciplined cultivation of a different mode of consciousness.

This basically means that before you perform any religious task, you must pursue ekstasis, which literally means stepping out the norm you are accustomed to. Unfortunately, nowadays people are either to lazy or lost desire to seek any religious salvation simply because many things have taking over our world like media, entertainment, sports, music etc. They pursue other means to stand outside the norm. It is like they almost feel free when they are listening to the type of music they desire, or play the type of sport they seek, or are entertained by media that they desire.

Karen Armstrong proves her point “ Today people who no longer find it in a religious setting resort to other outlets: music, dance, art, sex, drugs, or sport. We make a point of seeking out these experiences that touch us deep within and lift us momentarily beyond ourselves. At such times, we feel that we inhabit our humanity more fully than usual and experience an enhancement of being” (Miller and Spellmeyer 27) In conclusion, Armstrong strongly anchors her belief of religion having a positive influential affect on people’s lives, helping them find a purpose in their life, and aiding them in discovering their true selves.

She has her belief backed up by many famous religious icons from different backgrounds like Buddha, Confucius, and even Greek mythology. She explained how it helps organize people’s lives, better the relationship between two people and last but not least, it helps purify a person’s whole entire life. Reassuringly, religion, does quite in fact, impacts the lives of many. Works Cited 1)Miller, Richard E. , and Kurt Spellmeyer. “Homo Religiosus. ” The New humanities reader. 4th ed. Boston, Massachusetts: Lyn Uhl, 2009. 38. Print. 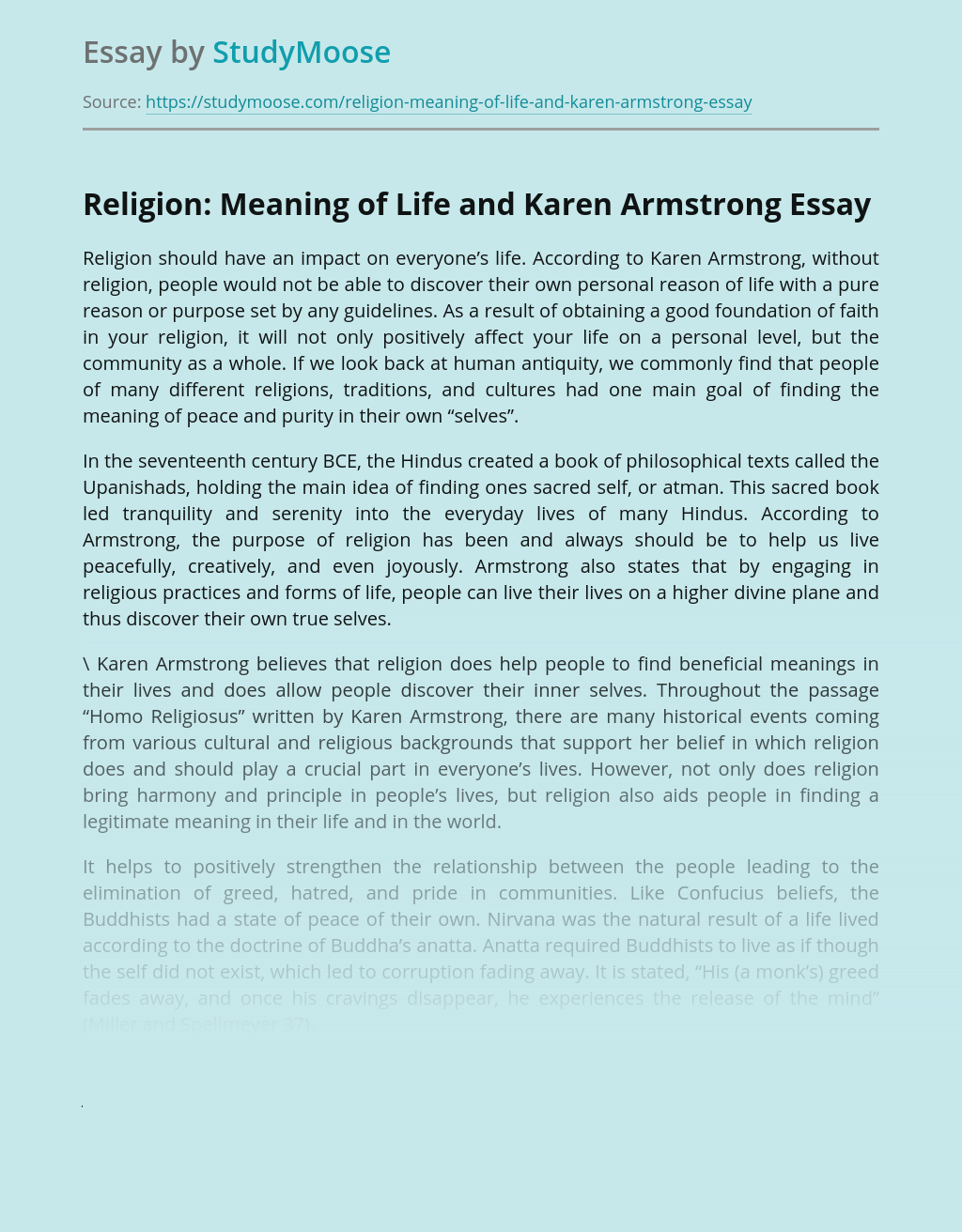 Turn in your highest-quality paper
Get a qualified writer to help you with
“ Religion: Meaning of Life and Karen Armstrong ”
Get high-quality paper
Helping students since 2015
Stay Safe, Stay Original