Before going to the transgender workshop, I have already had a mindset of gender stereotype and I have never thought of accepting the sexual minorities like trans and homosexual people. I was raised in a traditional and conservative family that my parents showed me that a man should be the head of the family because he is the breadwinner so all family members have to rely on him. On the other hand, a woman should always listen to her husband and stay at home to serve her husband and take care of the children.

Don't use plagiarized sources. Get your custom essay on
“ Reflections on Transgender ”
Get custom paper
NEW! smart matching with writer

Family is the primary socializing agent that I learn how a family functions by observational learning. Moreover, I was taught in school that how girls and boys should behave without questioning the reason why I should behave like that. The formal, informal and hidden curriculum in school shaped my thought about gender. For instance, boys should be active and girls should be quiet in class. Socialized by family and school for a long time, I internalized the gender stereotype made by the culture of society so I admitted that I had a closed-mind before.

I now understand why students are inculcated with this kind of gender stereotype. It is because capitalists want to maintain their power and heterosexual domination in a patriarchy society so they labeled the minority as abnormal. According to the conflict theory of Karl Marx, the education systems produce the ideology of gender stereotype so as to maintain and legitimate the base created by capitalists who control the means of production.

I have learned to think in a critical manner because many of our mindsets are shaped by society. We have to question whether they are rational before accepting those thoughts. After attending the transgender workshop, I had a brief understanding about what transgender is. Transgender means that people identify themselves as another sex different from their biological sex. Their gender identity and gender expression are different from their biological sex and gender role constructed by society. For example, some of them are male at birth but they identify themselves as female. We called them MtF (male to female) and another type is called FtM (female to male). Mainly, trans people are divided into two groups, the Crossdresser, who like to dress up as a different sex and the Transexual, who have undergone sex reassignment surgery.

From the sharing of two trans people, Fei (a MtF) and Siu Keung(a FtM), I know that being a trans person is tough because he or she has to face a lot of difficulty in daily life such as being questioned by family and friends as well as being discriminated against in society that make them have low self-esteem. Like Fei, he discovered that he liked a boy when he was in Form 3 or 4 and then his classmates humiliated him so he hated himself very much at that time and he even tried to commit suicide. I can see that peer is another socializing agent that affects our mindset of who we are and what we are supposed to behave. If we violate the expected behavior of society, we will be regarded as freak and abnormal. In order not to be isolated or labeled as abnormal, we follow the main stream and hide the side that what we actually are. Also, I can see that only the hegemonic masculinity is being accepted among people through Fei’s experience. He was once invited to a themed party and he wore a dress to go to the party. However, his friends asked him not to wear dress to come again.

Feminine masculinity is not acceptable. Everything has its diversity but people tend to divide things into binary opposition. The one who owns power decides which character is the “right” and normal one and the other is regarded as “wrong” and abnormal. It is obviously a power struggle. Trans gender people are leading a difficult life. In Hong Kong, there are approximately 200-300 trans people (Leung, 2012). Many of them are like Fei that they have to behave “normal” in front of other people and they could only be the true self when they are alone. Trans people will also consider their behaviors as abnormal or even consider themselves as a psychopathy. As many of them are reluctant to find help, they are in lack of people to share their feelings that make them feel lonely and helpless. Some of them many even hurt their reproductive organs or commit suicide. Apart from the lacking in mental support, the institution in Hong Kong doesn’t provide enough support for trans people. Until now, there is no law to protect trans people, as they are not included in the Sex Discrimination Ordinance.

Only those who are judged to have Gender Identity Disorder can be protected under Disability Discrimination Ordinance. (Leung, 2012) Yet, in the mean time, trans people are labeled as disable as well as having mental disorder, which is another kind of discrimination. Also, health care system in Hong Kong is not comprehensive enough for trans people. At present, there are only two hospitals, which are Prince of Wales Hospital and the sex clinic in Castle Peak Hospital, that provide transgender medical diagnostic services so trans people have to wait about seven weeks to see the doctor (Medical services provided for Gender Identity Disorders patients, 2013). Knowing what tough situation that the trans people are facing, I feel sympathy for them and I will now show my respect to trans people. I used to think that the Crossdresser was abnormal and disgusting. Now, I question why women can dress like men but men cannot dress like women. It is unfair to men that they will be criticized and discriminated against if they dress like women. Also, the media uses language to derogate the Crossdresser such as calling them ladyboy “人妖“.

Like Fei, he likes wearing dress since he was small but he has tried to throw away all his dresses as his mother and girlfriends did not accept that. It is hard for him not to be the one he wanted to be and he had spent years being the one he hated. I will consider crossdressing as a hobby of trans people because they just spend time on something they like to do. Also, we should not criticize their act because it does not do any harm on other people. In addition to the Crossdresser, transsexual people have to master up their courage to undergo sex reassignment surgery as it is not as easy as we think. In fact, it is a long process. They have to first get a referral letter from doctors, social workers or psychologists and they must pass the two-year mental and psychological evaluation process including living as another sex for one year. Next, they can be defined as gender identity disorder. After that, they are referred to public hospital to undergo surgery.

In fact it is dangerous for them to undergo sex reassignment surgery, especially the FtM people. There is a high risk of injury in penile reconstructive surgery and the success rate is low. Also, they have to take hormones. According to some medical studies, there will be some long-term side effects of taking female hormones. For example, the risk of having breast cancer will be higher and the load of the liver will be increased (Transgender handbook, 2012). I appreciate their determination that they would rather sacrifice their health in order to be their true selves. As Goffman said, gender is something that an individual actively do, we can choose to be a man or a woman, as we like. In this post-modern age, queer theory suggested that gender is fluid. A picture of the genderbread person shows that there are more than eighty combinations that an individual can be. For example, she can be a female but identifying herself as a man and she can express herself as androgynous and being a bisexual. I know that when we do not understand an issue clearly, we have no right to criticize it.

After knowing what transgender is, I choose to respect. We should be open-minded to accept the existence of diversity of gender in society or at least we should respect so that we all can live in a society with harmony. I have a friend who is a bisexual. I was once reluctant to befriend him. But now, I always show him my support and I am willing to listen to his difficulties in daily life to help him release stress. Also, I realized that I do not need to do something to fulfill what society expects me to do as a girl. For example, I do not need to be tender; I do not need to have long legs, big breasts or a slim body to impress men. I just have to be myself, which is unique.

Reflections on Transgender. (2021, May 19). Retrieved from https://studymoose.com/reflections-on-transgender-essay 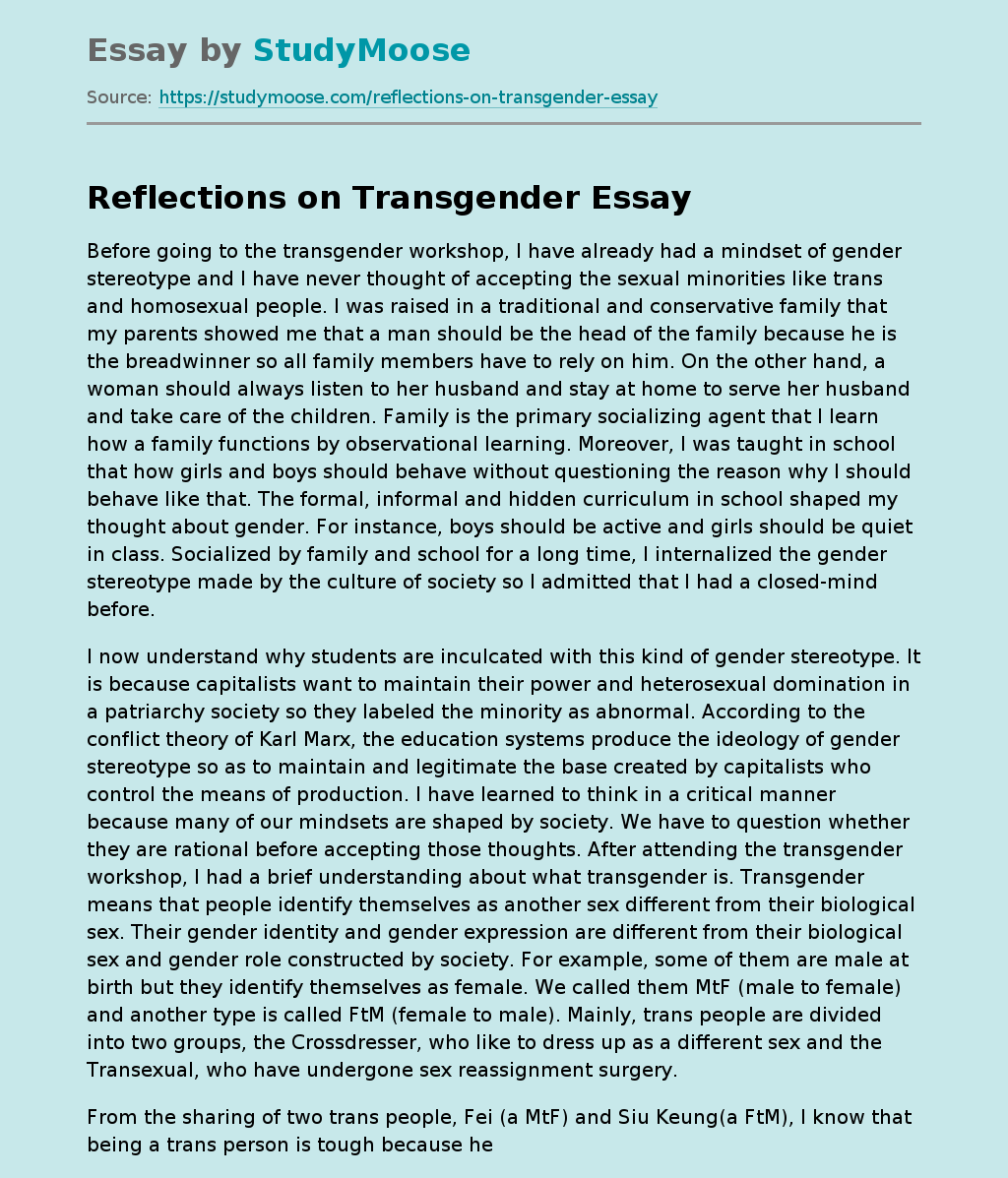