Problems for transgender at job sectors

The word “Transgender” marked to Bangladesh as “Hijrra”, but transgender is used for also lesbian, gay, homosexuality, cross gender or change sex through reassignment surgery (SRS). Bangladeshi society creates different society or community to live for them. They got separate from the family and society after revealed their gender identification. Transgender are used to be unemployed in our society, but in recent years their participation is slowly increased.

The reason behind their unemployment is lack of educational institution let them admit and continuew to take higher degree.

Don't use plagiarized sources. Get your custom essay on
“ Problems for transgender at job sectors ”
Get custom paper
NEW! smart matching with writer

They were used to dance or singing a song at public road, take money by force for their earning source. Usually no one wants to give them any job or work as men and women, at their house or organization, because they are marked as third gender. From Bangladesh perspective transgender refers to “Hijra” though SRS and homosexuality is also known but not common to us. Hijras are dressed as women though they don’t have any children and either they don’t try to pass as ordinary women or as men, rather they are deviant as women as they are as men.

When they born at family all off the member accept them happily, but the problem is raised after the revealing of their sex and the final step is given them to take away from the society, and they addressed by the “hijra” community. Most of the cases parents don’t want to destroy other child’s future, career and marriage.

From their early childhood to death stage they have to spend their life here. In few cases they live with their family with lots of regency. Their education path is not smooth, most of the time they are forcefully dropped. For this inconveniences intellectual job is not suitable for them for lack of qualification, though job sector don’t want to give them any vacancies.

They collect money from the market place and blessing a new born child by dancing and singing for earning though they are often refused. ( khan, S.I. et al. (2009). Living on the Extreme Margin: Social Exclusion of the Transgender Population (Hijra) in Bangladesh. 445-446). Lack of government steps and educational institution diverted them to be a rude and now they are known as a dangerous person to all. Some NGOS and government takes policy to make them employed. This innovation is really thankful, but the environment of working area of transgender is not still safe. Harassment by verbally, sexually, intellectually, socially, politically and sometimes by traffic police is practicing for humiliate them.

Media, ad agency, private business sector, and public business sector can play a very important role to create a work place for them. From my research my main target is finding out social and working sector problems of Hijra’s , including some of the homosexual and SRS cases and relating with sociological theory. Some objectives that will be defined is:

To complete my research I collect all information and data by secondary sources like- Online newspaper, magazine, portal, article, books “Interview from Hijra”, try to expose their demand and own words what they want to say and want from our society.

To analyze the issue of job sector for transgender or hijra I want to bring some literature theory from sociology to more understand.

My main focus is transgender in Bangladesh. I describe it previously that transgender women in our country lead their life very miserably through dancing, singing and collecting money form people in different ways. Sexuality is seen as more fluid in many Asian and Pacific Island cultures than in the West (Sanders, 2005). According to the Department of Social Welfare survey, the total number of transgender people in Bangladesh is around 9,285. (Anonymous, 2018). Though Hijras traditionally earned their living by singing and dancing, many now supplement their earnings by begging or selling sex (Nag, 2005).

One transgender explain herself that they did not get job normally, but there are few chances to be employed and the main problem comes at their workplaces by leader or colleagues. Chaity said that, “I wanted to lead a normal life as a trans woman a life with mental peace. I was not transgender by birth, and I did not like the strategies members of that community were using to raise money. So, I realized it was neither a good choice, nor a good life” (Antara, N.F. 2018, September 16)

To discuss about the unemployment issue or less opportunity of transgender I would want to give some data of them. I collected these data from online sources that Bd government takes some steps for them like. In the 2012-2013 fiscal years, a rehabilitation program was launched in 7 districts of the country that include Dhaka, Chittagong, Bogra, Dinajpur, Patuakhali, Sylhet and Khulna to allocated BDT 7,217,000 and 135 Hijra student received stipend and 350 Hijras who are 18 above got training to improve their skills (Anonymous, 2018).

Chaity as first transgender women employee at Bangladesh national human rights commission describes her challenges was not easy. She comes from Rajbari district; struggle to cope up with Dhaka. She was raised up at her family, later moved on with hijras community. She said that, I was the only male child of the family, and thus my parents were not ready to accept these changes. Their attitude towards me changed, and they kept trying to demoralize me. When the pressure became overwhelming, I left my home for the first time to look for people like me in the transgender community where I would feel safe and accepted, (Antara, N.F. 2018, September 16). After moving from house she wanted to be independent like normal women and started working for it, she took her diploma degree and tried to apply for job. Then she became an employee of a NGO.

Another story is about Ananya Banik, she lived with her family within 16 years, but when she lost her support (parents) she started to live with hijras community. Fortunately she was good at Indian dance and Bengali folk songs, so she got offered from national Tv to show their life (Antara, N.F. 2018, September 16).

Undoubtedly this tow story showed the successful employment of hijras, but this is not the most of the hijras story. When they got educated or skilled by dancing or singing then they are able to do something, but this is not easy for all. Not every school, university tolerates hijras to continue study. Without help from family, educational institution government steps is not possible to recover all hijras. Bd jobs- government, private create their form to marked candidate sex, male or female, they don’t give the listed the third gender. Some reality shows, tv shows, ad agency give small role to play for hijras just for complete their shows temporary basis, this is not considered as for long. Many of us from society make hijras as sex worker or abuse them.

Government initiative steps reducing unemployment rate of hijras but this is not like other women. Sometimes hijras getting work, but it is for third party advantages or mock them. Few cases are given where hijras got working place like others, it is really acceptable. It could be increases for future. Still they are live in slum and subsist on odd jobs (Hossain, A. (2016 January 4). Increasing the intellectual job sector for hijra could be one solution. One article published this attempt- The ICT Ministry is planning to provide IT training to members of the transgender community, four years afters the government recognised the “hijras” as a separate gender and granted them constitutional rights (Halim, H.A., 2017, November,30).

Government already started the project to give them accommodation at Dinajpur district, though it is make them happy, but not everyone are taking this advantages. Also I think separate them from the civil society makes them to fell they are special or apart from women and men, which may be occur future conflicts between civil society wit hijras. They are not apart from us, culture reconstruction made us apart from them. Before the colonialism every society was experienced by transgender.

From my point of view there can be few more steps or policy can be taken by Bangladesh government. Like:

Problems for transgender at job sectors. (2020, Dec 04). Retrieved from https://studymoose.com/problems-for-transgender-at-job-sectors-example-essay 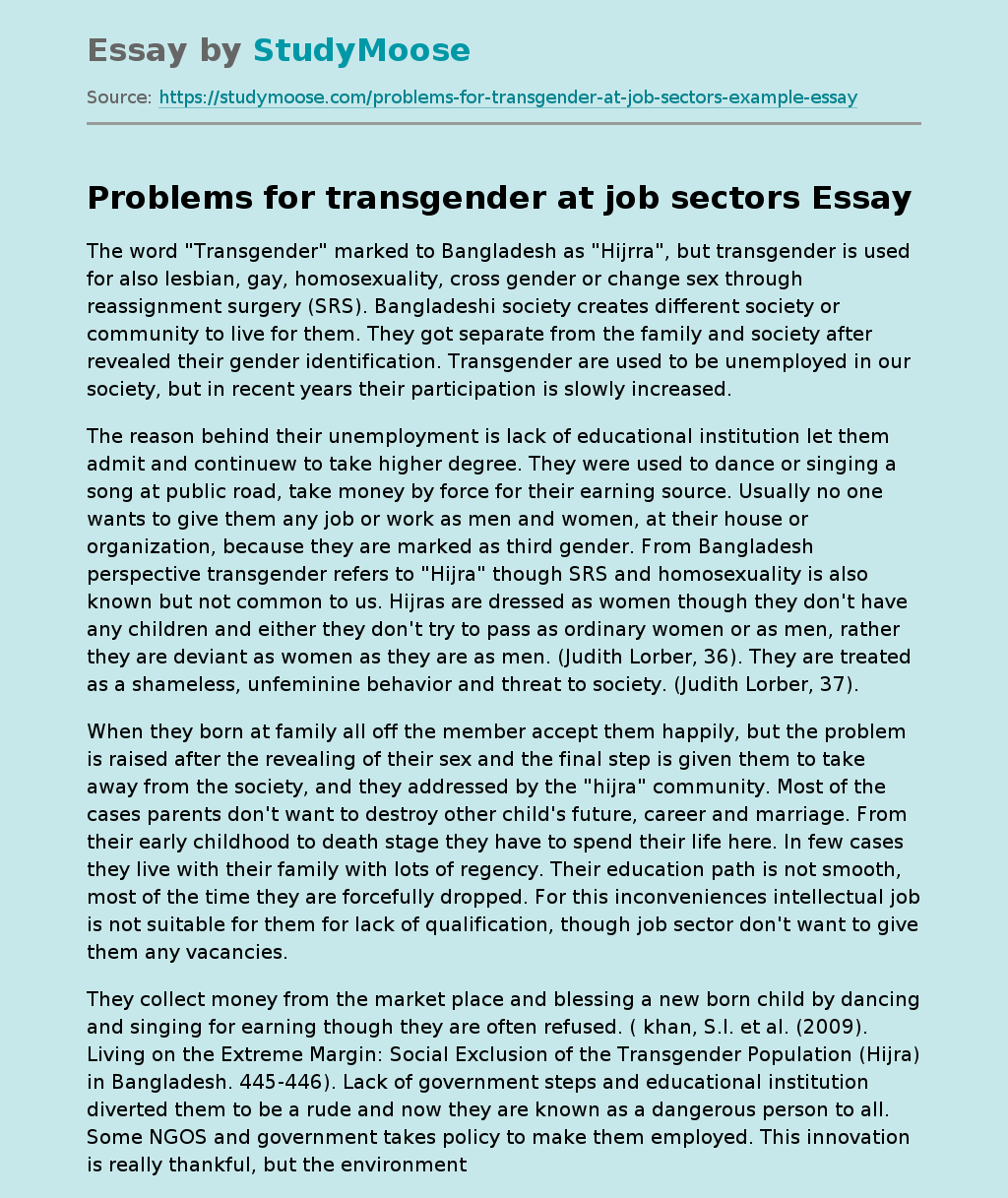