It is important because HRM helps the company to achieve the goals and improve employee’s performance. One of the HRM roles is to have an impact on the management performance of job design and work force diversity. Due to the definition of job design, it helps to defining how work will be performed and what impact will be given in performance.

Don't use plagiarized sources. Get your custom essay on
“ Job Design and Work Diversity ”
Get custom paper
NEW! smart matching with writer

On the other hand, work force diversity also has impact on HRM to managing people’s similarities and differences. The aim of this paper is to conduct a literature review on what role job design and work force diversity play in attempts to improve individual and organisational performance.

Job Design
In terms of job design, many aspects of HRM formulation address how the work gets done.

As said by Garg and Rastogi (2006), HRM has become one of the internal factors of the organisation that play a vital role in motivating the performance of employees. It is an essential part of every manager’s responsibility to make sure the employee has the right knowledge, skills and abilities to perform their job. The purpose of job design is to discuss what is needed from the job and the employee.

There are four types of approaches that can be used in job design. They are the mechanistic approach, the motivational approach, the biological approach, and the perceptual approach (Noe, Hollenbeck, Gerhart, & Wright, 2010). Studies from Hackman & Lawler (1971) and Hackman & Oldham (1976,1980) has indicated one of the model of how job design affects employee reactions is the individual-job design model, also known as the Job Characteristics Model-JCM (cited in Goris, 2007). Torraco (2005) also has recognized that “the JCM has had a persistent influence on work design practices and has accumulated an impressive amount of related research” (cited ini Goris, 2007, p.738). Another aspect that has been discussed is ergonomics, which also plays a vital role in job design and influencing the motivational level of employees.

Designing job ergonomically will help employee to avoid musculoskeletal injuries and awkward postures, also has a safe working condition (Garg & Rastogi, 2006). Based on research by Lantz and Brav (2007), job design and work routines have been shown strong effects on reflexivity, learning processes, and outcomes such as effectiveness, productivity, and job satisfaction. Job design has made positive impact for group processes and individual performances. Earlier studies (Brayfield and Rothe, 1951) said that global satisfaction has reflected a generalized or an overall evaluation of an employee toward his/her job (cited in Frimpong & Wilson, 2013). Evans (1969), Fisher (1980), Ironson et al. (1989) and Brown & Peterson (1993) have indicated three ways to measure job satisfaction. They are global, narrow and multidimensional measurements (cited in Frimpong & Wilson, 2013). Although job design sounds as a common problem in every company, it holds key to developing and maintaining a competitive advantage. Manager has the important role to know and understand the entire workflow process in their work unit to ensure that the process going effectiveness and efficiency. Halachmi (2005) pointed out that the basic premise of the concept of performance management is great performance, whether by an individual or by a group is very unlikely to happen on its own.

Workforce Diversity
Stockdale and Crosby (2004) have defined diversity management as “a voluntary and planned program designed to make differences between employees a source of creativity, complementarity and greater effectiveness” (cited in Alcazar et al. 2012, p.512). Diversity is viewed as a key to strengthen the human and intellectual capital of business through effective communication and negotiation (Okoro & Washington, 2012). Moreover, diversity has becoming a great factor for recruitment, productivity, relationship, and competitiveness of the organisations.

There are many advantages that come up from workforce diversity. Friedman (2005) and Gupta (2008) concurred that a diverse workforce can provide a fabulous advantage by employing new idea and communication skills, thus providing diversity thoughts from employee that will give better result in solutions and decision-making (cited in Okoro & Washington, 2012). Education and communication has become the key to transform the behaviour of the employees in terms of embracing and accepting diversity. According to Kundu (2003), he has categorised the benefits that organisation can achieve for creating a diverse workforce, such as organisation can provide better service because they understand customer’s needs (Wentling & Palma-Rivas, 2000); diversity will help organisation to enter the international area (Cascio, 1998); can enhances creativity and innovation (Adler, 1997; Jackson et al., 1992); produces competitive advantages (Coleman, 2002; Jackson et al., 1992); organization can succeed at diversity if they have initiative to create, manage and value the diverse workforce has the full support of the management (Hayes, 1999; Jackson et al.,1992).

On the other hand, the literature also has explained that the perception of differences thought among employees could produce negative impact within the group (Alcazar, 2013). William and O’Reilly (1998) pointed out that mismanaged diversity initiatives and implementations could negatively affect organization’s performance and processes (cited in Bergen, 2005). In addition, Devoe (1999) and Esty et al. (1995) argued that managers might be faced the losses due to personnel and work productivity and negative attitudes and behaviours from the employee.

Therefore, before designing an idea for managing diversity, it is necessary to define and analyse clearly all of the kinds of differences that the organisation needs to manage (Alcazar, 2013). Manager should be aware of the values of understanding, appreciating, and respecting human and cultural differences to be effective in interacting across cultural organisations (Okoro & Washington, 2012). Furthermore, it is critically important for managers to understand the importance of workforce diversity and effective communication in achieving the objectives of organisations and academic institutions.

Conclusion
Both of job design and workforce diversity have equal impact in attempt of HRM. Job design helps managers to developing and maintaining a competitive advantage in organisation. Beside that, managers need to know and understand clearly the entire workflow process in their unit. The other advantages of job design can identify employee’s knowledge and skills. It will help managers to determine employee’s position and job precisely. On the other hand, diversity also has important role in HRM. Organisation can have many advantages from implementing diversity into their business. For example to enhance creativity and innovation in the organisation and have better idea for decision-making. As a manager, it is necessary to analyse and define the differences in the organisation that needs to manage. 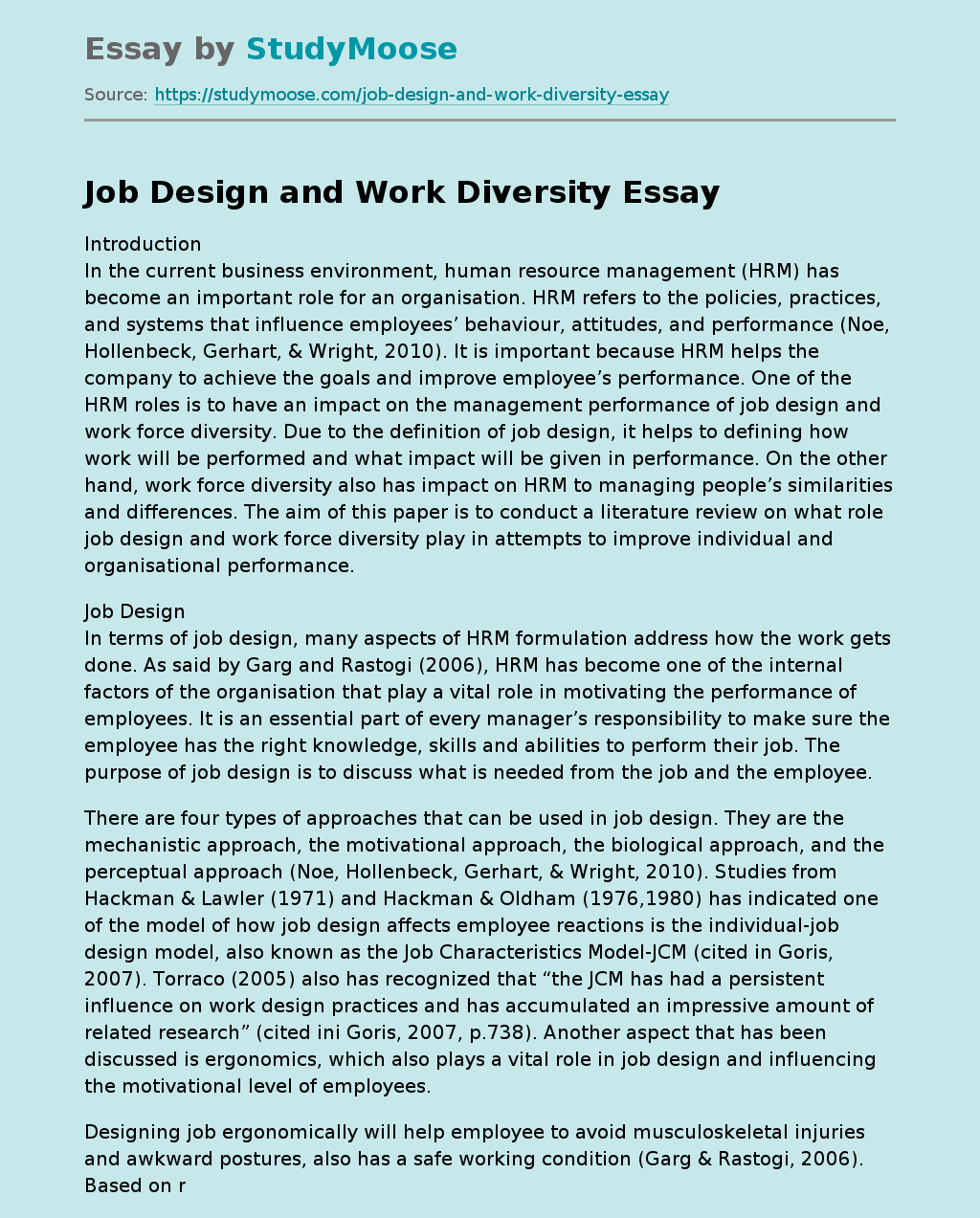