Joan Didion begins her story by illustrating what “home” is to her(p. 134). She describes how her home now is not the place where her husband and daughter live, but in the Central Valley of California with her family. With this introduction, one can sense that she is troubled by the differences between the two. Joan Didion goes on to reveal that her husband is “uneasy” in her family’s home(p. 134). He says that she becomes “difficult, oblique, deliberately, inarticulate,” which is nothing like the way her husband is(p.

Turn in your highest-quality paper
Get a qualified writer to help you with
“ On Going Home ”
Get high-quality paper
NEW! AI matching with writers

134). This allows the reader to see a side of Joan’s husband, obviously he doesn’t want to be around people who change his wife into a person that he does not know, but to not even go to his daughter’s birthday demonstrates that he is perhaps a difficult person himself.

Joan’s home-life is confusing with her family. She says that it is “dusty” and full of “mementos” from her life, which her husband holds no value to(p.

134). Living in a dusty house symbolically shows that their lifestyle needs work, and that they both do not pay attention to the minute details. If little problems come up in their lives, they will block them out of their minds and let the dust collect. This is perhaps why she feels that there is a conflict between her home in Central Valley and Los Angeles. Joan validates that point by saying, “we miss each other’s points, have another drink and regard the fire(p.

134).” She knows she missed her family, but she just can’t find the words to let them know. Instead of confronting the problem, Joan acts like she does with her husband and lets the dilemma sit; once again nothing is solved.

Furthermore, Joan Didion talks about her theory on how her generation is the “last to carry the burden of home(p. 135).” Joan gives the example of when she saw a “young woman on crystal take her clothes off and dance for the cash prize in an “˜amateur-topless’ contest.”(p. 135) Joan felt that her generation would have been to ashamed or afraid of what her parents would have said. In this day and age, the fear of dishonoring one’s family is no longer as important. Joan noticed this dissimilarity, but still “some nameless anxiety colored the emotional charges between me and the place that I came from(p. 134).” Joan’s family communicated in a way very different then the rest of society. They all have a code or a way of saying something without actually saying anything. Not being able to fully express her feelings might have been one reason why Joan is now having problems as an adult.

Joan begins to move toward finding an answer to her problem. She says, “that I am trapped in this particular irrelevancy is never more apparent to me than when I am home(p. 135).” Joan knows that when she is home with her family she becomes more like them and realizes she misses them. She goes on to say that she feels “paralyzed” by the objects in the house she grew up in(p. 135). Going “room to room,” Joan begins to clean out a few drawers(p. 135). She finds a few items from her past; a bathing suit, a letter of rejection from the Nation, picture of a land site that her father was going to build a shopping mall on, three teacups hand-painted by her grandmother, and a picture of her grandfather on skis. Each of these possessions mean a great deal to her and tell a story. Joan Didion doesn’t tell us what value these things hold to her, but one can sense that they each have some sort of importance. While looking at the picture of her grandfather, Joan decides that she holds little or no resemblance to him.

This observation demonstrates that Joan, once again, feels detached from her family. She feels that because she doesn’t look like her grandfather, that maybe she doesn’t belong. Though directly after this comment, Joan sits and has a cup of coffee with her mother and says, “We get along well, veterans of a guerilla war we never understood,” implying that she feels linked with her mother(p. 135). Since Joan has finally found some sort of connection with her family, she decides to go to the family graveyard. Yet, when Joan actually gets to the cemetery she doesn’t even get out of the car because when she was younger she saw a snake in the grass. Joan is still not able to move on and realize that she is attached to her family because she is part of it.

Later, Joan takes her daughter to visit her great-aunts. A few confuse Joan with her cousin and ask questions that do not pertain to her. Joan plays along and agrees that she still lives in New York, even though she lives in Los Angeles. Joan, again, doesn’t even tell these ladies that she isn’t her cousin, but instead pretends that she is to not start a conflict. This is an extreme example of Joan’s inability to communicate.

After the short visit with her great-aunts, it is time for the baby’s birthday party. This represents a new start for Joan. She is going to raise her daughter to have a strong sense of family, but also to be independent. At the end of the night, Joan promises her daughter a funny story along with her presents. Joan is trying to move on and look on the bright side of things and help her daughter feel more connected with her family. 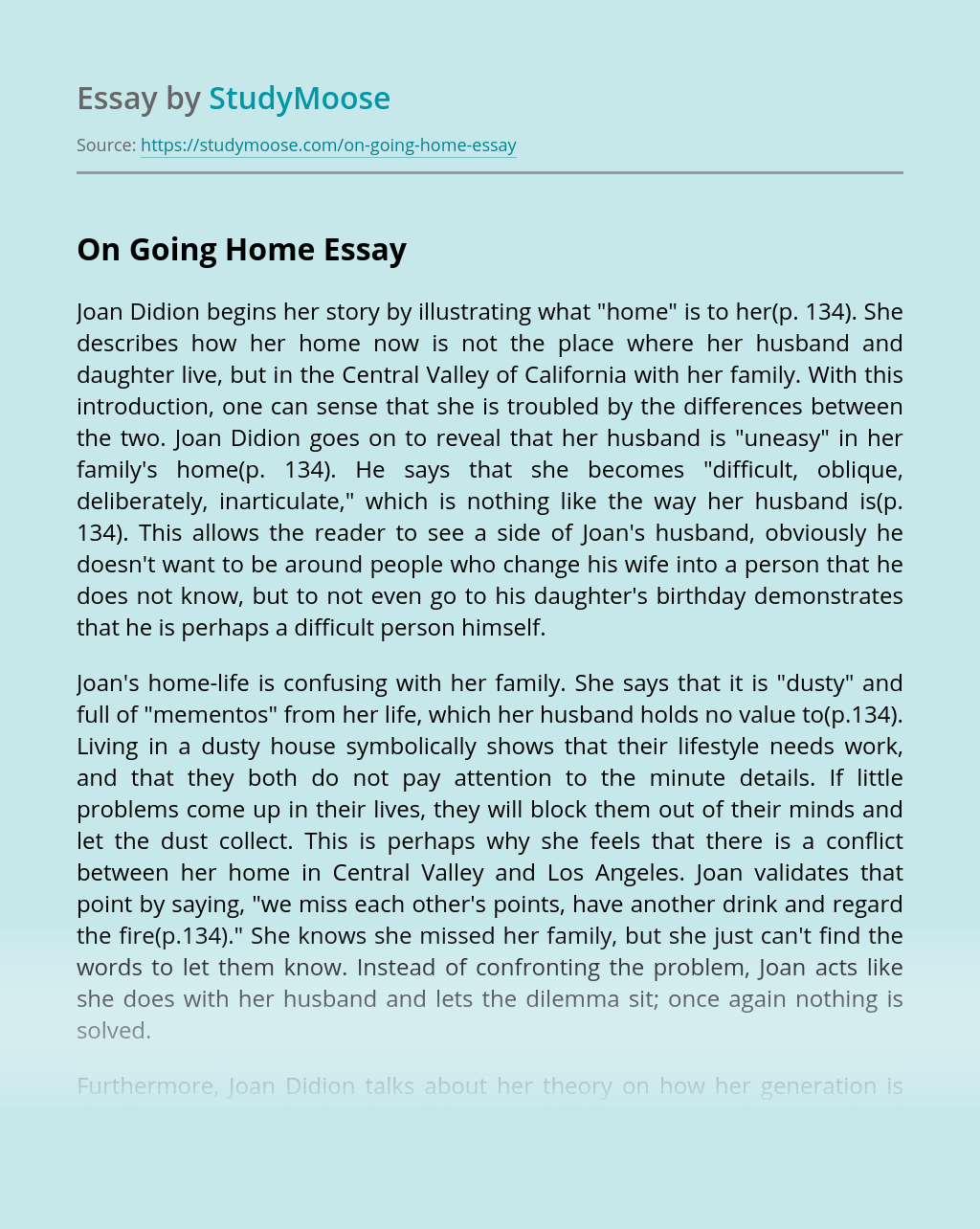 Turn in your highest-quality paper
Get a qualified writer to help you with
“ On Going Home ”
Get high-quality paper
Helping students since 2015
Stay Safe, Stay Original