There are many factors that have been found to negatively affect memory, one of which is stress. Smith and Aronin (2016), conducted research within the student population and found that 63% experience stress from the challenges of university academic work, as well as worries about future job opportunities. A study by Kim and Diamond (2002), also demonstrates that stress can affect memory in students. This is due to the release of specific hormones which then affects students’ attention and memory processes. Sandi and Pinelo-Nava (2007), found that it was hormones such as glucocorticoids found in the HPA pathway, also known as the stress response, which negatively affected areas such as the amygdala, hippocampus, and prefrontal cortex which are all areas involved in emotional response, memory and decision making.

Don't use plagiarized sources. Get your custom essay on
“ Reduce Stress and Anxiety Levels with Expressive Writing ”
Get custom paper
NEW! smart matching with writer

The study, therefore, outlines the importance of stress as a factor that negatively impacts memory on a structural level. Due to a large amount of research that has focused solely on expressive writing, this report will investigate whether the student population could benefit from the use of expressive writing therapy as a tool to assist them to cope with their stress and anxiety.

There are many therapies and coping strategies that can help an individual to decrease the amount of stress and anxiety they are experiencing. Neff and Germer (2010), found writing to have beneficial effects on a person’s mental health, researchers have found that writing about stressful or negative life events, brings positive long-term mental health effects, as found in (Hussain. 2010, Pizarro. 2004, Petitmengin. 2006). Therefore, writing could be a coping strategy or self-therapy that students could adapt to help with everyday stressors.

Moreover, Belmont (2016), suggests that there are many types of writing styles that a person could adopt, in order to help reduce their stress, including writing a letter to yourself, a letter to someone else, freewriting, creative poetry, thought trees, and mind maps, journals and blogging, affirmations, creative writing therapy, expressive writing, and self-compassion writing. Similarly, Frattaroli, (2006) found that when an individual experiences difficult times in their life, expressing their feelings in writing may improve their overall health and wellbeing. This means that an individual could express themselves through writing in different styles and could even change the style depending on what they prefer, making it more personal and possibly expressing themselves more effectively.

Research has been conducted to understand the effects of expressive writing and how writing during troubling and stressful experiences can act as a stress relief as well as improving memory. Baikie and Wilhelm, (2005), describe expressive writing as the exploration of emotions and thoughts through writing. Expressive writing was also found to enhance self-control as well as the ability to understand a negative event. Neff and Germer, (2010) suggest that this increased understanding may be due to visually seeing your emotions and feelings written on paper. This helps an individual to acknowledge and become aware of what is being experienced and it is this understanding which lowers the levels of stress. Baikie and Wilhelm (2005), also found that expressive writing can reduce the emotions connected with the memory which is being explored and this helps reduce the amount of time the memory is revisited. This could mean that expressive writing helps release the negative emotions associated with an event, due to it not being revisited again. Perhaps, the physical act of writing a negative experience can be a physical liberation of the issue which is being experienced.

Although expressive writing is beneficial in reducing stress which in turn benefits memory, Baikie and Wilhelm (2005) observed that the initial effect can be distressing. This could be due to the beginning process of expressive writing resulting in negative emotions and symptoms usually due to troubling memories. However, the study also found that the positive effects such as improved sleep and reduced medical problems appeared later in time and not immediately after the task had been carried out. This would suggest that get the benefits from expressive writing, students would have to partake in this exercise over a period of time. Sterpenich et al. (2009) supported the idea that improved sleep strengthens the link of emotional memories including memories stored in the long-term memory system. Furthermore, McGaugh and Roozendaal, (2002) found that stress hormones that are released before and after an emotional experience can play an important part in long-term memories. This suggests, that perhaps there are many ways to how expressive writing can help improve the encoding of memories. Therefore, because expressive writing can improve sleep this could help with the connection between memories that deteriorate during stressful times, meaning that it would be beneficial for students to carry on with expressive writing tasks during stressful times such as exam periods.

Although the majority of individuals who would like to acknowledge and understand the memories, feelings, and past troubling times that they have encountered, they do this by talking to others which can also include therapists. Depending on the subject some individuals cannot do this, due to it being very difficult to find the words or want to share such information as suggested by Pennebaker and Beall (1986). Therefore, expressive writing could be particularly beneficial for individuals who struggle with the ability to vocalize their experienced traumatic events or have troubling memories.

Pennebaker and Beall (1986), also found that individuals who wrote about emotions, feelings, and thoughts after a traumatic event, felt better than those individuals who were asked to write facts about the event, months after the expressive task was conducted. This means that it is the expression of feelings and emotions that it is beneficial to the individual writing and not the action of writing, as said by Belmont (2016). Additionally, Pennebaker and Beall (1986) found that participants in an experimental group who were asked to report their feelings gave more value and meaning to the troubling memory which could suggest they had an increased understanding of the experience.

Moreover, stressful events and troubling memories could impact a student’s ability to perform in an exam. This is supported by Ramirez and Beilock (2011), which found that students who undertook an expressive writing task before an exam performed better than students who had not undertaken the task before the exam. However, Teigen (1994) reviewed the Yerkes Dodson law which states that stress is not necessarily negative to performance. The study suggests that there must be an optimal level of arousal or stress to achieve and improve performance. Sandi and Pinelo-Nava (2007), have also found an inverted U effect in regard to information processing, therefore it could be that stress increases information processing which in turn facilitates memory. Yerkes Dodson Law could be explained through memory affecting Although this theory would contradict the idea that stress is negative, perhaps the intervention could be beneficial for students who experience greater amounts of stress during University or those suffering from anxiety.

Furthermore, because of expressive writing being beneficial the writing intervention could be used for other issues and not only for the student population. Earnhardt, Martz, Ballard, and Curtin (2002), found that expressive writing was not found to be beneficial for individuals suffering from eating disorders and a negative body image. Therefore, it would be important to take into account other issues to what students may be dealing with.

Depending on the memory Petitmengin (2006), found that writing about yourself in the second person increases the details of memories which allows a clearer representation of the life events. This further increases the understanding of the event and perhaps even depersonalizes the written memory from the self, reducing self-blame and the stress associated with troubling memories.

Expressive writing appears to have great potential as a therapeutic tool in various settings such as in a group or in a one-to-one situation. It appears that incorporating both the thoughts and feelings when writing words down the traumatic and emotional experience is helpful both physically and emotionally. It could be suggested that students should take part in expressive writing three times a week, for a period of 10 to 15 minutes as found by Pennebaker and Beall (1986) to be the optimal time. All that would be required would be pen and paper and a quiet environment. This will be cost and time effective due to the small amount of equipment and can take place in groups or by individual students. No particular rules are required when writing however Petitmengin (2006) found that writing about yourself in the second person, increases the details in events, allowing a more vibrant representation of the event`s details. However, other studies looked at the memory recall of previous negative events. They found that writing in first-person, is more detailed and vivid, and writing in third-person, has been found to relate with a negative self-assessment and memory avoidance which has been found to reduce cognitive processing about the events that have occurred. (Kuyken & Moulds, 2009. McIsaac & Eich, 2004).

In summary, although most students would benefit from expressive writing, it would also depend on how comfortable the individual felt and how much they would be willing to participate and open up about their deepest and most difficult memories. 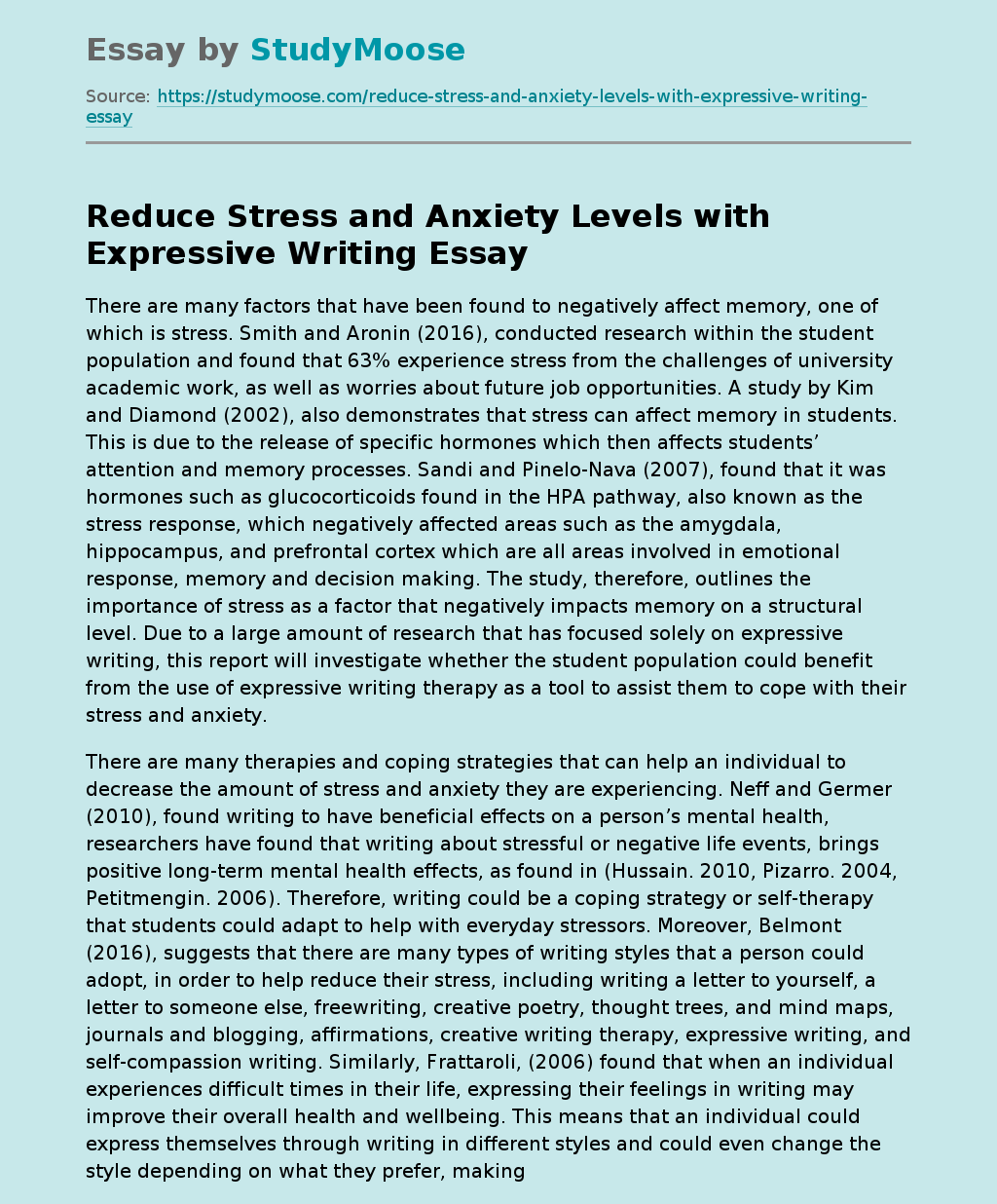