The Reproductive Health Law is now legal in our country. But what are the benefits and disbenifits of this Law to Filipino’s?

Before I write this reaction paper I had to read the Bill twice and read some articles, reaction and comments in the internet I had read books and research which is related to reproductive health, sex education and Bioethics, for me to fully understand what was the RH bill all about and the reason of the creation of this bill.

The Republic Act No.10354 or Responsible Parenthood and Reproductive Health Act of 2012, better known to all as the “RH Bill”, is probably one of the most controversial and most debated topic of 2012. After many years of bickering in the congress and among senators, which even lead to some tearful telenovela-like scenes as witnessed in senate proceedings, it was finally signed into a law by President Benigno Aquino III last December 21, 2012.

The Reproductive Health Bill is a law in the Philippines that guarantee universal access to methods on contraception, fertility control, sexual education, birth control and maternal care.

This bill or law is to provide the poor with reproductive health services, including access to contraceptives, and sex education to school children. That is why the priests and the church officials are not in favour of this bill because for them it is against the law of GOD, and some people disagree to use it because there is a rumours that after you use contraceptives you’ll get sick. In my point of view, I thought this argument is unnecessary for me to know because I’m just a student and I thought at first this bill is useless to the people after I read it, it is useful to the Philippines.

This bill must be known to all the Filipinos out there.

The law, which provides access to contraceptives as a family planning method, gives women especially those in poor households, a choice to better their lives, their children’s and the whole family as well. Although it was strongly opposed by the Catholic Church and by several groups spurred by deeply-held beliefs and values, it aims to primarily alleviate poverty in our country.

Poverty, the main problems that the Philippine is facing today and they say that the primary factors that lead to poverty is due to overpopulation, the Philippines has a population of 64,318,120 in 1990. Today the population is ballooning and estimated to over 94 million according to latest census and the top 12 the country having the most population. The population is growing by about 2 percent a year, giving the Philippines one of the world’s highest population-growth rates. This is one of the reasons of the creation of the Reproductive Health bill to give a solution to poverty by eradicating the overpopulation problem, by implementing family planning, sex education and prevent the sexually transmitted disease.

Now, women have access to more information about their reproductive health, thus giving them a choice to limit the number of children without having to resort to drastic measures such as abortion. It is empowerment for women while also allowing children their basic human rights. If we do not implement this now, the quality of life of the poor will steadily deteriorate. It is very evident in most slum areas that we find more children, most of them living in severe poverty and inhumane conditions. What future does our country hold if the future generation, the so-called “hope of our nation”, cannot even be properly fed and clothed, much more, educated well? It is as simple as that, yet it is a truth that sadly, some people fail or choose not to realize. 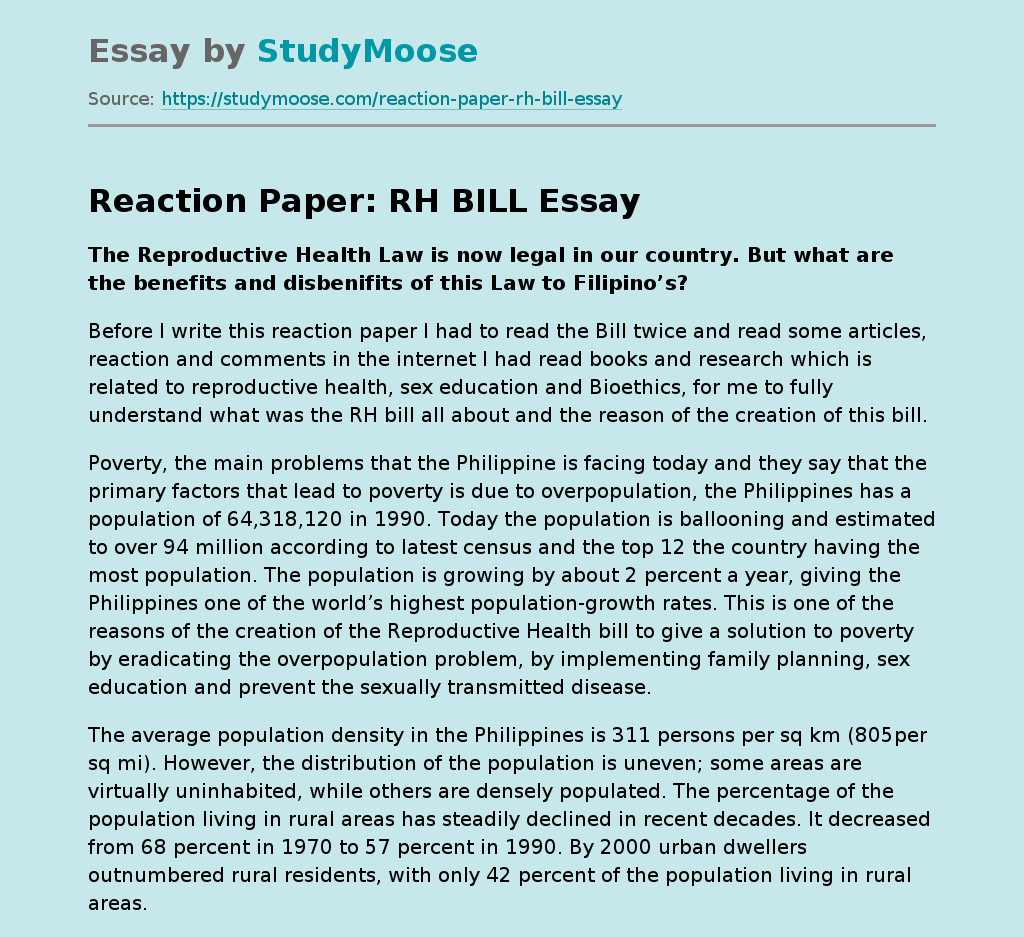