After watching the documentary “Hot Coffee,” I realized that it greatly explained how one incident started a domino effect that shook up the way Government protects big business forever. I strongly believe that Tort reform was meant to back big business and take away the rights of Americans who are wronged by these corporations. From a sociologist standpoint I can especially see the concerns of a conflict theorist because this is capitalism at its best.

When Stella Liebeck sued McDonalds for a cup of hot coffee that she spilled on herself, a lot of people originally viewed the situation as a joke and as a plan for someone to get rich quick.

Before watching the documentary I had no knowledge of the incident and thought it sounded like a case of lawsuit abuse. Soon after watching, I saw the negligence of McDonalds by not monitoring the temperature of the coffee and the major damage done to Stella’s skin. The medical bills were major and she deserved not only compensation for medical bills but punitive damages as well.

She was awarded 160,000 dollars in damages and 2.7 million in punitive damages (eventually reduced to 480,000). After such an infamous case, it opened the floodgates for other Americans to go after businesses that had wronged them.

In a case for Stella, the lawsuit was justified, but there were cases across the country were lawsuits were filed and many were trying to “get rich quick.” Sure it is a controversial situation but Tort Reform was used a defense mechanism for big business.

Companies like tobacco corporations for example, were actually behind lawsuit abuse groups trying to help spark tort reform to favor them. They had all the money to back political campaigns for nominees that would favor tort reform. This I believe is a matter of capitalism because the rich are investing in themselves and are literally fixing campaigns by funding whomever they believe look after their best interest. As another example, The Chamber of Commerce are a committee assembled of big business corporations who fund political campaigns for nominees who back their political views and invest in their well being instead of the nation as a whole. In other words, the rich want their nominees to win in order to protect their investments, therefore they all band together to achieve this goal.

George W. Bush was definitely a beneficiary of highly funded campaigns and it showed. During his presidential campaign he was lobbying for Tort Reform and that meant capping punitive damages. There are cases where this cap hurts the people who are wronged from businesses that have wronged them. In the documentary the case of Colin Gourley strongly was affected by tort reform.

Lisa Gourley gave birth to twins and during her pregnancy was constantly misdiagnosed and improperly observed. Because of the neglect of her doctor, one of the twins, Colin, was born with brain damage and would require therapy and special healthcare for the remainder of his life. She was constantly uneasy with the progress of her pregnancy but was always reassured by her doctor. Because of negligence, Lisa Gourley was awarded 5.6 million dollars in a lawsuit. However, due to the law in Nebraska, it was reduced to 1.6 million. This is a prime example of a system that failed a family due to tort reform.

Ultimately this documentary opened my eyes to the many capitalist ways we operate as a country. This most definitely identifies with conflict theory. It is understood that this country is ran and protected by the wealthy. There are ways for things to change but this documentary demonstrates where our challenges lie. 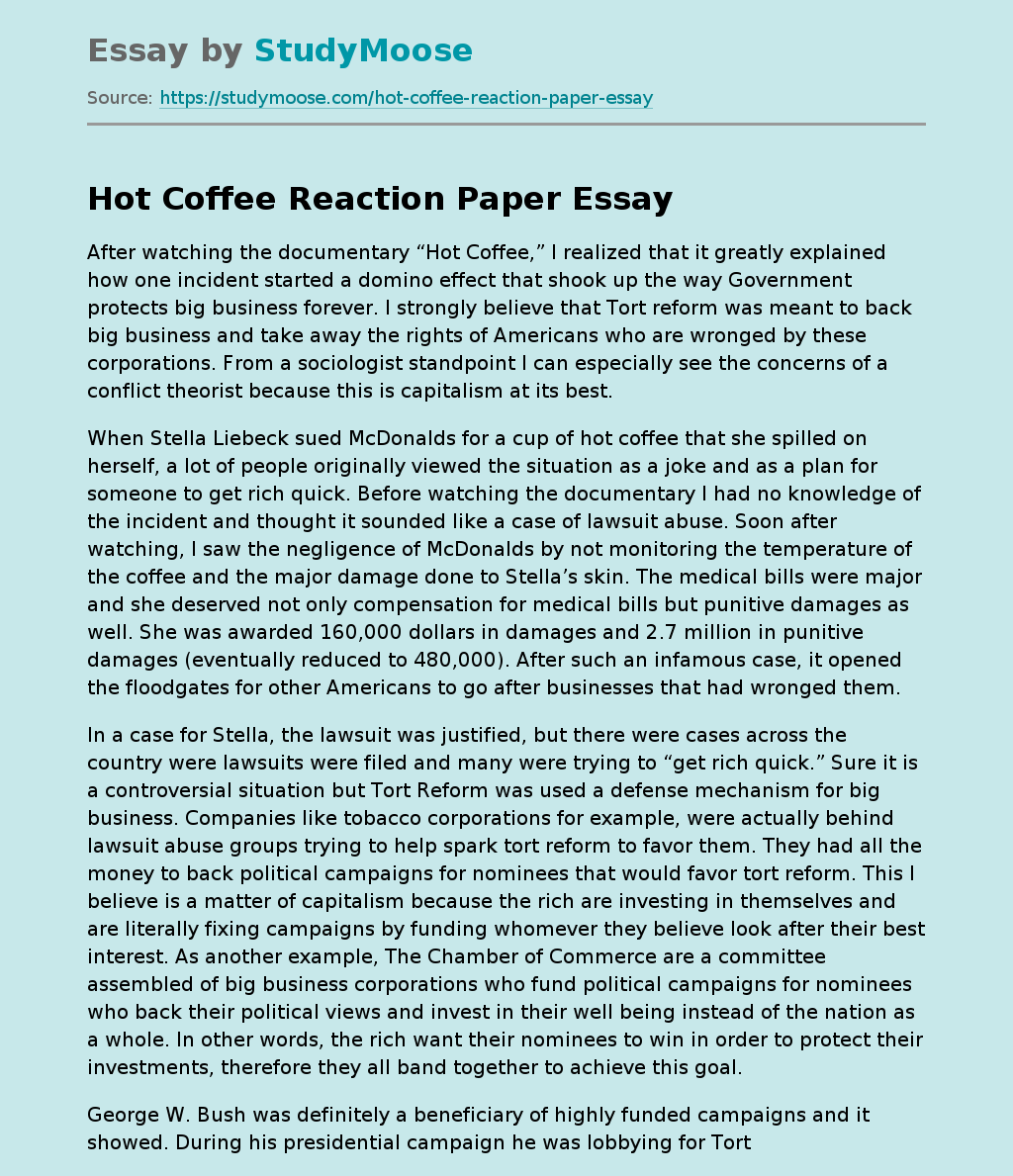