Making a historical film is always a tough endeavor. What makes it even more challenging is its subject happens to be a controversial figure in history. And one of these is the El Presidente which was became one of the entries in Metro Manila Film Festival 2012 directed by Mark Meily. He crafts a tale centering about Emilio Aguinaldo, the first president of the First Philippine Republic. This general, politician, and revolutionary leader lived a long, grim, and gainful life from the time of the Philippines’ revolution against the Spanish colonial rule to the American and Japanese.

Don't use plagiarized sources.
Get Your Custom Essay on Reaction Paper “El Presidente” Just from $13,9/Page

Jeorge “ER” Estregan plays the lead role with Cesar Montano as Andres Bonifacio. In this film, the story touches on the revolutionary encounters, as well as the many issues, that took place during Aguinaldo’s time. It also explores his inner struggles as a husband, a member of the working class, a war leader, and a politician.

It boasts a grand production highlighted by sophisticated cinematography and set pieces.

Compared to many other Filipino epic and historical pictures that fall short on their technical ventures, this film gets high marks in its period and action sequences. Even with some inconsistencies and softness lingering in a couple of scenes, many shots still offer that “WOW” factor for the viewers. And most importantly, the production is still able to live up to the emotional investment such a historical offering needs to promote a sense of nationalism. Clearly, “El Presidente” is not a perfect film. But in the end, it still shines as a passionate attempt to contribute something valuable for Philippine cinema. This is somehow helps put a man where he belongs in the annals of history, while also inciting a form of curiosity and a sense of patriotism to its intended viewers. It also provokes the audience to have a more open mind on heroism. Even though this person finds himself makes mistake, for others, or even for the entire country, it still allows certain realizations on how a human being becomes capable of great things.

The movie EL PRESIDENTE is based on the life of General Emilio Aguinaldo, the first president of the Philippine Republic. It aims to present a comprehensive narration of his life, achievements and even some controversial issues about him such as his relationship or conflict with other Filipino hero, Andres Bonifacio. At first I’m not interested in watching because I thought it would be boring for us teenagers to watch that kind of movie. But I realized that it would be nice for me as a student or should I say it would be a helpful reference for me to know about the life of Gen.Emilio Aguinaldo and how the first Philippine President fights for our freedom. 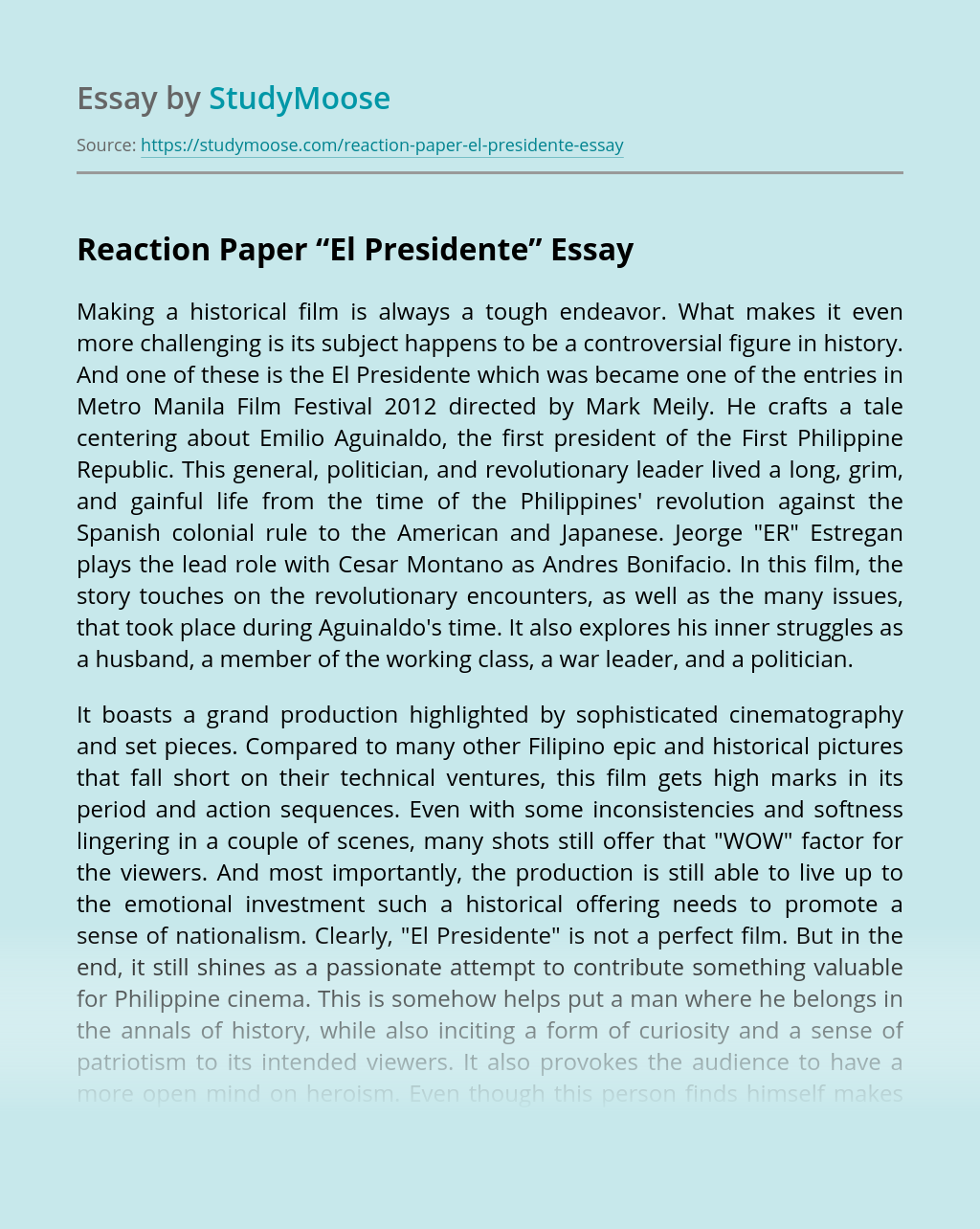 Waste management in the Philippines

Issues of Garbage in the Philippines The more waste in the Philippines causes the increase in global warming, high temperature and less oxygen because of the air pollution. The Philippines’ trash increased by 40 percent in 2010 and the ocean found 1,355,236 items of trash and people, nearly 400,000 volunteers, gather from around the world...

For the Philippines, the seventies was more than just a period of shaggy hair, bell-bottom jeans, platform shoes, and disco music. It represented the rise of the conjugal dictatorship of Ferdinand and Imelda Marcos, a U.S.-sponsored regime characterized by military repression and wholesale human rights violations. Conversely, it was also the fecund period for the...

Jose Rizal had many beautiful memories of childhood in his native town. He grew up in a happy house, ruled by good parents, bubbling with joy and sanctified by God’s blessing. Rizal is industrious, hospitable and friendly folks impressed him during childhood years. And the happiest period of Rizal’s life was spent in this lake...

Philippines, when we hear this word one thing pops out in the mind of most people in the World, Typhoon Haiyan, that barreled through most of Visayas, leaving a trail of devastation in its wake. Being the most powerful storm ever landed, how do Filipinos react into this kind of calamity? The fact that many...

Restobar is a business establishment which prepares and serves foods, drinks and also alcoholic drinks to customers in return for money, either paid before the meal, after the meal, or with a running tab. There are many restobar already these days. It gives more satisfaction to customers due of many foods, drinks, and services that...