The story is told in flashbacks as Emilio Aguinaldo thanks the US government for giving him the opportunity to attend the full restoration of Philippine independence on July 4, 1946. The film begins with his capture by Philippine and US forces under Frederick Funston’s command in 1901, then flashes back to 1886, when an old woman gives Aguinaldo and childhood friend Candido Tirona cryptic prophecies. Ten years later, Aguinaldo is inducted into the Katipunan and later assumes leadership of its Cavite chapter while becoming mayor of Cavite El Viejo.

Don't use plagiarized sources.
Get Your Custom Essay on A Movie Review on “El Presidente” Just from $13,9/Page

When trouble breaks out in Manila in late August 1896, Aguinaldo tries to assure the Spanish provincial government of non-interference and covertly marshals his forces despite a lack of weapons. Learning that the Spanish mostly put their forces in Manila, Aguinaldo finally mobilizes his troops and take the fight to Spanish troops in Cavite. As the rebels gain ground in Cavite and several provinces, its Magdalo and Magdiwang factions convene to elect a provisional government.

Andres Bonifacio oversees the Tejeros Convention, which elects Aguinaldo as president, Mariano Trias as vice-president, and himself as interior minister. He storms out of the convention when Daniel Tirona objects to his election. Aguinaldo’s brother Crispulo informs him of his accession and convinces him to leave his troops just as he was seeking to defend against the Spaniards at Pasong Santol. The rebels are defeated and Crispulo is killed. Meanwhile, an embittered Bonifacio establishes his own revolutionary government and is later arrested. Aguinaldo is concerned about Bonifacio’s actions and wanted him exiled, but the War Council advises his execution. Several months later, Aguinaldo leaves Cavite with most of his forces intact and makes it to Biak-na-Bato in Bulacan, where he signs the Pact of Biak-na-Bato and heads for Hong Kong.

There he meets with US officials who approach him with offers of support and recognition of a new Philippine Republic amidst the Spanish-American War. Aguinaldo returns to the Philippines and formally declares independence from Spain. As the Malolos Congress convenes, Felipe Agoncillo tries to represent the new nation at the Treaty of Paris negotiations, but gets stonewalled at every turn even as US forces gradually arrive in the Philippines. The Philippine-American War breaks out in February 1899 and Antonio Luna is appointed commander of all Filipino troops. He is assassinated three months later and the Filipino troops are gradually routed by the Americans. As a result, Aguinaldo’s forces travel all over northern Luzon to escape the Americans. General Gregorio del Pilar volunteers to lead some troops in holding them off at Tirad Pass and buy Aguinaldo time to get away.

His loyal courier is later captured by the Americans while getting some medicine for his son. Now aware of Aguinaldo’s hideout, Funston plans his capture. Having been made to accept US rule over the Philippines, Aguinaldo lives a quiet life, which is marred by Hilaria’s passing in 1921. He meets and marries Felipe Agoncillo’s niece Maria in 1930. Over the next few decades, the couple witness Philippine history unfold once more as he is defeated in the 1935 presidential elections, Japanese occupation and the restoration of full independence. In 1962, an elderly Aguinaldo and his wife comfort each other over President Diosdado Macapagal’s decree to restore the actual date of the Philippine declaration of independence. In his final hours, the same woman who gave him his prophecy appears to him one more time.

F. Criticize on the following
I. Story and Theme
El Presidente is a Historical Film wherein the life of Emilio Aguinaldo is portrayed from the Spanish Era, until the Philippine Independence.
II. Screenplay

The screenwriters inserted some Spanish Dialogues, English, and Filipino in the script. And I was discontented with the screenplay itself. I didn’t like the dialogues especially when Baron Geisler who portrayed as a Spanish official talked to Emilio Aguinaldo in Spanish saying that he doesn’t understand Filipino, but then all of a sudden he understood it. That is just an example of the lack of continuity of the script.

The Director in this movie did a decent job of portraying the life of Emilio Aguinaldo. I said decent because I was quite disappointed with the way the movie played out. I expected so much from this movie, but in every scene, I don’t know if the director overlooked it, but I really am discontented with every scenes.

From the casting, to the acting, to the costume, I didn’t like it. Bayani Agbayani and Bearwin Meily are good comedians for me. But here in this movie where it is sort of historical and more on drama, they didn’t fit the roles and also there are also some cast in which I didn’t like. I also didn’t like the costume of some artist, especially the fake moustache of some of the actors. I also didn’t like the acting of Jorge Estregan as Emilio Aguinaldo because he seems to be lacking in facial expression and at some point too melodramatic.

The dialogues were good but they could still improve. The consistency of the dialogues form Spanish to Filipino were lacking just like my statement on the Screenplay.

The soundtrack of El Presidente is no doubt entertaining and good that is why it won some of the awards in terms of theme song.

The costume seems to be good for it portrays the historical background of our country.

i. Interesting Facts about the making of the film
* Judy Ann Santos was initially offered to play Hilaria Del Rosario. She refused to accept the movie saying she can’t relate to the character because she doesn’t know Hilaria personally. * Tikoy Aguiluz backed out of directing this film after a misunderstanding with Jorge Estregan over Manila Kingpin: The Asiong Salonga Story.

iv. Social, political, and/or historical context for the film The movie is partly based on Aguinaldo’s Memoirs of the Revolution. Writer-director Mark Meily states that the project had its genesis back in 1998. Over the intervening years, careful research was made in order to accurately portray Aguinaldo’s life, especially facts that have been glossed over in history books. These include his conduct over the trial of the Bonifacio brothers and his other actions during the Revolution. Meily himself was brought into the project as director after Ejercito pledged never to work with original director Tikoy Aguiluz because of their rift over editing Manila Kingpin. Shooting took place over 43 days at select locations in Cavite, Laguna, and Bulacan, with the Las Casas Filipinas de Azucar in Bataan substituting for urban scenes

v. What others have said about the film

* The Philippines’ Cinema Evaluation Board graded the film at A. * Phillip Cu-Unjieng of the Philippine Star said it “vividly recaptures” one of the Philippines’ most turbulent periods in history by exposing the infighting among the Katipunan’s members and how Aguinaldo wanted to resolve them. He noted that the film’s quality makes it almost stand out as much as Richard Attenborough’s Gandhi, Steven Spielberg’s Lincoln, and Martin Scorsese’s The Aviator. * Philibert Ortiz-Dy said making the film was tricky, but dragged towards the end.

* The movie garnered most of the awards at the 2012 Metro Manila Film Festival, winning the plums for Second Best Picture, Best Supporting Actor (Cesar Montano), Youth Choice Award, Best Float, Best Sound, Best Musical Score, and Best Make-up. * Columnist and radio show host Jessica Zafra, however, was critical of the movie’s treatment. She said the depiction of Bonifacio’s death raised questions about its authenticity. She added that the film itself “does Emilio Aguinaldo a disservice by portraying him as a victim of circumstance” and even highlighted the “amnesia” prevalent among contemporary Filipinos.

The film was more of a historical appreciation of our previous heroes. The film taught us that our Filipino heroes fought for our freedom therefore we should cherish it.

Over-all the film is good for it depicts the life of our national heroes. Though the film seems to be a bias on the part of Emilio Aguinaldo because the death of Andres Bonifacio and Antonio Luna were different on the history books. From the acting to everything, it is a good film but it can still improve by so much.

A Movie Review on “El Presidente”. (2016, Dec 10). Retrieved from https://studymoose.com/a-movie-review-on-el-presidente-essay 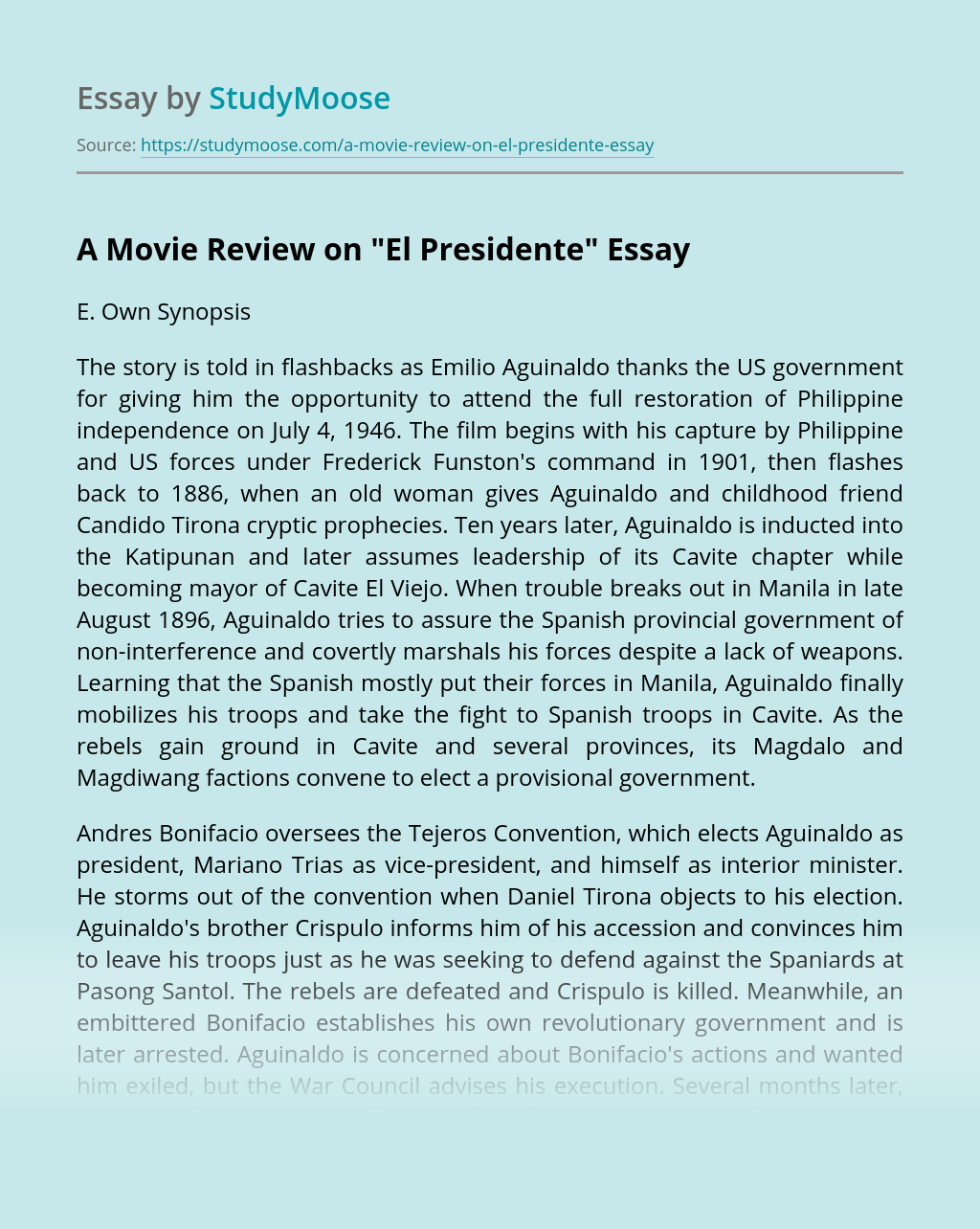