Racism Is a Prominent Problem in America

The topic of my choosing is going to be racism. I believe that racism is a prominent problem in America and I do not believe it has gotten any better. I believe that racism is thrown around too lightly these days because people simply do not care what other people think. It is time for this nation to grow up and let go of racism. There is no sense in purposefully being derogatory to another human being. The color of your skin does not matter and neither does your race.

Don't use plagiarized sources. Get your custom essay on
“ Racism Is a Prominent Problem in America ”
Get custom paper
NEW! smart matching with writer

The history and background information surrounding racism can be a very sensitive discussion but we are going to discuss it anyways.

Naturalization Act of 1790 restricted citizenship to free Whites. Congress passed the Civilization Act of 1819 to take in the Native Americans. This law provided United States government funds to support Protestant missionary educators in order to convert Native Americans to Christianity. In 1863, President Lincoln issued the Emancipation Proclamation as the nation approached the third year of the civil war which declared, “all persons held as slaves” within the rebellious states “are, and henceforward shall be free.

” It applied only to states that had left the Union which left slavery untouched in loyal border states. This also excused some of the Confederate states which had already come under Union control. This made the freedom it promised depend solely upon the Union’s military victory. This freed many slaves but also protected the enslavement of others if the Union had already regained control of the areas they were in.

In 1864, the 13th Amendment to the U.S. Constitution abolished slavery. In 1866–1877, while trying to reconstruct the country, the Union tried to bring the Southern, or Confederate, states back into the union in order to attempt to make a non-slave society with civil rights for slaves. Black and white teachers from the north traveled south to build schools and teach former slaves eager to become literate. With the protection of the 13th, 14th, and 15th Amendments and the Civil Rights Act of 1866, African Americans participated in politics, voted, used public accommodations. The former confederates fought against reconstruction and eventually eroded newly gained rights of freedman.

Very few people are willing to say it and even fewer wish to acknowledge it but, there is even racism in our schools, the government, and the media. The government seems to be more confused on racism than any other thing. All of these affirmative actions are being considered and passed but, there are also a large number of anti-affirmative action laws that are being passed. According to the National Employment Lawyers Association, or NELA, we still need affirmative action for many reasons. According to NELA, women earn 71 cents for every dollar earned by men. For every dollar a white male makes, African-American men 72 cents, African-American women make 64 cents, and Hispanic women 54 cents. How much melanin is in your skin, is determined genetically. This is not something that you can change. Your skin color is determined based on your genetics and it should not have an effect on your life.

Racism Is a Prominent Problem in America. (2021, Apr 23). Retrieved from http://studymoose.com/racism-is-a-prominent-problem-in-america-essay 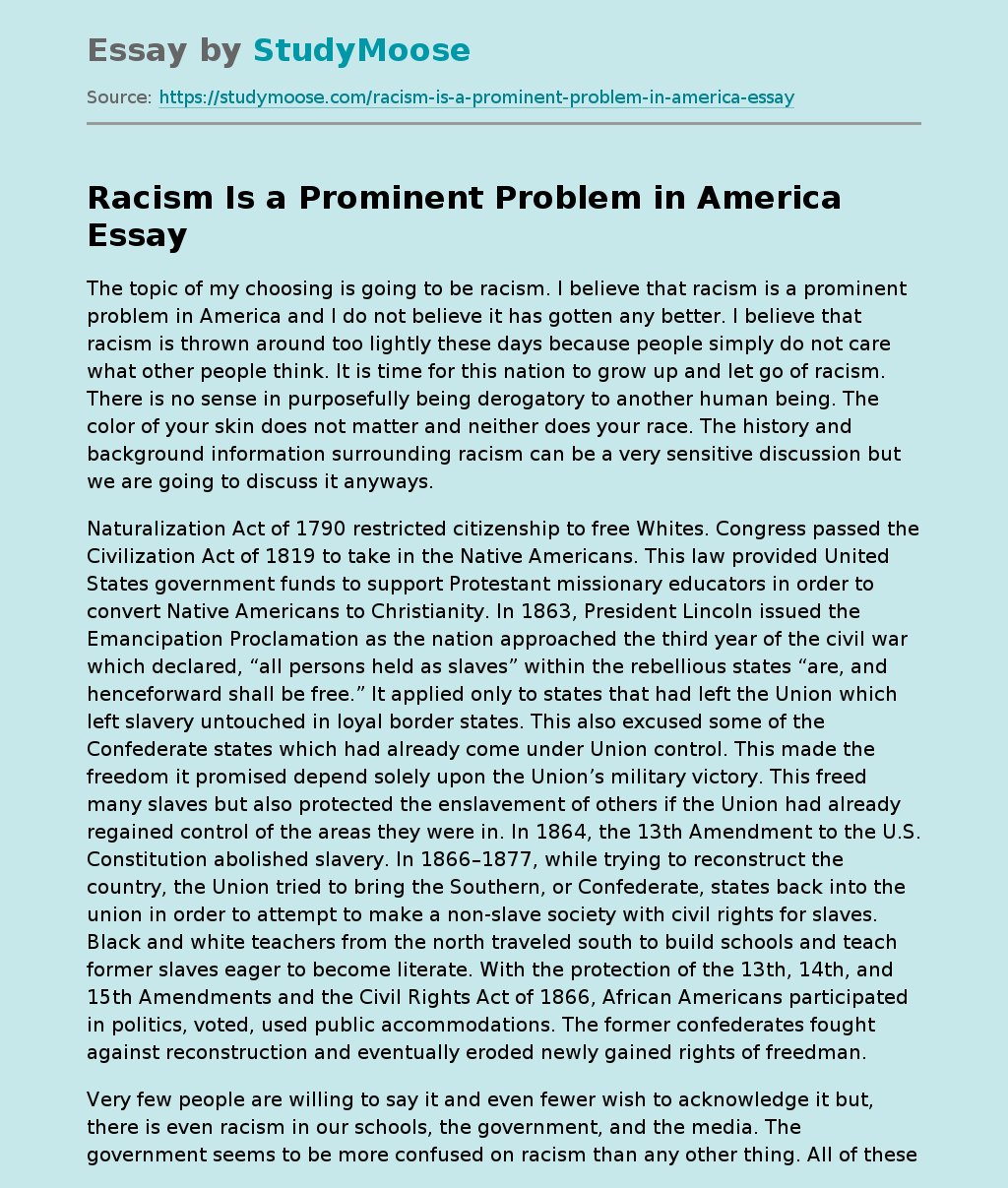