Racism In Football: A big issue

Football is one the biggest and most popular sports in the world. It has grown rapidly from a small sport originally played by the Romans and Greeks to a worldwide hobby. However, it could be suggested that with the growing problem that is racism, football is becoming known as a sport for hooligans. This aggressive attitude is ever present amongst the fans and players alike and this is not how football should be.

Why is racism is football a big issue? With recent cases such as John Terry and Anton Ferdinand and also Luis Suarez’s racist remarks towards Antonio Valencia, the increasing aggression is becoming evident and frowned upon by football critics.

Don't use plagiarized sources. Get your custom essay on
“ Racism In Football: A big issue ”
Get custom paper
NEW! smart matching with writer

Former Manchester United manager Sir Alex Ferguson claimed: ‘Apart from last year, I don’t think it’s been an issue. I’ve not seen anything for 20 years. Suddenly one bad year doesn’t cast the game in doubt as far as I’m concerned.’ Although Alex Ferguson is highly regarded in the footballing industry, his bias is evident, being a lover of football.

Understandably, racism is not just a problem in football but in many sports, at all levels – from amateur to professional. However one cannot just disregard it for this reason; it can have devastating effects on young people when they see their role models calling other competitors cheats because of their skin colour.

Racism is common in all Football Leagues. From the Bundesliga to the Barclays Premier League, racism clouds over the teams’ stadiums. Lots of people (including many football fans) have noticed the abuse and racism getting worse as the years have passed.

Sir Alex Whittingdale- an MP of the FA said: “We believe it is the FA’s responsibility to lead and set the example for everyone, from football authorities at all levels to the grassroots groups, to follow.” It is evident that Whittingdale is showing a mature response to the situations that occur weekly in football, but is it likely that racism and abuse will die down in the years to come? In fairness, one must take into account the impossibility to control a nation of different types of people. Another factor to consider is how young children react to not just verbal abuse but physical abuse; even small incidents such as players pushing each other can be interpreted negatively by young children.

Evidently the FA are trying to stop racism amongst the players. Last December, Liverpool striker, Luis Suarez, received an eight match ban and forty thousand pound fine when found guilty for racist abuse towards United right back, Patrice Evra. However when you put it into perspective – the amount of money that Luis Suarez is earning per month – it is hardly the harsh punishment deserved. Suarez is earning up to one-hundred and fifty thousand pounds a week and cutting his salary by a quarter for one of those weeks is pathetic.

In the Polish League, fans boo, hiss and torment black players when the ball is played to them- even at their home ground. Imagine how it must feel to know that despite the fact you are at equal ability as all the other players on the pitch, you are treated like an animal because of your skin colour. Why should religion or country of birth affect the way we are treated? We are all equal.

Furthermore, the use of alcohol should be controlled or banned in football venues. Alcohol is generally people’s first excuse. The term: ‘I didn’t mean it, I was drunk’ is commonly heard and even more so by football fans who are (in some cases) too arrogant to notice the severity of their actions. Alcohol has proved to be an extreme killer on the roads and is proving to be the source of hatred and abuse amongst football fans. If it were to at least be controlled, it is estimated that both physical and verbal abuse cases could half, making football venues happier and safer place for everyone.

Unbelievably, in English football, there have been cases where scouts were told specifically not to hire Asian players, yet the FA have claimed that “substantial progress has been made”. Although they acknowledge that “challenges remain”, has progress really been made if these events have all occurred in the past two years? Clearly not if there is rioting at Euro 2012, racist abuse from football stars who are the role models of young children and scouts being told to avoid hiring Asian players. These young Asian stars train just as hard as the European players do, but because of where they were born, the teams seem to believe that they cannot play internationally and earn the same amount as the European League players.

Unfortunately enough evidence has been gathered over the years to conclude the fact that football has become racist as it’s grown globally. The seemingly never-ending cycle of kids seeing their role models act like hooligans on TV and behaving the same way when (and if) they too become professionals, must end immediately. Only we can do this by acting appropriately and it is only when we do, that we can make football fun, safe and enjoyable to watch for people of all ages.

Racism In Football: A big issue. (2016, Sep 16). Retrieved from https://studymoose.com/racism-in-football-a-big-issue-essay 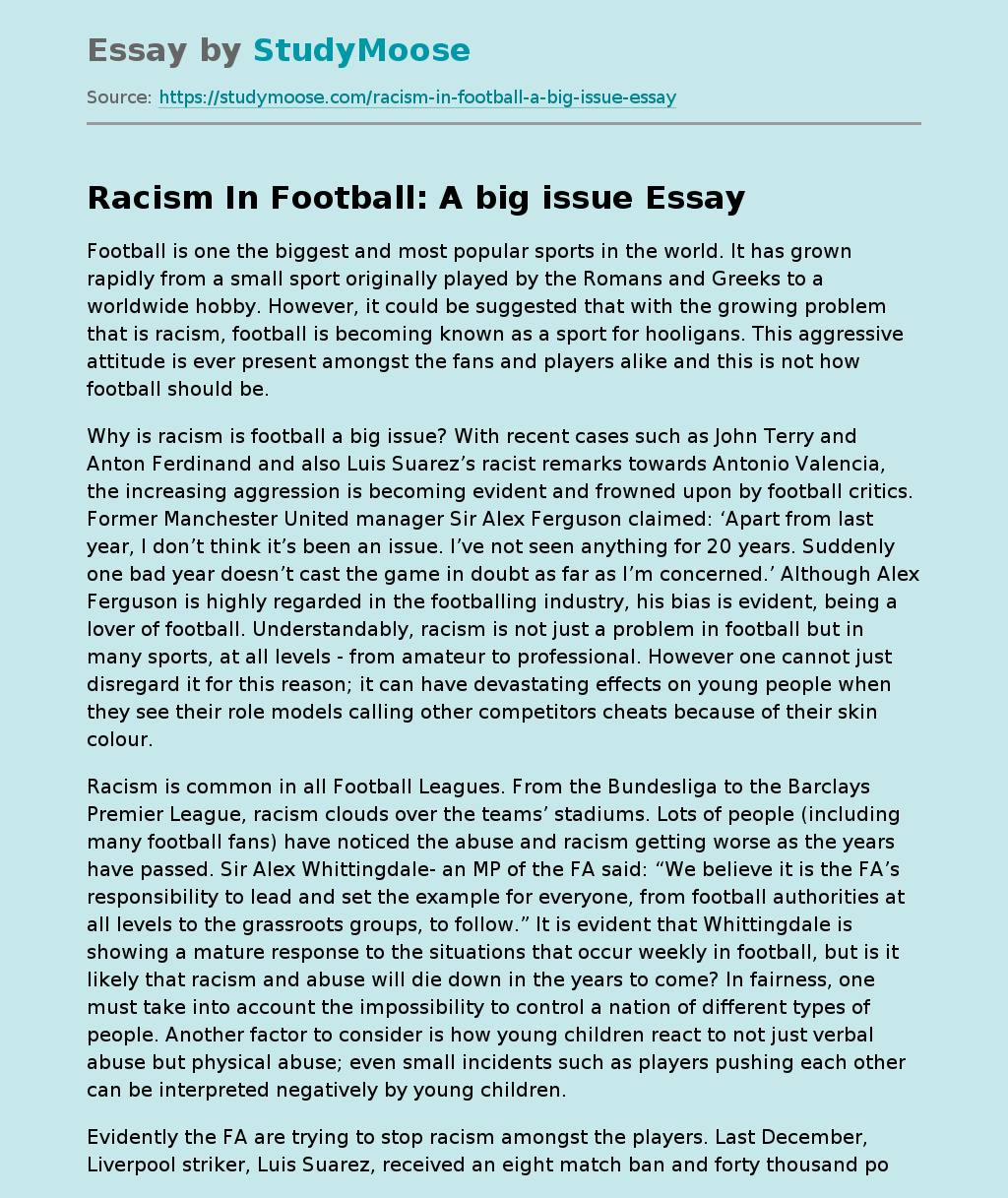