Racial equality could depend upon government action, however, racial equality begins with the individuals. Throughout history, the American Government has done numerous thing, like creating laws to get rid of minorities. The American people are the ones that started the racial equality in the United States of America. The people of America organized movements, created organizations, and went against certain laws that made racial inequality. An example of the American Government getting rid of minorities and the people standing up to it would be slavery.

Don't use plagiarized sources. Get your custom essay on
“ Racial Equality in America ”
Get custom paper
NEW! smart matching with writer

Even though the people got to stand up to end slavery and slavery became banned , it ultimately caused segregation by the government. The cycle then continued similar to slavery to end segregation. Government action has also influence inequality towards other minorities such as the Chinese immigrants during the late 1800s and the Japanese in the early 1900s. America as a whole have gone through many epiphanies that made them realize what they were doing was wrong which ended most of these times of inequality.

The epiphanies started with the people and then worked its way up to the government to change laws. Racial equality has trusted on the individual people to make changes in the American Government. In that sense, the individuals have created racial equality what it is nowadays.

The Civil Rights Act in 1875 was enacted during the Reconstruction Era in order to protect United States citizens, particularly African Americans, in their civil and legal rights. The act was first introduced in 1870 by Senator Charles Sumner of Massachusetts, one of the greatest advocates for black civil rights in Congress.

The act was meant to guarantee equal treatment and outlawed racial discrimination by public facilities such as hotels, juries, theaters, schools, railroads, and other public accommodations. In 1883, the Supreme Court argued that the Constitution’s Fourteenth Amendment only prohibits unequal treatment by state authorities and not private businesses and thereby invalidated the Civil Rights Act of 1875.

The United States government not only displayed racial inequality towards African Americans but also against Chinese immigrants in the 1850s.A sense of an anti Chinese sentiment grew strong, especially on the West Coast, as native born Americans became more unemployed with declining wages and Chinese labor increased. As a result there was a law that was designed to limit any future immigration of Chinese workers to the United States and prohibited them from becoming United States citizens. This resulted in a possible sour diplomatic relations between the United States and China. This was ironic because of how many Chinese immigrants were actually helping Americans build the Transcontinental Railroad. Most Chinese laborers who came to the U.S did, therefore so as a refund to China to support their families there. At constant time, they also had to repay loans to the Chinese merchants who paid their passage to America. Chinese immigrants only consisted of .002% of the nation’s population and Congress still passed the law in order to keep “racial purity.” The law was in effect for twenty years (the Geary Act extended the Exclusion Act for another 10 years) and did not allow for Chinese to obtain naturalization in the United States. The law soon became permanent in 1902 requiring each Chinese resident to register and obtain a certificate of residence. Without a certificate, she or he faced deportation.

Throughout the United States history, people create great strides towards racial equality by addressing their opinions to the government through their actions. Those who stood up and were against the forces of racial inequality and prejudice played a major role in modifying the American outlook of race and ethnicity. While the people create the spark of change, the government ultimately is the one that implements these changes into laws. Change is constantly happening as America strives towards racial equality and the government plays the biggest role in it. The movements and rebellions serve as powerful causes of change, change that will forever be in the United States history. 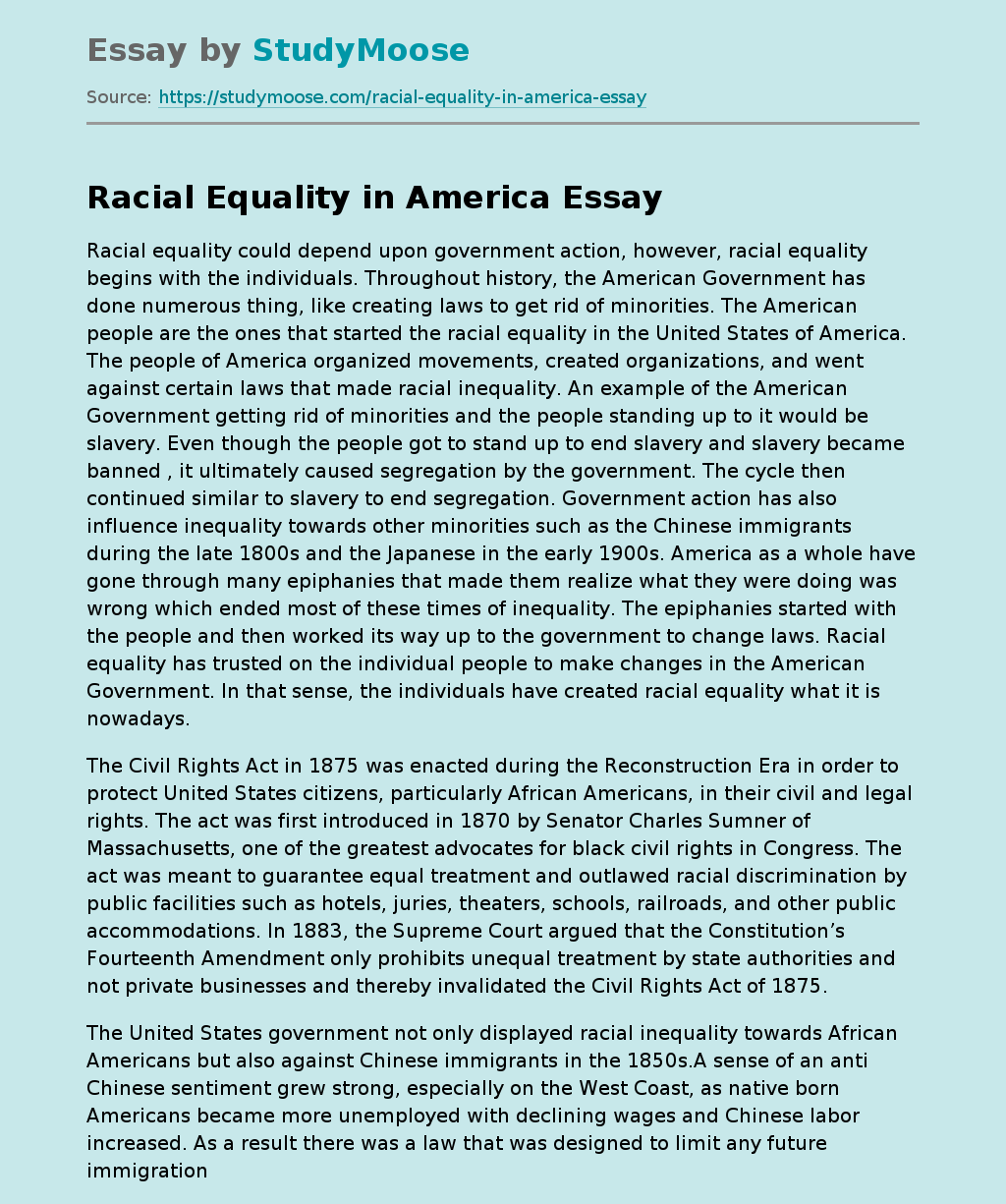