Irony is when there is a situation that is strange because things happen in a way that seems to be the opposite of what you expected. A good example of the word ironic was when New England was settled. Two good examples of the irony during the settlement of New England were the religious and political repressions.

The religious repression in New England was a great example of irony. This is so because Puritan separatist groups moved across an ocean to find religious freedom.

Some went to Holland, but they quickly realized that Dutch culture was not for them. In consequence, some separatists moved to the New World. When they got to New England and landed at Plymouth Rock, they created a theocratic government.

One would be inclined to believe that if you left one-or in some cases, two different countries and sailed all the way across the Atlantic Ocean to find Religious freedom, you would in turn offer it to the inhabitants of your new settlement.

Unfortunately, that is not what happened. When New England began to expand and grow more popular, obviously it became more diverse. At this time, there were people moving into New England that did not fit the criteria that the puritans who described themselves as “saints” did. Since they were a theological government, if those not so pure colonists living in New England were not part of the church, they in turn were not a part of the government.

Stay and adapt to the ways of the strict puritans in some of the colonies of New England, or move to a place more tolerant of religious freedom. It is extremely ironic that the same people who moved thousands of miles away to find a place more accepting to their religion did not feel empathy towards the newcomers that were not the same religion as them, they turned them away at the door.

In hand with the religious repression, the political repression was another good example of irony. During the four month ship-ride to the New World, the puritan “saints” signed a document called the Mayflower Compact. In it, they stated that they would create a civil government. To an extent, they did just that. The civil government that they created just happened to also be a theocratic government. Like it says above, the puritan “saints” were not open to other religions having any freedom.

Since it was a theocratic government, once more people began to move to New England, the government was not a civil government anymore, because you had to be a member of the church to be able to vote or have political power. However, a man named Roger Williams changed that in what came to be Rhode Island. He argued that there must be a separation of church and state to keep the church free from the corruption that comes along with politics. He was banned from Massachusetts,because the church was threatened by his ideology, but that did not stop him.

He then made Rhode Island the only colony at that point in time to have true religious freedom. In time, all of the colonies had religious freedom. For a good stretch of time though the “civil” government that the puritan “saints” claimed they had created was in fact not civil because you had to be a member of the church to have any say at all.

In all, the puritan “saints” that founded New England portrayed two different situations of irony- the religious and political repressions. The religious repression showed irony because they moved countries to find religious freedom, and then did not offer it to the people moving into their settlements. The political repression was a good example of irony because the puritan “saints” had a “civil” government that required you be a member of the church to even be able to vote, let alone be a politician. 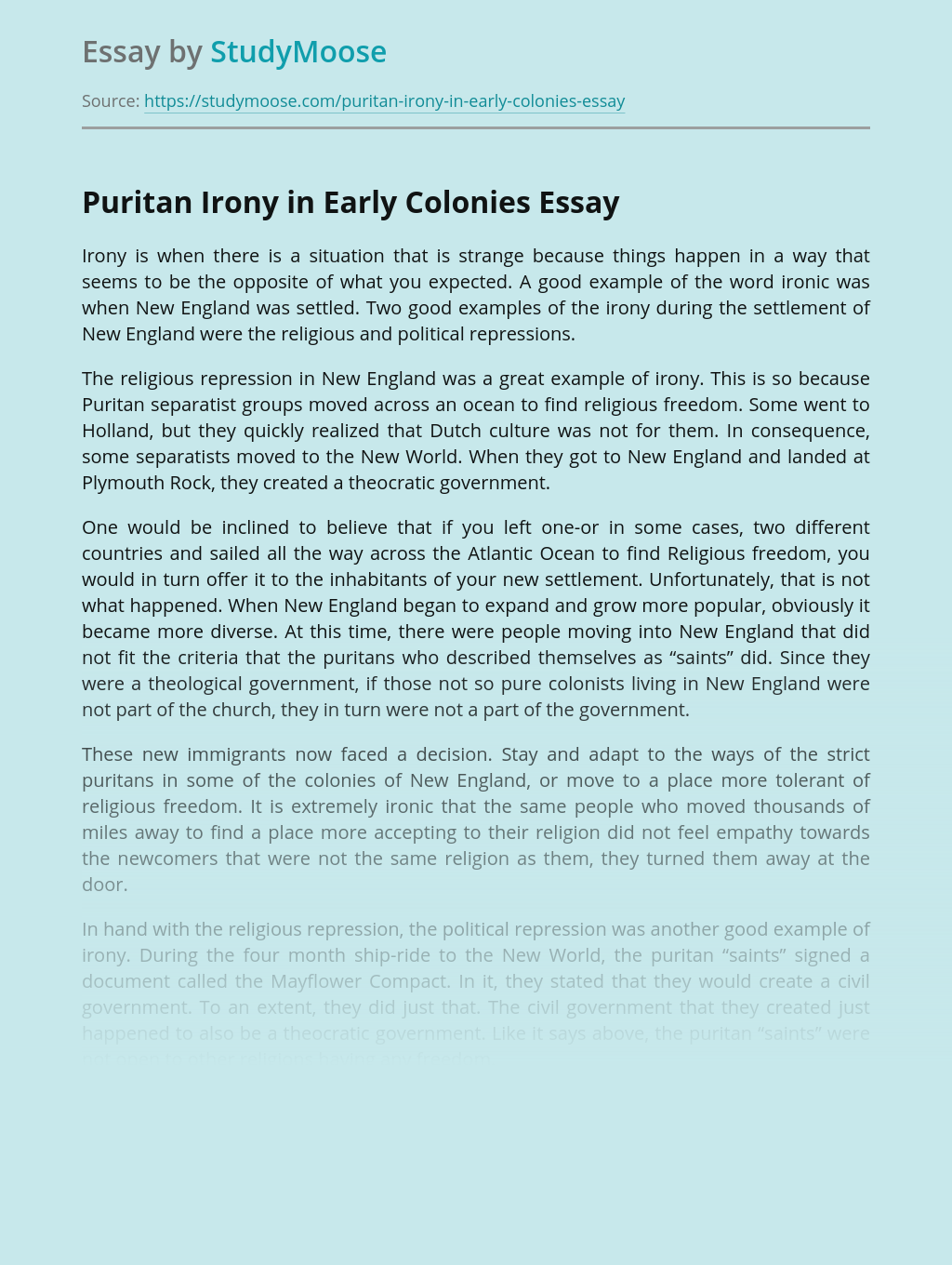