Punctuality in the Military

Punctuality in a military environment is crucial as it enables tasks to be completed, and allows leaders to conduct accountability, PCCs and PCIs for particular operations. Also, depending on the severity or how often a soldier conducts the offense, being late can lead to UCMJ action. This essay will provide in some detail the benefits of being punctual as well as note possible consequences. On a small scale, being punctual for formations and general points of duty allows leaders to ensure accountability for their soldiers, address notes and tasks for the day, and promotes organization within the unit.

Don't use plagiarized sources. Get your custom essay on
“ Punctuality in the Military ”
Get custom paper
NEW! smart matching with writer

In a larger picture, everyone’s responsibilities for the day are dependent on the entire unit to be where they need to be at the appropriate time. For example, in the event of a company going to the range the armor has to be available to open the arms room to issue the weapons as leaders need ample time to take accountability of their soldiers and to thoroughly conduct pre-combat checks and pre-combat inspections.

Support units are obligated to arrive on time due to their responsibility to provide ammunition and transportation. Something as simple as the armor being late can cause a domino effect for the entire mission. Repeated tardiness can cause a lot of issues for the unit but it more than likely can severely impact the soldier making the offense. Leaders may choose to annotate events of tardiness in the service members counseling packet. If the soldier has received enough counseling’s, or if a single event is severe, then the leader can push for administrative action such as filing for an Article 15.

A soldier who is late can be charged with violation to multiple punitive articles prescribed in the UCMJ: Article. 86. Absence without leave

Any person subject to this chapter who through neglect or design misses the movement of a ship, aircraft, or unit with which he is required in the course of duty to move shall be punished as a court-martial may direct. Article 92. Failure to obey order or regulation

Any person subject to this chapter who— (1) violates or fails to obey any lawful general order or regulation; (2) having knowledge of any other lawful order issued by a member of the armed forces, which it is his duty to obey, fails to obey the order; or (3) is derelict in the performance of his duties; shall be punished as a court-martial may direct. Granted, some situations aren’t as severe as other but being late is something that can become a reoccurring issue should it be left to become a habit. A habit like that can lead a soldier to being late for something that is truly serious, like missing movement for deployment or real-world mission. In a situation like that, lateness is a serious offense and can the leave the soldier with heavy consequences. Being late, should it become a chronic problem, can also severely impact a soldier’s professional development.

Not only by having adverse effects within his development in the unit but when it comes to being looked at for schools or professional progression. A good leader is not going to recommend a soldier for Warrior Leaders Course or any tab school if he can’t trust the soldier to be on time. At WLC here on Fort Carson, if you are inexcusably late once then you are not eligible for Commandant’s List even if you have the highest GPA in the academy. If you are late a second time then you can be removed from the academy, if not removed then you can be written a marginal 1059 and with that any soldier looking to the Army as a career will have a difficult, if not impossible, time getting promoted. In a situation like that, it becomes a wasted effort for the academy, or any other NCOES school, a waste and embarrassment for the unit and the leader that recommended the soldier in the first place.

That is time and money being spent on a soldier that may have been seen as having potential to being a great leader but because something as simple as being on time put him in the position to be kicked out then he is stuck either having to redo the course, granted if he gets another opportunity depending on his leaders or the unit. From what I have learned from talking to a senior soldier, there was a point where if a soldier got kicked out of a NCOES school for being late then he is put onto the bottom of the waiting list and most don’t get a second chance at the course. I personally may not be staying in the Army but I still have months before I am out the door. I still need to abide by the Army standard so that I do not either develop bad habits that can hinder my professional development in the civilian sector nor cause myself to be in trouble as I work towards beginning my transition out of the service.

There are ways I can help myself to always be on time, for instance, I can make sure that my alarm is set and is loud enough so I don’t sleep through it. I can set myself enough time in the morning so I don’t have to rush out the door and I have enough of a buffer in the event traffic at the gate decides it’s going to be extra bad one particular morning. If, by all means, I have done everything to prevent myself from being late and the situation still puts me in the position, I am to notify my leadership well before my appointed time.

Punctuality in the Military. (2021, Apr 22). Retrieved from https://studymoose.com/punctuality-in-the-military-essay 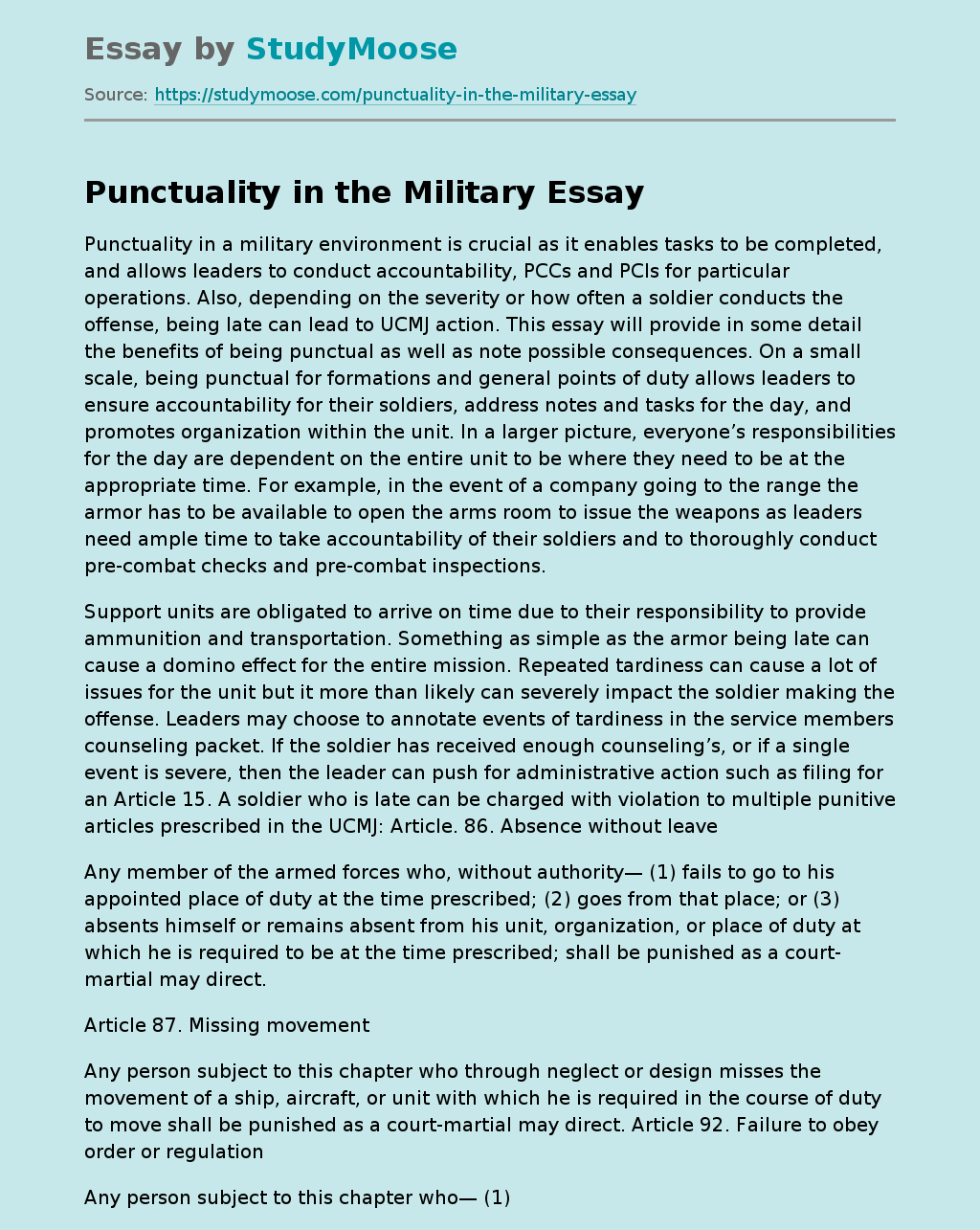