Military Discipline is a state of order and obedience existing within a command. Self discipline in the military is where soldiers do the 4 rights without being told, even in the absence of the commander. Discipline is created within a unit by instilling a sense of confidence and responsibility in each individual. To strengthen discipline, senior leaders need to give praise to their subordinates, either individually or as a whole, for tasks done well. By doing this, it will accomplish every commanders goal of having a unit that functions well and builds a bond which binds together the team.

Don't use plagiarized sources. Get your custom essay on
“ Defining Military Discipline and Values ”
Get custom paper
NEW! smart matching with writer

Everything in life requires some sort of discipline. Whether it is hitting a baseball, learning to sew , playing a musical instrument, making good grades or brushing your teeth it all comes down to a matter of discipline.

The dictionary defines punctual as: Acting or arriving exactly at the time appointed, prompt. Under the rigid and disciplined structure of military life there is no margin for error.

Procrastination or being late may cost lives on the battle field. There are many examples of where being late for something could cause dire consequences, such as showing up later than the appointed time for guard duty could cause a breech in security and cause a brutal massacre of the base. Being punctual also helps your leaders to know where you are at all times. If they do not know where you are they might not know you are sleeping in your bed and might think that you were in a car crash or even kidnapped by terrorists because you chose to display you name or rank at your house.

Loyalty is defined as a strong feeling of support or allegiance. I agree fully with this definition. Being loyal is one of the most important of the Army values. Being loyal is sticking up for someone or something even though it isn’t the normal vernacular or behavior of society or even your social circle. An example is when a soldier is talking bad about an NCO and another soldier sticks up for the NCO not only because they can get into trouble for talking like that, but because it is the right thing to do. It helps build a unit and unites them and builds trust. Missing PT on Wednesday was a prime example of disloyalty. If I was punctual and made sure the alarm was set the night before, I wouldn’t have let the team down. It showed the unit that I couldn’t be trusted with the smallest of tasks, such as being on time. Had I been more disciplines, I would have been more aware of the fact that the alarm was not set.

Duty is the easiest to define. It is doing what you are supposed to do when you are supposed to do it. Simply, it is your job. As air traffic controllers, our first duty priority is to separate aircraft and issue safety alerts as required. If we neglected this priority, then we would lose tons of valuable lives. It was my duty to show up to PT on time. By deselecting this duty I let down my unit. Self discipline is the vital key to duty. If you don’t have self discipline you won’t know what right is, or you will know what it is but you won’t have the discipline to do it. The 4 rights take a lot of discipline. It is our duty to accomplish the 4 rights: right time, right place, right uniform/ equipment, and right attitude. By missing PT, I failed to accomplish all 4 or the rights as I was told to do so.

Respect is an enormous trait in the military. Rank and grade don’t require you to respect someone, it just means they have more experience and you have to listen to them. It takes hard work and discipline to earn and keep someone’s trust and respect. When I am late, my leaders no longer trust that I will be on time for the next formation, class, or appointment. Being punctual is the easiest way to earn someone’s trust and respect. When you are self disciplined enough to be on time it shows your leaders that you can be trusted and they will bestow more responsibility on you and will help you to be a better leader which will make them and your peers respect you more. Respect is one of those things where it takes a long time to earn but you can lose it in an instant and it takes even longer to get back the second time.

Selfless service is looking out for other people even if it won’t benefit you. It is a service which is performed without any expectation of result or award for the person performing it. A great example was when I was out at the Atnavics for the second half of the day pulling guard, the rest of the company got to go home and my NCO came out to relieve me. Even though it was hot and I know he wanted to go home, he let me go home instead. I was being selfish by not being on time. I wasted my chain of commands time to have them call me and find out that I was still sleeping and to waist my battle buddies time waiting for my NCOs to call me. The more disciplined you are the more you realize that by helping out the unit will really benefit you too. When you help your battle buddy with their rucksack so they don’t hurt themselves really you are helping the unit.

That soldier will be able to perform the mission better because you helped him. Had you not, he might have sprained an ankle or pulled a muscle, therefore, not completing the mission because he’s in the hospital. Honor can be defined in so many ways. The way that I define honor is the show of respect and esteem to another. Also, it’s the devotion to ones unit, family or country. By being undisciplined and late to PT on Wednesday, I was showing dishonor rather than honor.

I wasn’t showing that I am devoted to my unit. I wasn’t showing that I am devoted to my country. When I finally arrived to PT a half hour late, it would have been more honorable and disciplined to stay and do PT by myself, rather than leave when I didn’t see any one from my unit. In a way that I was showing honor was the fact that I managed to overcome the fear of being in trouble and still come to PT, even though I was late. If you are dedicated to your unit and are punctual and self disciplined, it will over all help the unit and your leaders keep track of their soldiers and thus, help the morale of the unit.

Integrity ties in a lot with honor. My definition is the ability to admit when you are wrong. According to dictionary.com, integrity is defined as the adherence to moral and ethical principles. I violated my integrity when I showed up to late to PT. If I had been punctual, it would have showed that I have good morals. It would have showed that I believe in the golden rule, do unto others and u would have them do unto you. I would not like it if I was an NCO and I had a soldier late, which then I would have to explain to my supervisor where my soldier was and by me not knowing would reflect bad on me. Another example of the golden rule is if I went to an appointment that I was on time for and the doctor was late, it would reflect that he wasn’t serious about his practice.

Personal courage stands out as the main trait I should have explored to ensure I was on time. I should have had the courage to ask my husband if the alarm was checked or I should have checked it myself without fear of him getting mad at me for double checking. The basic building block of selfless service is the commitment of each team member or soldier to go a little further, endure a little longer, and look a little closer to see how he or she can add to the effort. If each soldier takes the initiative to work just a little harder we can accomplish the mission that much faster and to a better degree. But it takes the whole team as a unit, as one, to attain this goal.

As I strive on to be a better soldier and take the initiative to be a leader in today’s Army, I look a little closer at each of these values. There is always something to work on personally and objectively. To me, being late to PT wasn’t that big of a deal, but if I look at the whole picture it is. If I look deeper as to what m actions are saying, I realize just how important appearance really is. If I am perceived to be a bad soldier that that is the way I will be treated. I will continue to strive to do the right thing and follow the advice of my leaders. 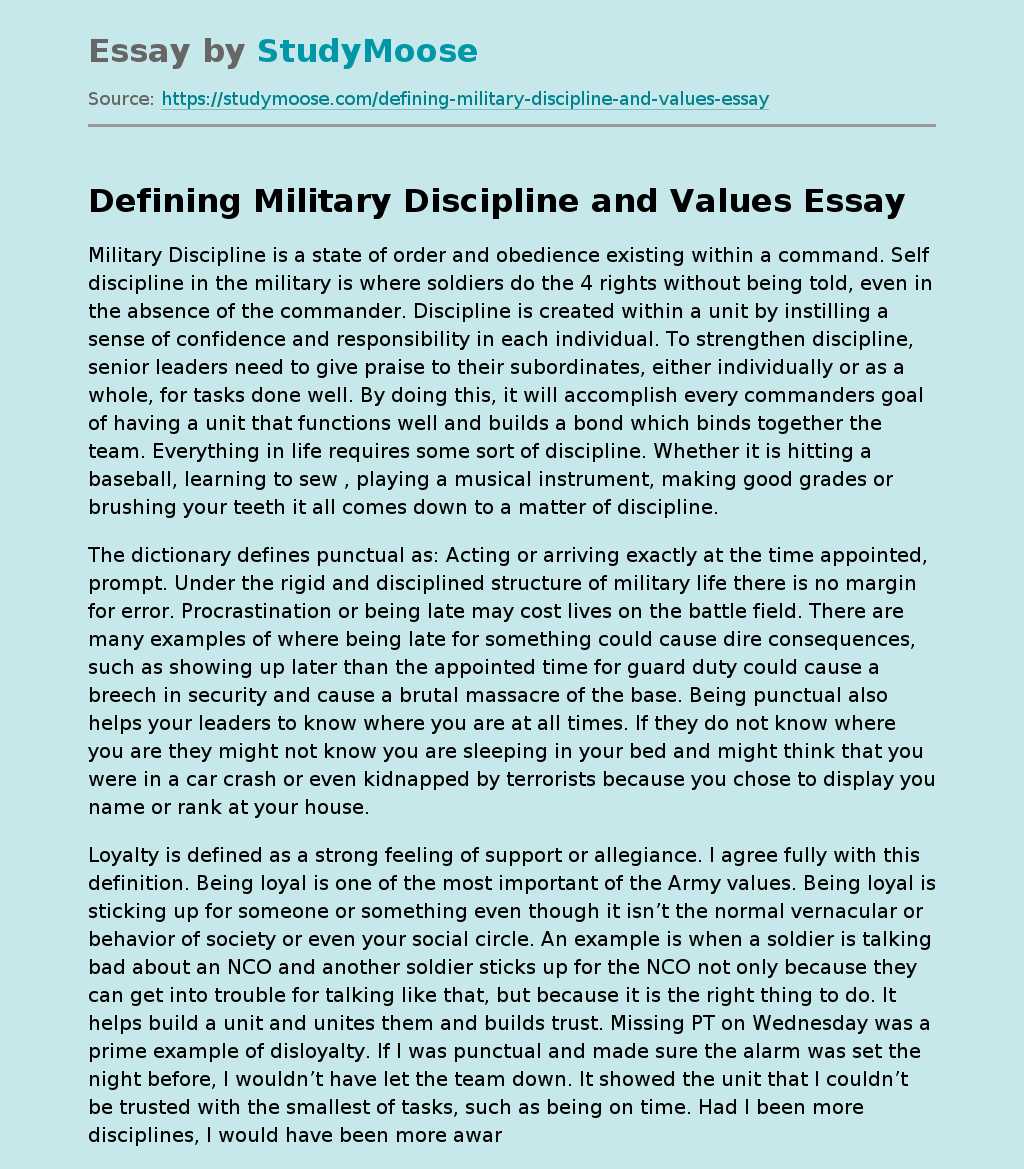