Public workers are needed in today’s society. People such as police officers, teachers, and firefighters all help the community in their own unique and important way. If public workers were to strike imagine how much that would affect the community.

If they do it, they could disturb the peace in the community, but if they don’t they would be stuck with whatever problem was upsetting them and could make matters worse.

Don't use plagiarized sources. Get your custom essay on
“ Public Workers Nowadays ”
Get custom paper
NEW! smart matching with writer

I believe that public workers shouldn’t be able to strike.

If public workers were to go on strike they would be putting the general public or community in danger. Police officers and firefighters protect the community by putting out fires and locking up dangerous criminals.

They keep the public safe. If they were to go on strike and refuse to work, visualize how dangerous the streets would be. No one would put out big fires or stop criminals from killing or stealing.

For example in Boston, in 1919 the police went on a union strike. Criminal went on a massive rampage throughout the city because no one was there to put an end to their crimes. (Found in Why is it Rare for Public Sector Workers to Go on Strike?) Luckily police and firefighters are cleared and will never be able to strike because of events like in Boston.

Secondly, if teachers were to go on strike for whatever the reason, good or bad, they end up putting students and parents in difficult situations. Teachers teach generations of students to become smarter and to learn new skills that can help students in and outside of school.

They also teach us to be more active and to take care of our bodies. Teachers should be thought of highly, but are often overlooked or not even thought about. Sometimes they don’t always get the best treatment. For example in Chicago on September of 2012, a teachers’ strike was held for the first time in 25 years. This was due to difficult working conditions and low pay and benefits. (Found in Why is it Rare for Public Sector Workers to Go on Strike?)

Most people would think that teachers would strike more often, but it’s all about the communities opinion and politics. Teachers have a hard time accomplishing this task because when they strike the students have no place to go all day. The parents have to end up hiring a babysitter or staying with the child.

Most parents might support the teachers at first, but when they have to stay home from work to watch over their child instead of making money, they have a hard time being patient towards the teachers strike. In order for the teachers to win the strike, they have to be seen as worthy and righteous to the public and come out with a better deal.

Lastly, there are better ways to solve conflict rather than striking, mediation and arbitration are two ways that most public workers solve problems. Mediation is when an impartial group oversees negotiation to fix differences. Arbitration is when an independent outsider observes both sides of evidence sent by both arguing sides and decides that is best for all. (Found in Why is it Rare for Public Sector Workers to Go on Strike?)

In conclusion, I believe that public workers shouldn’t be able to strike due to various reasons. When public workers strike they put citizens in the community at risk and changes in schedule that affect parents and children. Instead of striking there are better ways to solve conflict like mediation and arbitration.

This way no one seems to be affected or hurt. No one has to hold up signs or demand better work conditions. It can be solved through more peaceful ways to that in the end everyone in the community is happy and no one is extremely affected. 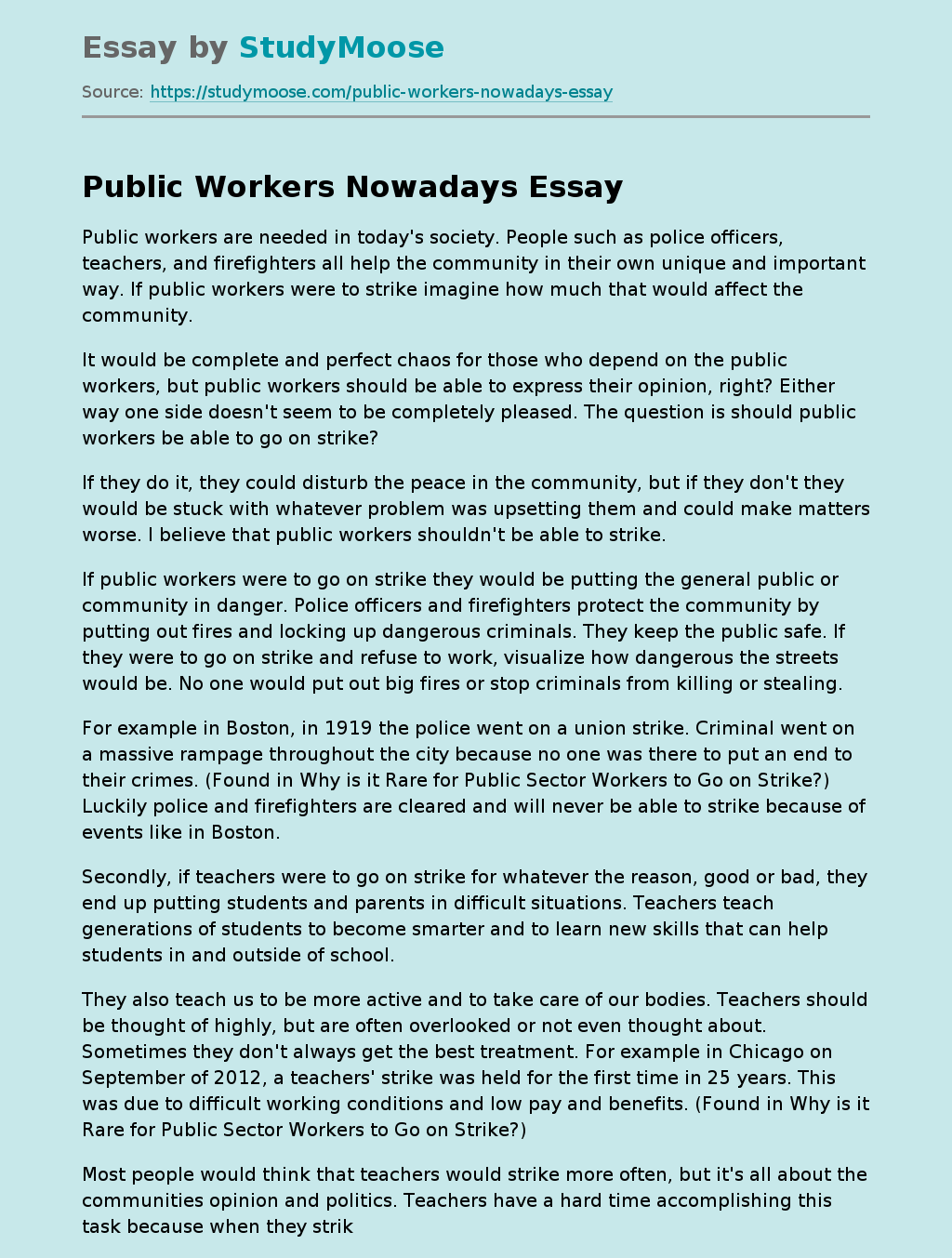