Throughout history the lives of the people in the working class have not always been easy. People always work hard to earn money and support their families; however, people don’t always work in a suitable working area. The term “Blue Collar” is jobs that require manual labor from people. The problem with these kinds of jobs is that the places the people work in can be extremely unsanitary and may cause a bad working environment for the people in it.

Blue collar work is also the work most people do not want to do but it is needed for the people who do white collar jobs to prosper. Also blue collar workers are known as people who did not do well in school or people that aren’t smart. Well that is not the case with these workers because without them we wouldn’t be able to do some of the things we do now or be able to survive.

Also some blue collar workers are called undocumented workers in which they don’t have any documents to prove that they can work or are from this country but help the country in doing jobs that are needed for a low wage.

Therefore blue collar workers are a very important part to society and we need them to thrive. For example in “Made in L.A” there are 3 young Latina immigrants who work in Los Angeles sweatshops they do manual labor for an extremely low wage. Even though they did the same work as others they got paid less because they are immigrants, it is hard work with low wages but they continue to do it to support themselves and their family just like the blue collar workers do nowadays.

With the little voice they had, they protested and tried to make a difference for all future immigrant workers not to be treated inferior to them. People in blue collar jobs get paid less than white collar workers which are office work but they enjoy their job other than others even though it is dirty. Even though the U.S has strict policies on immigrants, they are actually needed because they do many of the blue collar jobs that are needed in the country. For example in the article “Putting a Stop to Slave Labor” it says that”

If we required good documents starting tomorrow, the nation would plunge into an instantaneous economic crisis” (p156). This would happen due the fact that they do most of the jobs that people don’t want to do and get low wages also which are blue collar jobs. There are many instances of unsanitary work places. In the article “Migrant Farm Worker,” by Studs Terkel shows the conditions of the working place and also shows child labor. He says the animals were being treated better than the workers themselves. “Veterinarians tend to the needs of domestic animals but they can’t have medical care for the workers.”(p133) this shows that the bosses who supply these people with blue collar jobs are being taken advantage of and that the animals are living better than the workers. Also this goes to show what little care the bosses had for their people and that they only cared about the money instead of the needs of these people.

People need to see the working class as people rather than machines that do something over and over again. Just because someone has to work hours in front of a machine and have a dirty job does not mean that the person is not a human being. There are many people needed in the world to do some jobs that which most people would not do. If we didn’t have those kind of people and if everyone wanted to do the same thing as everyone else than we would have a hard time surviving since it is needed to be done. “The case for working with your Hands,” states “More fundamentally, now as ever, somebody has to actually do things: fix our cars, unclog our toilets, and build our houses.”(18) This goes to show that if no one does those jobs there would be a lot of problems and that we always are going to need blue collar workers perhaps more than white collar in most cases.

“The Case for Working with Your Hands,” also states “The trades suffer from low prestige and I believe this is based on a simple mistake. Because work is dirty, many people assume it is also stupid.”(19) The thing that people don’t realize is that not every job is going to appeal to them because we are all different and different people do different things, just as some people like to sit behind a computer everyday some people will not do that. The treatment of workers is a growing issue and it’s going to keep on growing and growing if people don’t realize what these big companies are doing and put a stop to it. For example the shoe company Nike employs many people but the thing people don’t know is that there are 12,000 young women in Indonesia making the lowest amount of money and working long tiring shifts.

Every $80 sneaker Nike makes it only costs them 12 cents for the labor. This shows the unfair treatment of these workers and how the company is taking advantage of them and it is not only Nike doing this but any major company uses the same force of labor. In “Who Makes the Clothes We Wear?” it says “Government officials raided a sweatshop filled with immigrant Thai women laboring as little as 59 cents per hour.”Also not only were they being taken advantage of the discipline was enforced by threats of rape and beatings.(26)

This goes to show the little care they have for these workers and the actions that are being taken against them. It also shows a dark side to these companies in which the workers are being treated worst than dogs. In the article “Reapers” by Jean Toomer it says that “Black horses drive a mower through the weeds and there, a field rat, startled, squealing bleeds, His belly close to ground. I see the blade, Blood-stained, continue cutting weeds and shade.” (37) This article shows tough field work for black people back around the 60s. They were bleeding but their determination was too great and they continued to go and do their work.

Slavery could be identified as blue collar work also. In the article “What to the Slave is the Fourth of July?” Frederick Douglass says “There is not a man beneath the canopy of heaven who does not know that slavery is wrong for him.” (140)This shows that everyone knows that slavery is wrong but they continue to do it disregard the health of the workers but the financial health of a company or a person. Slaves have to endure much pain and long haggard days with little to no pay working out on the fields and any other job that another man won’t do. Just like the slaves do these kinds of work the women in Indonesia could be compared to them because of the long working hours and the little pay with strict discipline. There is a growing problem with Third World women and how they are being used.

The companies get young girls and give them work usually being blue collar work with bad working conditions and poor pay. In the article “Life on the Global Assembly Line,” it says “Older” women, aged 23 or 24, are likely to be laid off and not rehired. The lucky ones find husbands. The unlucky ones find themselves at the margins of society-as bar girls, “hostesses,” or prostitutes.”(29) This displays the women as disposable workers; once they get too old they are thrown out and out of a job.

After that these women don’t have anywhere to go, some get a husband and are being taken care of and others have to resort to whatever that is needed to be done to get by. Although the problems to these blue collar workers are plain to see, the fact is that the country needs them for the economy to thrive. Even if blue collar workers are needed to have a successful economy it doesn’t change the fact that they need to be treated like people and not like dogs on the street. 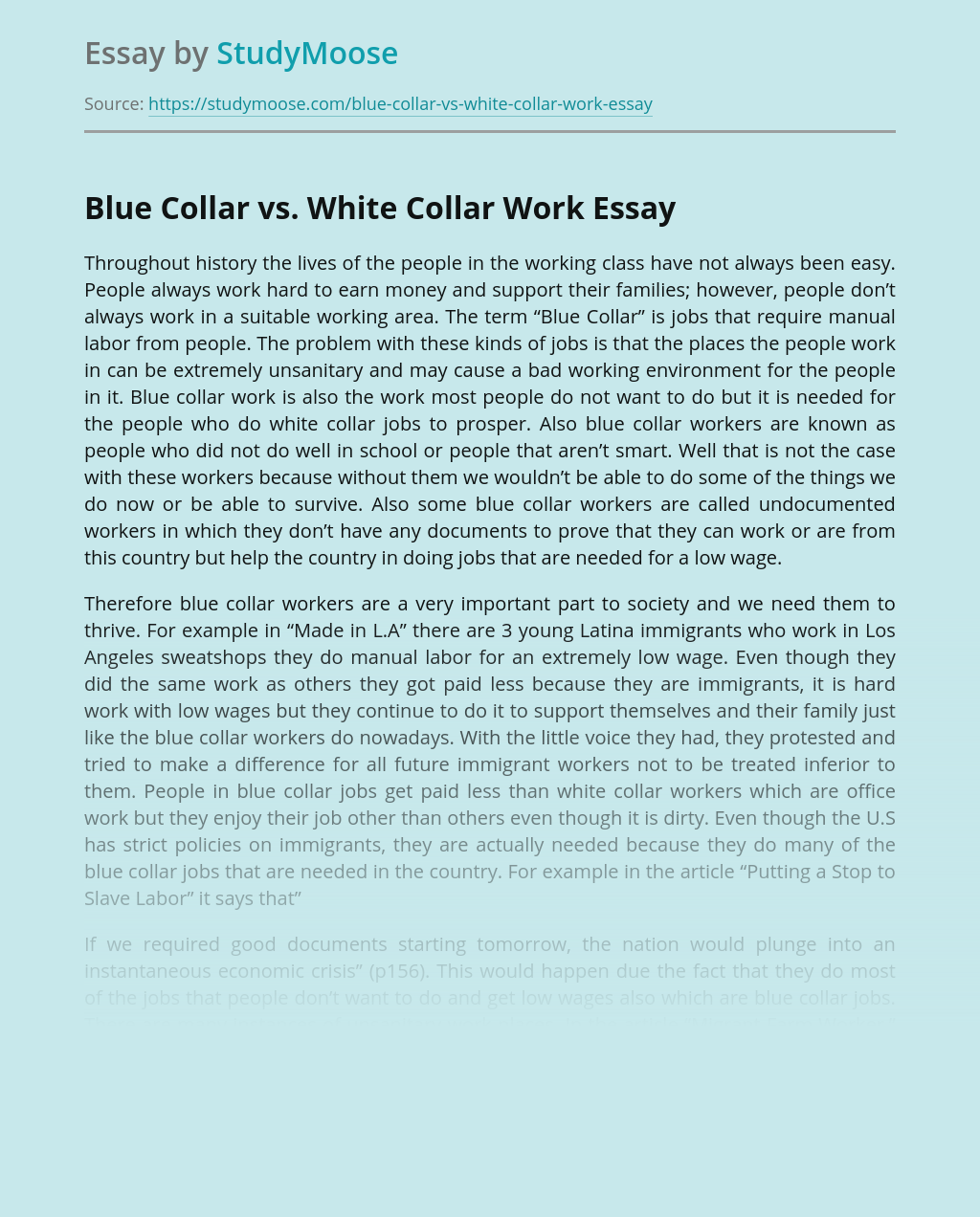