In Milan Kundera’s book, Testaments Betrayed, he contends that people act very differently when they are in public compared to their private lives. Milan appropriately emphasizes the need for separation between one’s public and private life, and asserts that the real criminals are the ones who attempt to break that boundary. Logically, people will say and do things when they are alone that would be beyond the realm of appropriate behavior when they are in public. Therefore, I agree with Kundera’s claim that the curtain between these two worlds should not be tampered with and that the curtain-rippers are the actual offenders.

There are many times where national chaos and embarrassment has been created through people meddling in the private lives of other people. For example, the paparazzi are constantly trying to expose the personal experiences of countless celebrities. Recently they succeeded with the infiltration of the universal picture-messaging application, Snapchat, as well as Apple’s coveted web-based storage facility, the iCloud.

These hackers were able to obtain numerous explicit photographs of renowned actresses, including Jennifer Lawrence and Victoria Justice, and distribute them for the world to see. This is extremely embarrassing to those women and, much to their chagrin, those pictures meant for somebody close and important to them are now being hungrily consumed by the eyes of some 12-year old kid on their laptop.

Since this barrier between private and personal life was broken by meddlers, these celebrities are now viewed as indecent, and have lost much of the admiration they had before the incident.

How could the exposure of one’s private life to the entire world possibly be considered just? These ladies did nothing wrong, yet they are harshly criticized for their actions because somebody wanted to interfere in their private lives. This incident clearly demonstrates that the insatiable paparazzi, not the innocent celebrities, are the true criminals here.

Our nation’s history also holds many instances of interferers meddling in the private lives of our elected officials. One such example would be Bill Clinton’s affair with Monica Lewinsky. Yes, he did cheat on his wife, but was it really fair to let the entire world know that he did that? When the government was informed about the situation, the president’s unfortunate predicament was broadcast to the entire nation. The situation escalated to the point of unjustified impeachment hearings, but fortunately Clinton was acquitted by the Senate.

Clinton nearly lost his beloved wife and his job because his private life was exposed by those who had no right to be sticking their noses into his personal affairs. The peeping Toms that yanked open the curtain between Clinton’s actions backstage and his affairs in the public’s spotlight completely ruined Clinton’s life. If these felons hadn’t intruded, Clinton would have been spared a world full of ignominy and embarrassment. Therefore, it is indisputable that the ones truly at fault are the criminals who exposed Clinton, because his lives, both private and public, were devastated by their irresponsible actions.

In summary, past invasions of privacy have shown that many negative effects may result from such rash and unprovoked actions. It is therefore only just and proper that the steel grate between one’s private and public lives remain forever and eternally sealed. 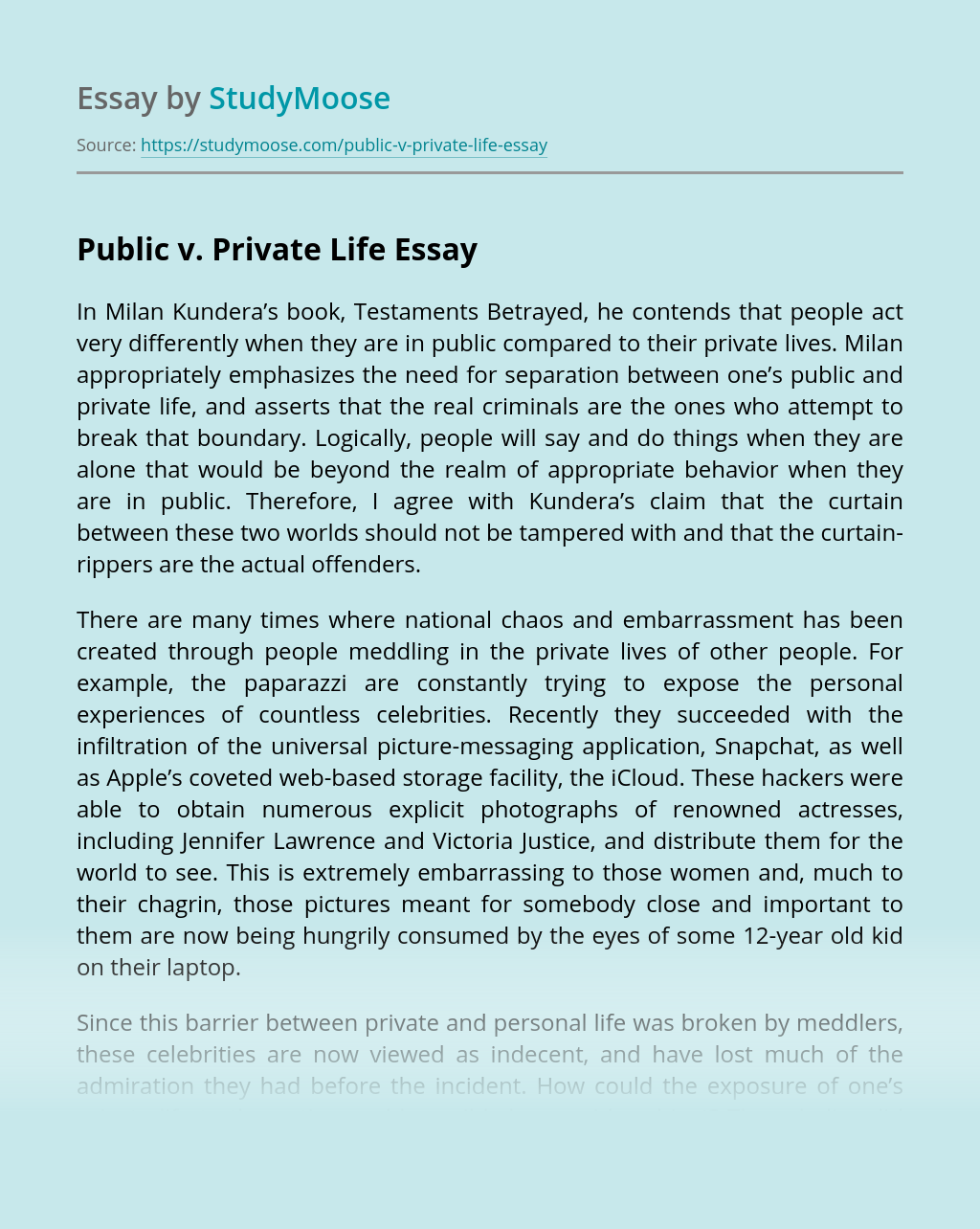